Microchips in Medicine Market Segmentation by Application (Drug Administration, Home Monitoring, and Others); and by End-User (Hospital, Research Centers, and Others) – Global Demand Analysis & Opportunity Outlook 2030

The global microchips in medicine market is estimated to grow at a substantial CAGR over the forecast period, i.e., 2022 – 2030. The growth of the market can be attributed to the increasing adoption of advanced technology in the medical industry. Although microchips are still in a conceptual stage, they are considered to be the future of healthcare, finding application in drug delivery, hormone regulation, and others. Moreover, scientists believe that microchips can be functioned to treat neurological diseases, including epilepsy and bodily paralyses. According to the report by the World Health Organization (WHO), 50 million people suffer with epilepsy globally, out of which 80% people live in middle and low-income countries. 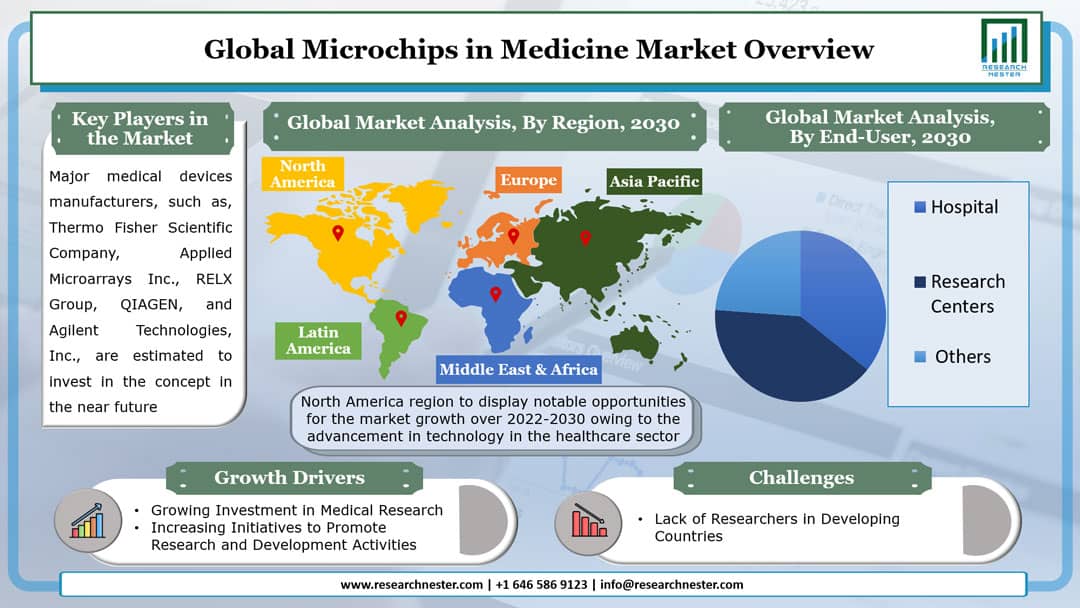 Furthermore, the growing investment in medical research and development activities, especially in developed economies, is estimated to boost the market. For instance, in the U.S., the medical and health research & development expenditure grew by almost 6% between 2017 to 2018. The market is segmented by application into drug administration, home monitoring, and others, out of which, the drug administration segment is anticipated to hold the notable share in the global microchips in medicine market over the forecast period. This can be attributed to the ease of targeted drug delivery and slow release of drugs, which can be attained through microchips.

On the basis of geographical analysis, the global microchips in medicine market is segmented into five major regions including North America, Europe, Asia Pacific, Latin America and Middle East & Africa region. The market in the Europe region is estimated to witness noteworthy growth over the forecast period on the back of increasing government and private investment in the healthcare sector, coupled with the advancement in technology.

The market in the North America region is anticipated to gain the largest market share throughout the forecast period owing to the high cases of neurological disorders, along with improving medical services. According to the Pan American Health Organization, 47.4 out of every 100,000 people died due to neurological diseases in the United States, as of 2019. 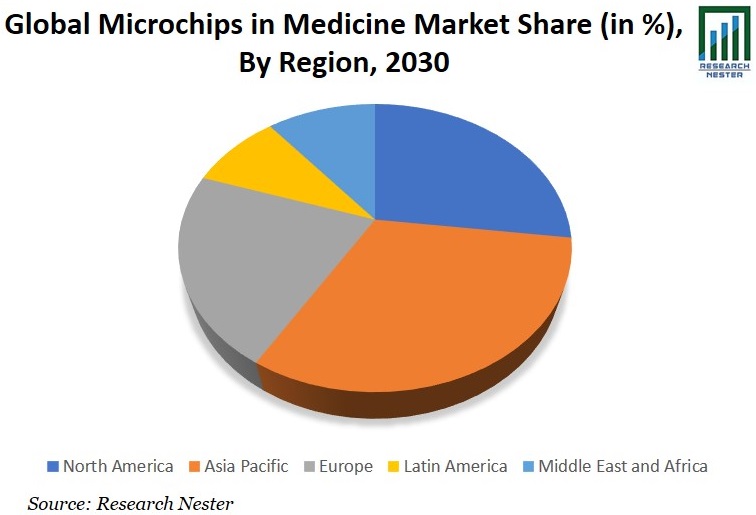 The global microchips in medicine market is further classified on the basis of region as follows:

Our in-depth analysis of the global microchips in medicine market includes the following segments:

Microchips in medicine is still a concept, which is anticipated to materialize in the upcoming decade. Major medical devices manufacturers, such as, Thermo Fisher Scientific Company, Applied Microarrays Inc., RELX Group, QIAGEN, and Agilent Technologies, Inc., are estimated to invest in the concept in the near future.

1) What are the major factors driving the growth of the microchips in medicine market?

Ans: The growing adoption of technology in healthcare sector is estimated to boost the market growth.

2) What would be the CAGR of microchips in medicine market over the forecast period?

3) What are the challenges affecting the microchips in medicine market growth?

Ans: Slow materialization of concepts, and absence of researchers in low-income economies are estimated to hamper the market growth.

4) Which region will provide more business opportunities for growth of microchips in medicine market in future?

Ans: The market in the North America region is estimated to provide more business opportunities over the forecast period owing to the advancement in medical technology in the region.

5) Who are the major players dominating the microchips in medicine market?

Ans: The major medical devices and equipment manufacturers, including Thermo Fisher Scientific Company, QIAGEN, and Agilent Technologies, Inc., are estimated to enter the market in the upcoming years.

7) What are the segments in the microchips in medicine market?

Ans: The market is segmented by application, end-user, and by region.

8) Which segment captures the largest market size in end-user segment in the microchips in medicine market?

Ans: The research centers segment is anticipated to hold largest market size in value over the forecast period and display significant growth opportunities.