The global micro turbines market is estimated to garner a substantial revenue by growing at a CAGR of ~9% over the forecast period, i.e., 2022 – 2030. The growth of the market can be primarily attributed to the growing demand for electricity across the globe. In 2018, more than 23,000 billion kilowatt hours of electricity was consumed around the world, up from 22,000 billion kilowatt hours in the year 2017. Moreover, most of the microturbines are about the size of a refrigerator and have extremely low nitrogen oxide emissions into the air. As governments all around the world are making constant efforts to reduce greenhouse emissions, the sales of microturbines are expected to observe upsurge in the forthcoming years. Furthermore, largescale replacement of phased out coal and nuclear plants with natural gas-fired power generation plants, and escalating emphasis of developed countries on achieving energy efficiency targets are projected to offer profitable opportunities to the market in the near future. 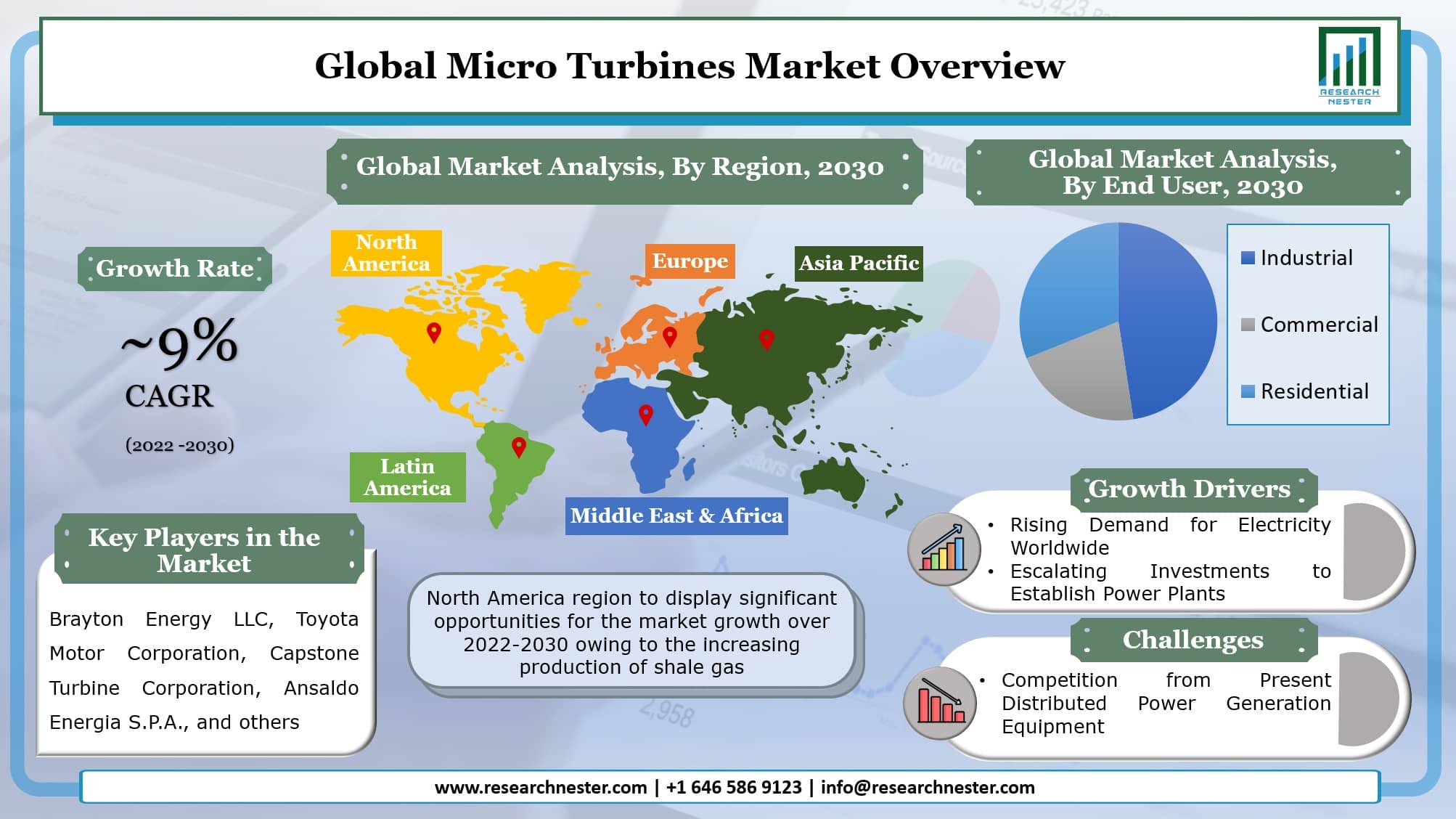 The market is segmented by end user into industrial, commercial, and residential, out of which, the industrial segment is anticipated to hold the largest share in the global micro turbines market. This can be accounted to the high usage of micro turbines in several industries including construction, oil & gas, pharmaceutical and wastewater treatment for cutting down on energy costs. On the other hand, the commercial segment is assessed to observe significant growth in the future ascribing to the increasing number of sports complexes, shopping malls and hotels. Additionally, on the basis of power rating, the 12-50 kW segment is predicted to acquire the largest share during the forecast period owing to the ability of turbines with this rating to utilize less energy, which in turn is evaluated to decrease the energy expense of household consumers.

In 2018, the world’s total energy supply was 14282 Mtoe, wherein the highest share in terms of source was captured by oil, accounting for 31.6%, followed by coal (26.9%), natural gas (22.8%), biofuels and waste (9.3%), nuclear (4.9%), hydro (2.5%), and other (2.0%). Where there was an increase in energy demand in 2018, the year 2019 witnessed slow growth as the energy efficiency improved owing to decline in the demand for cooling and heating. However, in 2020, the electricity demand decreased by 2.5% in the first quarter of 2020 due to the outbreak of Coronavirus resulting in government-7imposed shutdowns in order to limit the spread of the virus, which was further followed by shutdown of numerous business operations impacting their growth. This also resulted in decline of 5.8% in the worldwide CO2 emissions which was recorded to be five times larger than the one recorded during the global financial crisis in 2009. However, in 2021, the demand for oil, gas and coal is estimated to witness growth, which is further projected to create opportunities for market growth. Moreover, rising environment degradation and awareness related to climate change is motivating many key players to employ sustainable energy strategies and invest significantly in environment-friendly power generation technologies with an aim to promote sustainable development among various nations around the world. Such factors are anticipated to promote the growth of the market in upcoming years.

On the basis of geographical analysis, the global micro turbines market is segmented into five major regions including North America, Europe, Asia Pacific, Latin America and the Middle East & Africa region. The market in North America is estimated to grab the largest share over the forecast period on the back of the large number of aging power plants, and government initiatives to improve energy infrastructure in the region. In addition, strong presence of major market players is also predicted to drive market growth in the region in the coming years. Moreover, Europe is anticipated to be the second largest shareholder in the market during the forecast period attributing to the stringent government regulations regarding reducing emissions, and increasing establishment of micro turbines, especially in Norway, Netherlands and Finland. As per the European Climate Law, Europe’s economy and society are projected to become climate-neutral by 2050. The law sets the intermediate target of reducing greenhouse emissions by at least 55 percent by 2030, compared to the 1990 levels. 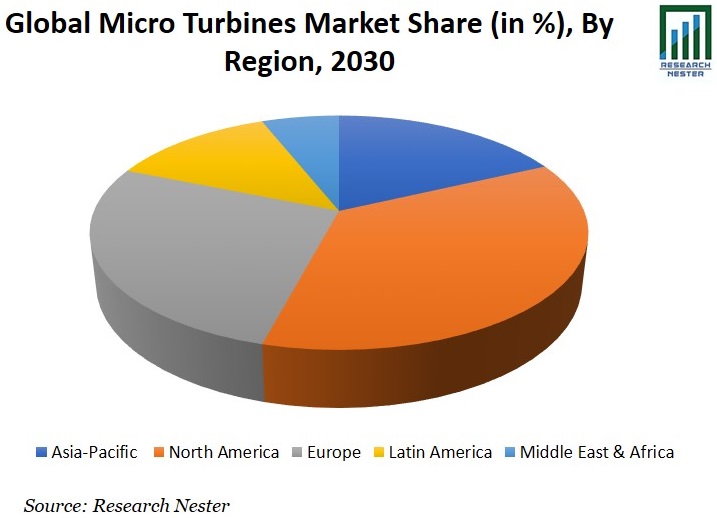 The global micro turbines market is further classified on the basis of region as follows:

Our in-depth analysis of the global micro turbines market includes the following segments:

What are the major factors driving the growth of the micro turbines market?

What would be the CAGR of micro turbines market over the forecast period?

What are the challenges affecting the micro turbines market growth?

Which region will provide more business opportunities for growth of micro turbines market in future?

North America will provide more business opportunities for market growth owing to the large number of aging power plants in the region.

Who are the major players dominating the micro turbines market?

What are the segments in the micro turbines market?

The market is segmented by application, power rating, end user, and by region.

Which segment captures the largest market size in the end user segment in the micro turbines market?

The industrial segment is anticipated to hold largest market size in value and is estimated to grow at a steady CAGR over the forecast period and display significant growth opportunities.