Medical marijuana or cannabis refers to the drug used for the treatment of people suffering from various diseases. The drug is not available publicly as it is harmful if not handled carefully. It is also referred to as a recreational drug. The substance that the drug contains has mind-altering effects and is known as THC (delta- 9- tetrahydrocannabinol) and the amount of this substance varies depending upon the purpose. The drug is used to treat several diseases such as cancer, arthritis, AIDS, cachexia, chronic pain, and other diseases.

The medical marijuana market is anticipated to grow at a significant CAGR globally during the forecast period 2020-2028. The increased acceptability of the drug as a medicine and for usage by adults is anticipated to aid in the growth of the market. The product is being widely accepted as a pharmaceutical medicine as it helps in the treatment of several diseases.

The market for medical marijuana is anticipated to expand as the medicine is used in several medical conditions, therapies, and chronic diseases. Moreover, the medicine is also used by adults to get rid of chronic and severe pain.

The market is segmented by end- user, by product, by application, and by region. On the basis of end user, the market is segmented into hospitals, clinics and others, and the segment for hospitals is anticipated to hold the leading market share as these institutions use the medicine to treat chronic diseases and for therapies as well. Moreover, the drug can only be used if there is a prescription in several regions.

Medical marijuana is anticipated to experience high demand as the number of health disorders in adults is increasing. The spread of chronic pain diseases is higher in adults and elderly people. The therapies that are conducted to relieve them from pain use this medicine since it can help in reducing pain. According to WHO, cancer was the second major disease that caused deaths globally in 2018 and has accounted for 9.6 million deaths. This puts emphasis on the increasing need for medical marijuana worldwide.

The market has a lot of opportunities to expand. Primarily, it is a medicine and is being accepted widely. Secondly, the benefits of this medicine are widely known. Lastly, the product is required for the treatment of major diseases such as cancer, arthritis, chronic pain, and many more. This makes the product crucial and is required everywhere around the globe.

Marijuana is a drug that can leave a negative impact on the health of a person if mishandled. This creates a threat to the market growth. The drug is not legalized everywhere. Further, it is a recreational drug and it can leave symptoms including altering the mind, addiction, and others if it is not used as prescribed by the doctors. Another hindrance to the market can be the regulations imposed by the government on the usage of the medicine.

Our in-depth analysis of the medical marijuana market includes the following segments:

On the basis of region-wise analysis, the medical marijuana market is segmented into five major regions including North America, Europe, Asia Pacific, Latin America, and the Middle East & Africa region. The North America medical marijuana market holds the maximum share of the market. This is a result of the legalization of the drug in several parts of the region and increased knowledge of the medicinal properties of the drug. Other regions that are legalizing the drug concerning the therapeutic properties of marijuana are Europe and Latin America. Further, the market in Asia Pacific region is a lucrative market option for marijuana as the medicinal properties of the drug are anticipated to result in a high acceptance of the drug in this region. This may end up in the legalization of the drug in this region considering the medical benefits. 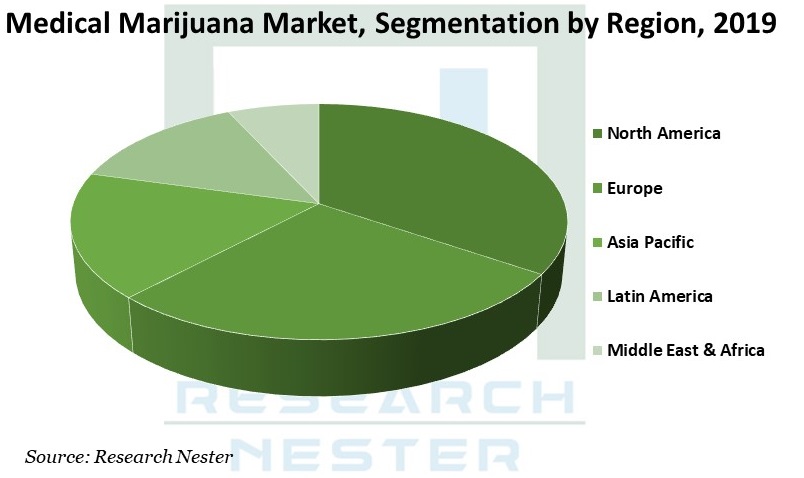 Medical marijuana market is further classified on the basis of region as mentioned below:

Dominating Players In The Market