The lithium-ion battery recycling market is anticipated to record a noteworthy CAGR over the forecast period, i.e., 2021 – 2029. The growth of the market can be attributed to the rising use of battery-operated electric vehicles, and the increasing level of air pollution in recent years due to combustion of diesel and gasoline in conventional automobiles. The total number of electric vehicles (EV) sold worldwide grew by approximately 2 million from 2018 to 2019. More than 7 million EVs were sold in 2019. Apart from these, growing concerns regarding battery disposal and decline in the price of lithium-ion batteries are also estimated to drive market growth in the coming years. Furthermore, the properties of lithium-ion batteries such as favorable capacity-to-weight ratio and lower self-discharge rate than other batteries are expected to boost their demand in the near future.

The market is segmented by chemistry into lithium-manganese oxide (LMO), lithium-titanate oxide (LTO), lithium-nickel cobalt aluminum oxide (NCA), lithium-nickel manganese cobalt (Li-NMC), lithium-iron phosphate (LFP), and lithium-cobalt oxide (LCO), out of which, the lithium-nickel manganese cobalt segment is estimated to hold the leading share over the forecast period on the back of growing adoption of lithium-nickel manganese cobalt batteries for power tools, electric powertrain, and medical devices. Additionally, based on industry, the automotive segment is projected to grab the largest market share by the end of 2029 owing to the staggering adoption of lithium-ion batteries as a result of the ability of these batteries offer high energy and power density to the vehicle. The segment for power industry is also projected to hold a significant market share, which can be credited to the increasing production volumes for the end user of this industry in developing nations. 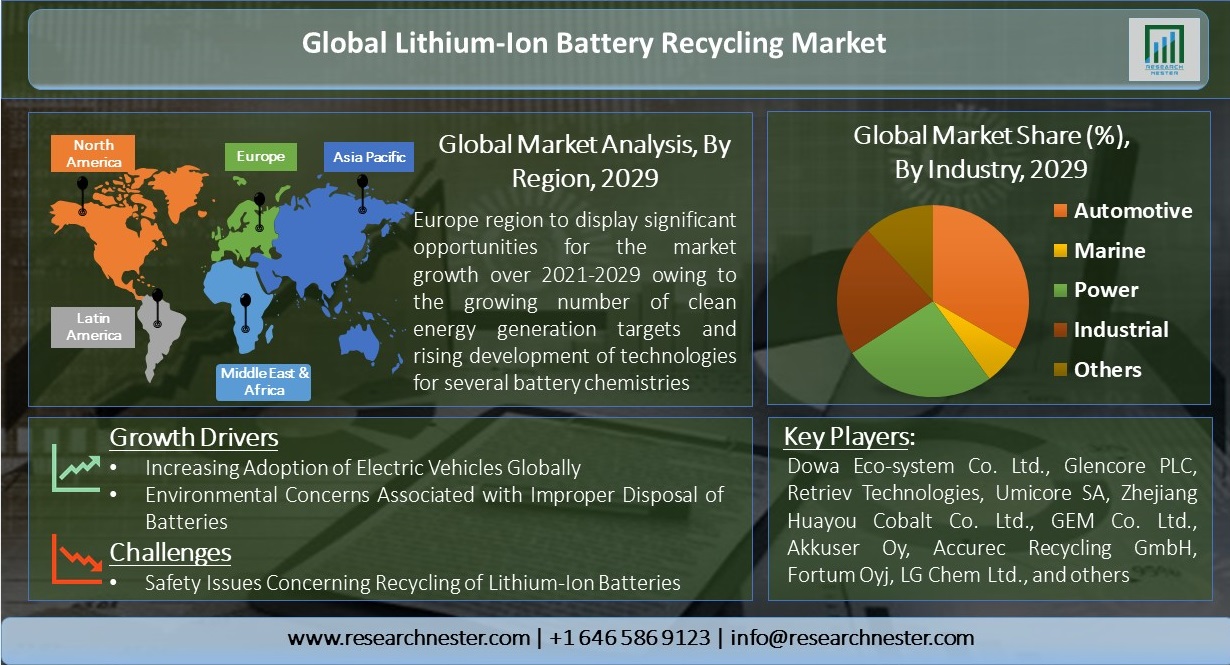 On the basis of geographical analysis, the lithium-ion battery recycling market is segmented into five major regions, including North America, Europe, Asia Pacific, Latin America and the Middle East & Africa. The Asia-Pacific region is expected to grab the largest share in the market during the forecast period on the back of the rising demand for electric vehicles in major economies of the region such as Japan, China, and India. In addition, China is currently the largest manufacturer of lithium-ion battery for electric vehicles. China manufactured more than 70% of total lithium cells in the world in 2019. Moreover, increasing R&D investment by Indian government for developing efficient hybrid vehicles is also anticipated to fuel the growth of the region. Furthermore, Europe is expected to witness significant market growth in the forecast period owing to huge number of clean energy generation targets in the region and growing willingness of companies to develop technologies to treat different types of battery chemistries. 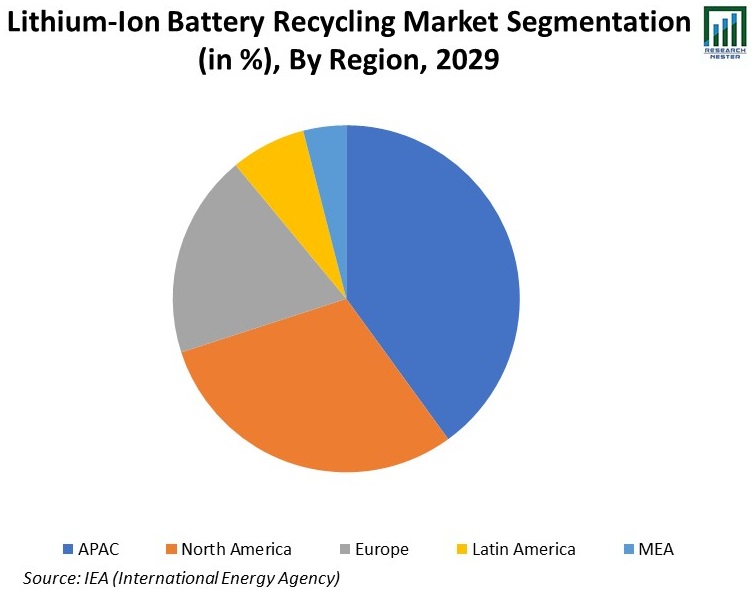 The lithium-ion battery recycling market is further classified on the basis of region as follows:

Our in-depth analysis of the lithium-ion battery recycling market includes the following segments:

What are the major factors driving the growth of the lithium-ion battery recycling market?

Growing adoption of electric vehicles and environmental concerns associated with safe disposal of used batteries are major growth drivers for the market.

What would be the CAGR of lithium-ion battery recycling market over the forecast period?

What are the challenges affecting the lithium-ion battery recycling market growth?

Safety concerns regarding recycling of lithium-ion batteries is estimated to hamper the market growth.

Which region will provide more business opportunities for growth of lithium-ion battery recycling market in future?

Europe will provide more business growth opportunities in the future owing to the large clean energy generation targets in the region.

Who are the major players dominating the lithium-ion battery recycling market?

What are the segments in the lithium-ion battery recycling market?

The market is segmented by chemistry, technology, industry, and by region.

Which segment captures the largest market size in the industry segment in the lithium-ion battery recycling market?

The automotive segment is anticipated to hold largest market size and is estimated to grow at a notable CAGR over the forecast period and display significant growth opportunities.