The global liquid biopsy market attained revenue of USD 3167.8 Million in 2019 and is estimated to garner USD 25874.4 Million in 2028 by growing at a CAGR of 30.7% over the forecast period i.e., 2020-2028. The growth of the market can be attributed to the increasing advancements in medical research, as well as the rising concern for the increasing prevalence of chronic diseases worldwide. Global cancer incidences are on the rise, with breast cancer being the most prevalent among all cancers. The increase in cancer occurrences drives technological advances for diagnostic and treatment fields to ensure cancer detection and treatment and decrease the mortality rates. All cancers release various cells, genetic material, and other cellular components into the bloodstream that can be used to detect specific markers to diagnose them. Liquid biopsy has seen significant advancements in technology and a rise in its clinical and research application. While tissue biopsy remains the gold standard in cancer diagnosis and treatment, liquid biopsy in conjunction with other diagnostic approaches can be vital in diagnosing cancers as treatment at an early stage has a higher probability of cure. According to the statistical report GLOBOCAN 2020 released by the International Agency for Research on Cancer (IARC), stated that in the year 2020, a total of 19.3 Million cancer cases were registered globally. Moreover, a total of 10 Million deaths caused due to cancer was also registered in the same year. 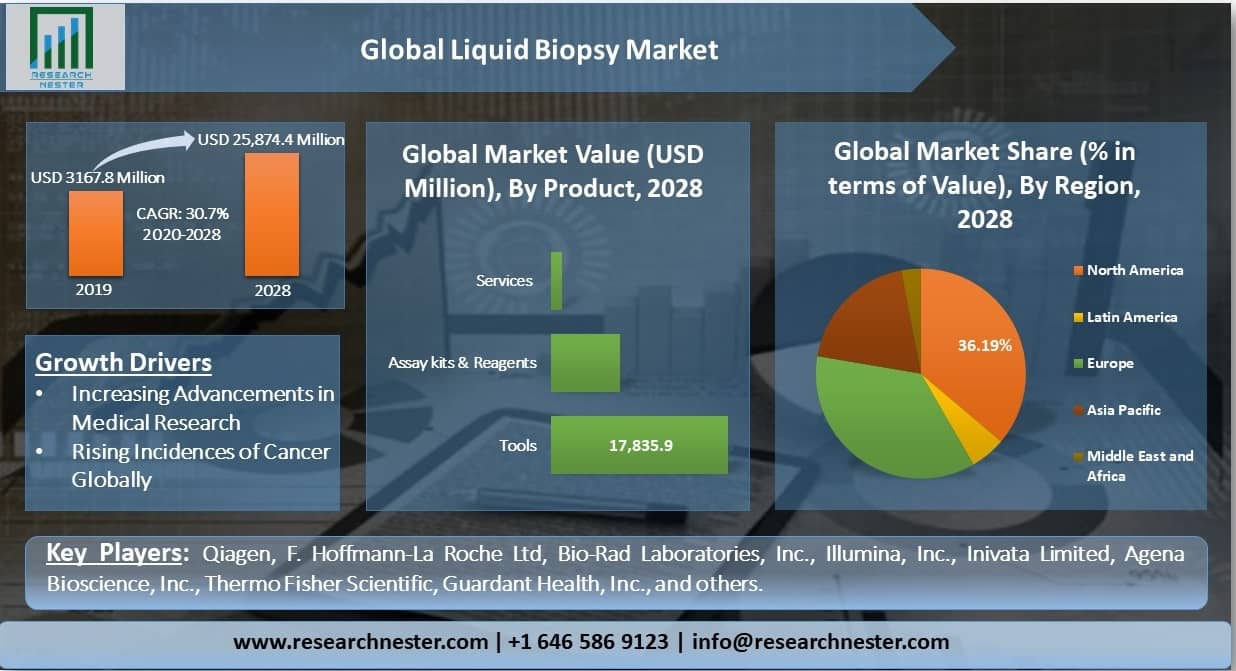 Furthermore, tremendous progress has been made in all medicine sectors, both diagnostic and curative, in the global healthcare system. The advancement of non-invasive or minimally invasive therapies, more precise diagnostics employing artificial intelligence, and telemedicine breakthroughs are paving the way for better infrastructure with composite solutions for diverse conditions at an accessible price. However, due to a lack of regulatory standards in particular developing countries and other policies that prohibit the use of liquid biopsy in hospitals, liquid biopsy remains minimal. As a result, only a few hospitals and research institutions utilize liquid biopsy, which is expected to hamper the market growth during the forecast period.

Regionally, the global market is segmented into five major regions, which include North America, Asia Pacific, Europe, Latin America, and Middle East & Africa. Among the markets in these regions, the North American liquid biopsy market is estimated to hold the leading market share of 36.19% and attain a revenue of USD 9363.1 Million by the end of 2028. The market in the region is further expected to grow at a CAGR of 29.7% during the forecast period. On the other hand, the Europe liquid biopsy market is projected to hold second leading stance by garnering a revenue of USD 1228.8 Million in 2021. The growth of the market in the region can be attributed to the rising healthcare expenditure in the major countries of Europe, such as Germany, UK, Spain, and Russia.

Furthermore, in the North American region, the United States is projected to generate significant growth opportunities for market growth by attaining a revenue of 1284.3 USD Million in 2021, while Canada is projected to reap 154.4 USD Million in revenue during the same year. The North American market presently captures the larger share due to the region's robust healthcare infrastructure. Additionally, the growing prevalence of cancer in the region is also expected to generate massive demand for liquid biopsy over the forecast period. Moreover, the increasing initiatives by the U.S. government to upgrade the facilities in cancer care is also expected to favor the market's growth in the coming years. Furthermore, improved research infrastructure and increasing investments in R&D in the healthcare industry alongside the initiatives taken by the U.S. government are some of the other factors expected to contribute to the growth of the market. Over the years, government spending on healthcare resources has significantly increased the regulatory landscape, which is also a prominent factor driving the market's growth. 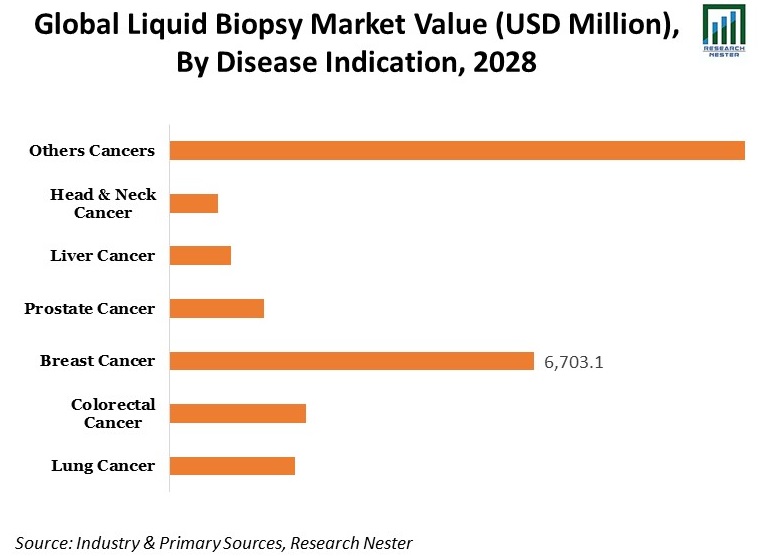 What are the major factors driving the growth of the liquid biopsy market?

Increasing prevalence of cancer and the growing need for early detection and diagnosis of the disease, are some of the major factors driving the market growth.

What would be the CAGR of liquid biopsy market over the forecast period?

What are the challenges affecting the liquid biopsy market growth?

The low specificity and sensitivity of liquid biopsy for the detection of cancer biomarkers is one of the major factors estimated to act as barriers to the growth of the market.

Which region will provide more business opportunities for growth of liquid biopsy market in future?

Asia Pacific is estimated to create notable growth opportunities for market growth over the forecast period.

Who are the major players dominating the liquid biopsy market?

What are the segments in the liquid biopsy market?

Which segment captures the largest market size in disease indication segment in the liquid biopsy market?

The breast cancer segment is anticipated to hold largest market size in value and is estimated to display significant growth opportunities.