Liquefied Petroleum Gas, also known as autogas or propane is flammable mixture of hydrocarbon gases such as propane, butane and combination of these gases. Autogas is lower carbon, clean and effective source of energy. Pressurized cylindrical containers are used for the transportation and storage of LPG. Autogas is used for wide variety of applications such as cooking, agriculture, hospitality, construction, sailing among numerous others. It is used worldwide due to its cost effectiveness, convenience and economic reasons.

However, being a form of gas, it does not pollute ground or water sources as it is utilized without ash. It is used as an alternative fuel in Light Motor Vehicles (LMV’s) and transportation vehicles as it reduces the carbon emissions in vehicles as well as stationary applications such as cooking gas and generators.

The usage of LPG in residential & commercial sectors has attributed to replacement of conventional natural resources such as coal, wood etc.

Rising awareness of estimated scarcity of natural resources, easy availability alongside budget is likely to foster the growth of liquefied petroleum gas market in near future.

Market of Liquefied Petroleum Gas has generated market size of 328 million tons in the recent past. Booming initiatives by government to encourage LPG applications with respect to its extensive benefits in commercial and residential sectors has estimated the market growth over the forecast period.CLICK TO DOWNLOAD FREE SAMPLE

Geographically, the countries such as China and India has highest consumption of LGP making Asia Pacific to be the largest region in terms of utilization accounting for 42% of the overall market by 2027. North America has led the liquefied petroleum gas to emerge as a significant market for LPG production. Production of LPG in the United States, making it the leading manufacturer and exporter of LPG is expected to fuel the market growth over the forecast period. The market size of LPG vehicle market was 293 million tons in 2017. Key sponsoring countries such as Germany and Italy are anticipated to fuel the liquid petroleum gas market of Europe in the forecast period.

According to a recent study conducted by Research Nester, the global market for Liquefied Petroleum Gas is expected to grow at a CAGR of 4.2% during the forecast period 2018-2027. Worldwide expansion of liquefied petroleum gas market is anticipated to generate USD 283.64 Billion in revenue by the end of 2027.

Based on application type, liquefied petroleum gas is segmented into residential, commercial, chemical, industrial, autogas, refinery among others. 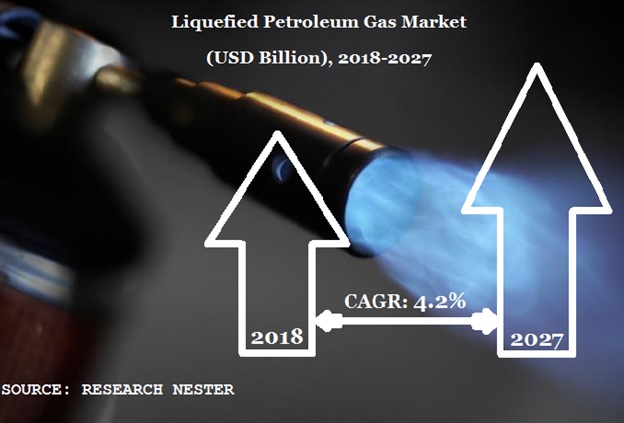 The liquefied petroleum gas market is further classified on the basis of region as follows:

Factors such as cost effectiveness, fuel efficiency and emission control are most likely to drive the LPG Market during forecast period. Initiatives by government in spreading awareness to general population regarding benefits and advancements in LPG for improving energy efficiency and economy is expected to elevate the demand for liquefied petroleum gas  over the forecast period.

Moreover, the procurement and expansion of merchandizing and allotment of outlets are estimated to intensify the competition for delivering the best services in the liquefied petroleum gas market furthering the need of branding the market and rise of new key players. This factor is anticipated to increase market share by the end of forecast period.

The overall estimate consumption of LPG in domestic segment was around 63% in 2017. The use of LPG as cooking fuel in both residential and commercial sectors especially in regions such as Middle East Africa, Asia Pacific and Latin America is one of the leading growth drivers for LPG market. The increasing use of LPG as feedstock in petrochemical refineries as well as transportation fuel in Europe is anticipated to be one of the major factors behind the growth of liquefied petroleum gas market during forecast period.

However, the higher cost of equipment installation of LPG units and production of shale gas is likely to dissuade the growth of LPG market.