Marijuana, also known as cannabis, is a mixture of dried leaves, stems, seeds and flowers of the hemp plant called ‘cannabis sativa’. Marijuana is used as a medicinal component for treating certain diseases including cancer, severe pain, HIV, and others. It is also used as a psychoactive recreational drugs mainly among the youth. The main chemical present in legal marijuana is THC (delta-9-tetrahydrocannabinol), whose highest concentrations are found in the dried flowers, or buds. When the smoke of marijuana is inhaled, THC is swiftly passed to the bloodstream from the lungs and is then carried to the brain and other organs throughout the body.

According to the World Health Organization (WHO), about 147 million people, which is almost 2.5% of the world population, consume cannabis.

Legalization of marijuana in many countries for medical and recreational use is anticipated to rapidly increase the demand for legal marijuana over the coming years. Marijuana provides several health benefits, such as it relieves severe pain, regulate and prevent diabetes, fights cancer, and helps to ease depression. According to the WHO, depression is a common mental disorder affecting around 264 million people globally. Owing to these factors, the global legal marijuana market is anticipated to attain a notable CAGR during the forecast period, i.e., 2021-2028.

The legal marijuana market is segmented by application into chronic pain, cancer, mental disorders, glaucoma and others. Among these segments, the chronic pain segment is anticipated to record the largest market share over the forecast period owing to the presence of chemical compounds, such as cannabinoids, which helps in relieving severe pain. Furthermore, the cannabinoids have the properties of altering pain perception pathways in our brain, which helps in reducing severe pain. CLICK TO DOWNLOAD SAMPLE REPORT 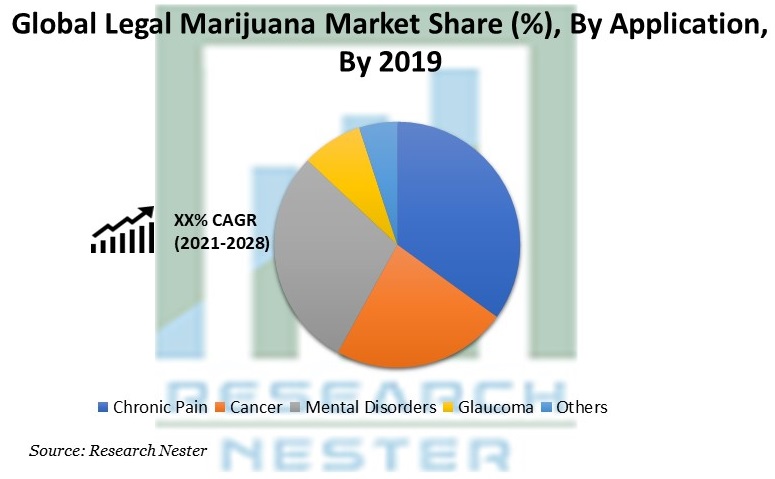 Benefits of marijuana in treating chronic conditions such as arthritis, depression, epilepsy, anxiety, cancer, AIDS, and others are anticipated to create growth opportunities for legal marijuana market over the forecast period. According to the WHO, around 20% of the children and adolescents have a mental health condition worldwide, with suicide being the second leading cause of death among people from 15- to 29-year-old. Moreover, legal marijuana, which are sold as medical marijuana, possesses medical benefits in treating glaucoma, where the additional pressure on the eyeball is painful for individuals with the disorder. Marijuana helps in reducing the pressure applied on the eyeball, thereby, providing some relief to individuals with glaucoma.

In 2018, the Food and Drug Administration (FDA) of the United States approved Epidiolex (cannabidiol) oral solution in patients for age of 2 years and above for the treatment of seizures associated with two rare and severe forms of epilepsy known as Lennox-Gastaut syndrome and Dravet syndrome. This is the first drug approved by FDA which contains a purified drug substance derived from legal marijuana.

Organizations dealing in research and development activities of legal marijuana are estimated to allocate a major portion of the budget for the research of marijuana based products. Additionally, the increasing legalization of marijuana for medical purpose in various countries including Canada, Italy, Switzerland, Portugal and others are anticipated to increase the demand for legal marijuana over the coming years.

High Cost of Legal Marijuana to Hamper the Market Growth

Legal marijuana is expensive since the demand for the product is more than its supply. Additionally, heavy tax rates are levied on legal marijuana by the government including taxes on cultivation as well as at retail, which adds on to the overall cost of the drug. On the other hand, several regions worldwide have not yet legalized marijuana owing to the numerous concerns associated with the use of these drugs. Moreover, the fear of illicit business of marijuana is further anticipated to hamper the growth of legal marijuana market over the forecast period.

Marijuana, when consumed for a long period of time, can cause health problems such as coughing, difficulty in breathing, trouble with thinking, and others. Additionally, if marijuana is consumed in excessive amount, can cause paranoia, hallucinations, increased heartbeat, and anxiety, which is anticipated to hamper the growth of legal marijuana market over the forecast period.

Impact of COVID-19 on the Global Legal Marijuana Market

Owing to the COVID-19 pandemic, individuals worldwide had to encounter acute symptoms of stress and anxiety, added up by loss of jobs and uncertainty of life in the future. As a result, to overcome the situation, many people started consuming drugs, which had further led to the growth in the trade of illegal drugs. Although, in nations where marijuana is legalized, due to the restrictions adopted by the government of nations, the supply chain of these drugs had been hampered majorly as these drugs were not categorized under essential goods. On the other hand, the demand for medical marijuana increased significantly, backed by the need for pain relief drugs in hospitals and other medical clinics.

Our in-depth analysis of the legal marijuana market includes the following segments:

The market in North America is anticipated to hold the largest market share over the forecast period on the back of increasing legalization of marijuana in countries including the United States and Canada for usage in pharmaceutical sector. Moreover, the increasing research and development activities in the region are anticipated to increase the demand for legal marijuana over the forecast period.

The global legal marijuana market is further classified on the basis of regions as follows: