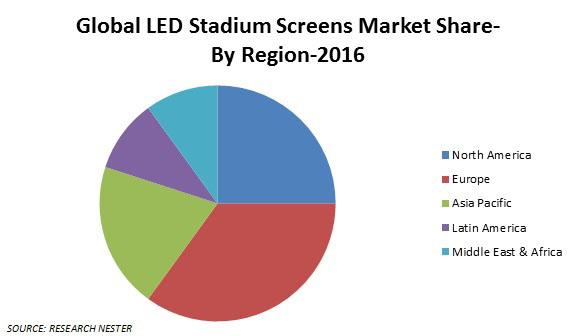 Global LED stadium screens market is further classified on the basis of region as follows:

Expansion of stadiums in the terms of size and population capacity is springing the installation of LED screens in stadiums. Increasing live events and concerts in stadiums have attracted the consumers towards it which further propels the growth of LED stadium screens market. Apart from this, many government initiatives for the promotion of LED products are driving the growth of LED stadium screens market.

Use of LED stadium screens for advertisement purpose is also anticipated to push stadiums to install LED screens. Technical advancement with LED stadium screens such as ability to connect all screens together via ground network and better resolutions of the screens are some major drivers which are expected to foster the demand for LED stadium screen in near future.