Laminated Bus-Bar is a confined unified structure composed from layers of fabricated copper differentiated from thin dielectric materials. They are arranged uniformly and connected with insulated-gate bipolar transistor’s (IGBT) and support capacitors. Laminated Bus-Bar is used in electric and electronic products to generate power in battery system. Copper fabricated layers are aligned parallely with connecting electrodes and cathodes at positive and negative terminals. Peak reverse voltage is reduced at both ends of power terminals by low distribution of inductance amongst the circuit, which helps to avoid voltage and shock problems. Laminated Bus-Bar in batteries improves reliability and stability in circuit integration to repair and easily maintain the circuit panel.

Laminated Bus-Bar is self-customized by the manufacturers to design and draw according to the requirements in batteries. Bus-Bar are basically fiber optic laser machine and water jet cutting machine improve the efficiency of batteries. Laminated Bus-Bar is used in various industries such as transport, aerospace, military and defense sectors. It can also be used at various household electrical appliances. Laminated Bus-Bar after aligning with capacitor decreases the emission of co2 gases and helps to avoid global house warming effects. The advantages of laminated Bus-Bar include impedance, reduction in voltages, structural optimal reliability and overload voltage reflectance.

Asia Pacific is expected to hold largest share in terms of revenue in Global Laminated Bus-Bar Market till forecast period 2018-2027. Increase in support from government on renewable source of energy responsible for low emission of greenhouse gases is exhibiting significant growth in the market. Additionally, increased advantages over technical challenges faced at conventional battery system is expected to support the significant growth rate in market.

Moreover, regions with relatively low market share such as Middle East and Latin America is anticipated to exhibit growth in the market backed by increase demand of batteries and switches for electrical purposes. Additionally, copper propels a positive impact of laminated Bus-Bars on global warming which in turn is expected to support the growth of laminated Bus-Bar market in the forecast period. CLICK TO DOWNLOAD FREE SAMPLE REPORT 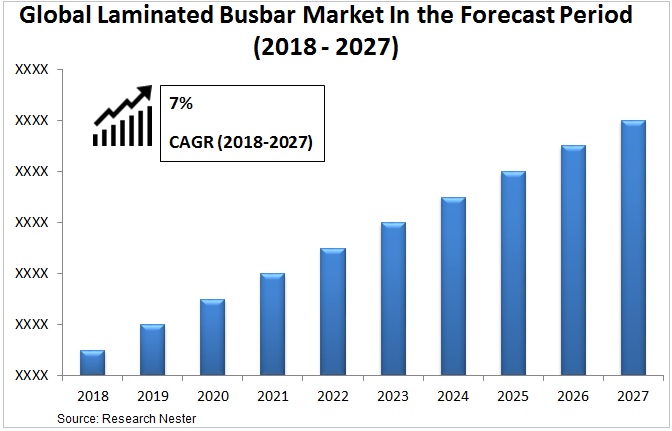 Asia Pacific is expected to be predominant region in global Laminated Bus-Bar Market. Increasing demands from automotive and military sectors for electric appliances is boosting growth in the Asia Pacific Market.

Global Laminated Bus-Bar Markets further classified on the basis of region as follows: 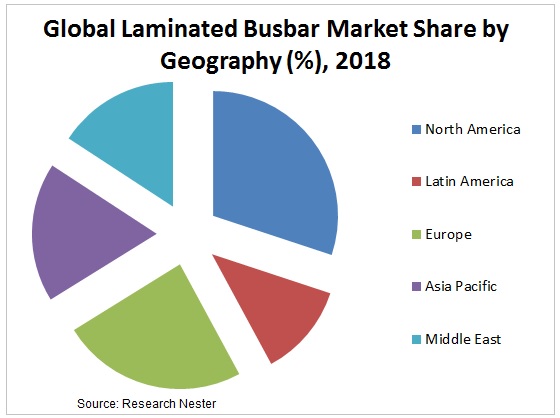 Government’s regulation on environmental effect by co2 gas emission from fossil fuel burning demands for sustainable energy system. Additionally, low emission from laminated Bus-Bar based batteries used in various household applications is driving the growth of market in future. According to “International Energy Agency”, renewables energy system is led by solar PV and by wind, hydropower and bioenergy over 70% of global electricity generation. Hydropower is largest renewable source with 16% in wind, 6% in solar PV and 3% in bioenergy.

Reduction in technical challenges such as low impedance, reduced voltage, and structural optimal reliability and overload capacities faced by the customers is adding up the reason for restraining the growth of market over the forecast period of 2018-2027.

Increased use of batteries and energy from various sectors such as telecommunication, aerospace, transportation industry is driving the growth of market in expected forecast period (2018-2027).

Shifting trend of vehicles from old conventional based automotive vehicles to electric vehicles demands for electric circuit system, which drives the growth of laminated Bus-Bar market.

One of the challenging factor that hampers the growth of laminated bus-bar market is quality of electric wire and plates installed at capacitor that may cause technical issues such as, heat loss and transmission loss.