Intelligent Process Automation is a process by which Artificial Intelligence and many new technologies are being used such as Cognitive Automation, Machine Learning, including other technologies for carrying out various tasks rapidly and accurately. The merging of these technologies is certainly driving the automation capabilities, which would enhance the value of business and deliver a competitive advantage for their customers. Intelligent Process Automation is primarily used for the purpose of assisting individuals in their tasks such as labour work that involves routine and repetition.

The global intelligent process automation market is estimated to register a CAGR of 13.57% over the forecast period, i.e., 2018-2027. This growth is on account of factors being reduction in costs of operations by businesses, apart from helping improve the productivity of the workforce.

The global intelligent process automation market that was valued at USD 9485.64 million as of 2018 is projected to reach USD 29,631.88 million by 2027. The global intelligent process automation market is segmented on the basis of region that comprises of North America, Europe, Asia Pacific, Latin America and Middle East and Africa. The market in North America is anticipated to register the highest market share of 39.18% by 2027 and is closely followed by the market in Europe, which is anticipated to garner a market share of 26.94% by the end of forecast period. The market in North America that holds the highest market share is anticipated to grow on the back of a number of solutions related to automation and process control being adopted in the region. Apart from this, there is a significant rise in adoption of robotic process automation in various organizations, including recent technologies such as Artificial Intelligence, Natural Language Processing and Machine Learning, all of which are anticipated to drive the growth of the market over the forecast period. On the other hand, the market in Europe is predicted to achieve notable growth over the forecast period, owing to factors such as growing adoption of recent technologies such as artificial intelligence and natural language processing and more companies operating in the banking sector set to adopt intelligent process automation solutions.

On the basis of component, the global intelligent process automation market is segmented into software and services. Software falling under component segment that held a market share of 68.88% in the year 2018 and is anticipated to register the highest market share over the forecast period. 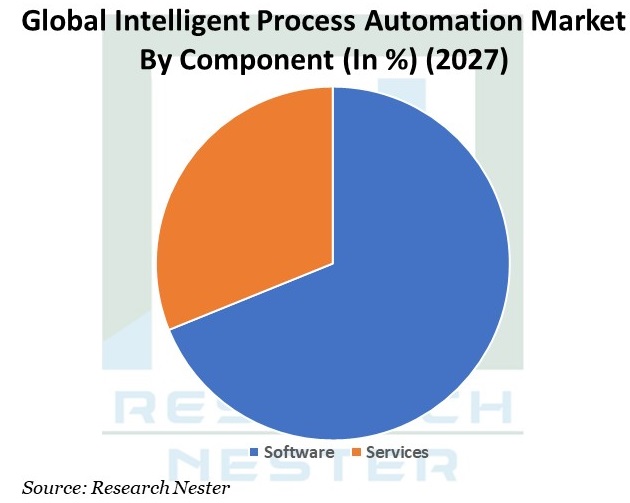 The market is segmented by technology into natural language processing, machine and deep learning, virtual agents, mini bots and Robotic Process Automation (RPA) and computer vision. Mini Bots and Robotic Process Automation (RPA) is projected to record the highest market share of 37.55% over the forecast period, owing to factors such as the reduction in performance of tasks repeatedly which can involve records being checked regularly or in the case where data has to be copied which can be avoided, as it helps save on time. CLICK TO DOWNLOAD SAMPLE REPORT 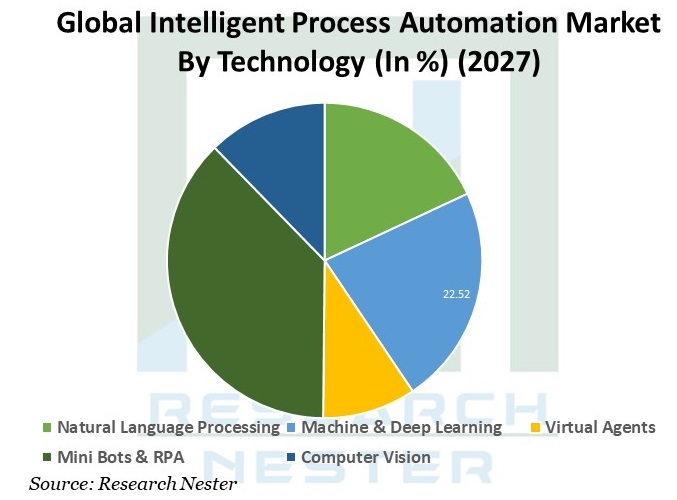 The market is segmented by application into IT operations, Business Process Automation, Application Management, Content Management, Security and Others. Business Process Automation segment is anticipated to occupy the highest CAGR growth over the forecast period, owing to better allocation of work for the employees and other workers which can reduce human involvement for many tasks that are repetitive in nature. Moreover, the number of human errors taking place can also be minimized, thereby helping improve efficiency at workplace.

The market is segmented by vertical into Banking & Financial Services, Telecom & IT, Retail & E-Commerce, Manufacturing, Healthcare & Life Sciences and Others. The BFSI segment is projected to grow at the highest rate over the forecast period, owing to its ability to help the business focus on innovative methods for improving their growth, instead of spending more time on tasks that are considered to be monotonous. Moreover, the sector would be able to achieve cost effectiveness, that can help banks and financial institutions considerable time and money towards processing.

The growing number of robots being acquired and installed across various important industries is projected to contribute to the growth of the market in the next few years. According to U.S. Robotic Industries Association, there was a 48 percent increase in robot shipments for the consumer goods and food companies in the year 2018. Various factors such as the accuracy levels of a robot being sharp that can help produce products at a mass scale, in addition to delivering high quality products. Some of the tasks can be performed by industrial robots on assembly lines that tend to be monotonous and labour-oriented in an effective manner.

The growing demand for bringing in automation by choosing systems that can perform functions on their own has gained attention, with internet having evolved over the years as well as digitization that has been introduced in almost all parts of the world. There is tremendous potential for bringing in automation in finance and accounting with the help of Robotic Process Automation (RPA), which is anticipated to increase the deployment of RPA in the Banking and Financial Services sector. Financial institutions would be able to improve their efficiency and accuracy by going in for automation of their manual processes. In addition to the same, virtual assistants may be brought in to the workplace that can operate all days in a week by being available for twenty-four hours every day, which can enhance the productivity levels in an organization.

Some of the limitations present in intelligent process automation market are the high costs of installation that are involved, such as the usage of robotics in the various industrial processes would generate huge capital costs, due to the large investments required to be made initially to get them started. Moreover, other related costs for the purposes of installation, configuration and for undergoing automation are to be considered before making such investments. Apart from this limitation, there are other problems that could affect the market such as low budget levels prevailing in the case of small and medium industries for the purpose of usage on cyber security who are earmarking less than ten percent of total IT budget towards cyber security and the high costs associated with ensuring the safety of robots from any form of cyber threats. Lastly, the presence of a limited functionality, where a computer system that has been running on intelligent process automation is mainly devized to perform only a specified task which raises the demand for manual labour that increases the costs for the company. Moreover, with automation processes becoming complicated and resulting in failure many times, which is due to a faulty environment that is existent which includes the system and the user, apart from other elements involved.