Extensive insights into the Growth of Indium Market amidst COVID-19

Indium (In) is a chemical element with multiple physical and chemical properties whose atomic number is ‘49’. Words ‘Indium’ has come in sense from Latin word ‘Indicium’, which means violet or indigo. Further, due to indium’s electrolytic properties, it is highly used in plating applications in various industries. Indium is a soft, ductile and element which is majorly being used for coating of products such as automobile bearings and other electronic components. In order to improve moisture resistance and antiseizure properties of automobiles bearings indium is used as protective plate for automobile bearings. Moreover, indium can also be used to make corrosion-resistant mirror surface which has as good quality as silver. However, indium is not widely scattered in environment but all indium compounds could be highly toxic which can damage heart, kidney and lung. Additionally, indium is highly adopted in semiconductor industries as doping agent to form p-type germanium.  Indium is used to make electronic components such as transistors, diode and rectifiers. 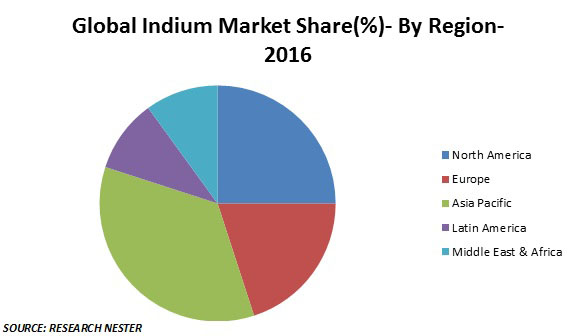 In terms of region, global indium market is segmented into five major regions which are North America, Europe, Asia Pacific, Latin America and Middle East & Africa region. Among these regions, Asia Pacific region dominated the global indium market and is expected to be the fastest growing market for indium during forecast period. This growth in Asia Pacific region can be attributed to factors such as rising demand for indium containing end products and other electronics items in this region. Moreover, growing population, increasing disposable incomes and changing living standards are expected to be the major factors behind growing production of indium containing end products in this region. Over the past decade, China has been the leading producer and exporters of indium products and is expected to be the key contributor to the growth of indium market in this region.

In terms of volume, North America region is anticipated to be second leading market for indium products during the forecast period due to existence of large number of manufactures of semiconductors, indium tin oxide and solders and alloys in this region. Moreover, United States is expected to be the key country which is likely to drive the growth of indium market in North America region.CLICK TO DOWNLOAD FREE SAMPLE

Apart from this, Europe region is also anticipated to witness a satisfactory growth over the forecast period owing to presence of indium refiners in countries such as Germany and Belgium in this region.

Global indium market is further classified on the basis of region as follows:

Global indium market is primarily driven by growing use of indium in plating applications (a thin coating of materials) in industries including automobile and electronics. Rising demand for indium in different industries in order to improve moisture resistance and anti-seize properties are key factors which are likely to driver the growth of global indium market in near future.

Apart from this, rising population, increasing disposable income & purchasing power of the consumers and changing life style of population are major reasons which have fueled the demand for indium coated end products across the globe. These factors are some of the vital consideration for the growth of global indium market.

However, presence of alternatives of indium such as poly (3,4- ethylenedioxythiophene) for application in touch screens and flexible displays are expected to be the major challenge which may dampen the growth of global indium market in near future.

The global indium market is segmented as follows: