On July 26, 2019, Vitrolife announced that it has collaborated with Prime Tech to develop as well as exclusively market the Piezo technique for improvement of Intracytoplasmic Sperm Injection (ICSI) procedure in human IVF treatment. The inclusion of Piezo technique in IVF would standardize and simplify the procedure.

Introduction to In Vitro Fertilization

In vitro fertilization or IVF is a form of assisted reproductive technology (ART) where the eggs are harvested from a woman’s ovaries and then fertilized outside the body in an artificial setting, usually a lab. The oocytes or the eggs are either freshly retrieved or can be frozen and stored for future use. Once the eggs are fertilized, they are implanted into the uterus of the woman. This type of treatment is used in order to solve problems related to infertility among both men and women.

The demand for in vitro fertilization has spiked in the last few years and is predicted to continue to rise as the number of IVF procedures are increasing globally. The in vitro fertilization market is anticipated to record a CAGR of around 10.3% over the forecast period, i.e., 2019-2027. The market is segmented by product, by end user and by region, out of which, the product segment is further divided into culture media, incubators, cryosystem, IVF cabinets and others. The culture media segment is anticipated to hold a significant share in the in vitro fertilization market on account of high government funding for the development of improved culture media. Moreover, the growth of this segment can be attributed to the rising research and development activities by both government and private research institutes. 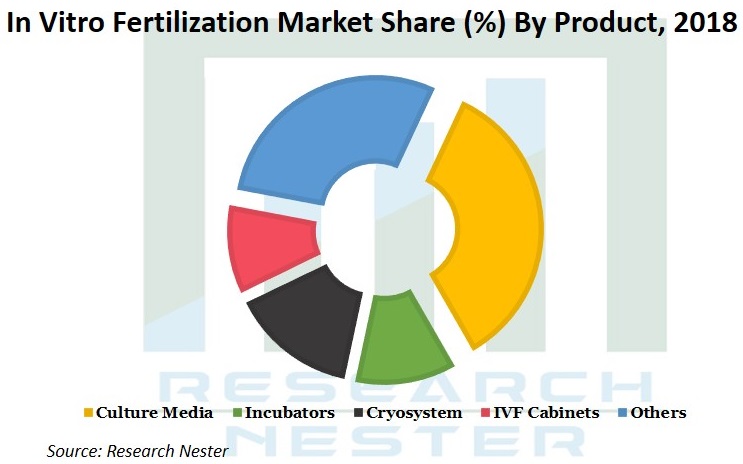 On the basis of end user, the market is segmented into hospitals, fertility clinics and others, out of which the fertility clinics segment is estimated to observe the highest growth over the forecast period. This can be attributed to the growing number of fertility clinics in various regions. As per the statistics collected by the Human Fertilisation and Embryology Authority, more than 1,100,000 IVF treatment cycles have taken place in UK licensed clinics between 1991 and 2016. The number of IVF treatment cycles is anticipated to further rise in the upcoming years.CLICK TO DOWNLOAD SAMPLE REPORT 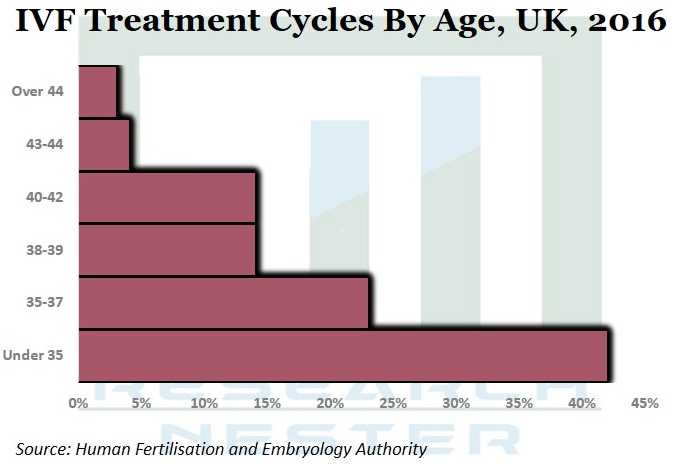 Increase in Infertility Rate to Propel the Market Growth

The rising awareness about various infertility treatments is resulting in a growing demand for in vitro fertilization treatment among people with infertility issues. This is predicted to significantly raise the market growth in the upcoming years. The growing cases of Polycystic Ovary Syndrome or PCOS is another key factor which leads to infertility among women and thus increases the requirement for IVF treatment procedures. According to the Centers for Disease Control and Prevention, PCOS affects around 6% to 12% of women, i.e., about 5 million women in the United States every year.

The growing number of fertility clinics is another major factor estimated to boost the market growth. According to the Fertility Clinic Success Rates Report released by CDC, around 284,385 Assisted Reproductive Technology (ART) cycles were performed at 448 reporting fertility clinics in the United States in 2017. These treatments resulted in 68,908 live births in the country, which led to the birth of 78,052 live born infants. Further, the report stated that the number of infants born in the United States using ART comprise of approximately 1.7% of all infants born in the region every year. The growing demand for these treatments is predicted to lead to an increased number of fertility clinics, thereby giving rise to the market growth.

High Cost of IVF Procedure to Hamper the Market Growth

The in vitro fertilization treatment is a highly expensive procedure which restricts a large number of potential customer base from receiving the treatment. This is the major factor estimated to hinder the market growth. Additionally, the complications associated with IVF treatment, for instance, the risk of multiple births, are anticipated to limit the growth of this market further in the upcoming years.

Our in-depth analysis of the in vitro fertilization market includes the following segments:

On the basis of regional analysis, the in vitro fertilization market is segmented into five major regions including North America, Europe, Asia Pacific, Latin America and Middle East & Africa region.

The market for in vitro fertilization is anticipated to witness highest growth in Europe. The market in this region held the largest share in in vitro fertilization market in the year 2018. The considerable growth is on account of a larger demand for IVF procedures in the region along with advancements in technology which leads to the development of better techniques for IVF. Moreover, the Human Fertilisation and Embryology Authority estimated that in 2016, about 41% of IVF treatments that took place in UK were funded by the NHS. This funding has resulted in 65,730 births since 2008, with 8,507 births in the year 2016. The market in Asia Pacific is projected to grow at the highest rate over the forecast period as a result of growing awareness among people about the availability and convenience of assisted reproductive technology cycles. Further, the growing expenditure on healthcare and rising population of Asian countries, mainly China and India, are other factors estimated to increase the market growth in this region.

The in vitro fertilization market is further classified on the basis of region as follows: