The in-flight advertising market is estimated to grow with a moderate CAGR during the forecast period, i.e., 2021-2029. The growing number of passengers boarding flights and an increase in imports and exports of goods are the factors which are expected to fuel this market's progress. The growth of the market can also be attributed to factors such as increase in low cost carriers, the growth of global middle class, and the growth in airport infrastructure spending. However, the market has seen a drastic dip due to COVID-19 but soon the market trend will see a boon with people acclimatizing to the new normal. According to The Director General of Civil Aviation (DGCA), between 2016 and 2019, the domestic air passenger traffic in the first seven months (January to July) increased by 47%, from over 5.6 crore passengers in 2016 to 8.25 crores in 2019. Individualized computing and smartphones have empowered advertising agencies to display a particular product’s ad to a particular group of people depending on age, gender, and class. The creative inflight advertising gradually adds interaction to the sound, sight, and motion, and enhanced interaction is increasing the brand effectiveness. 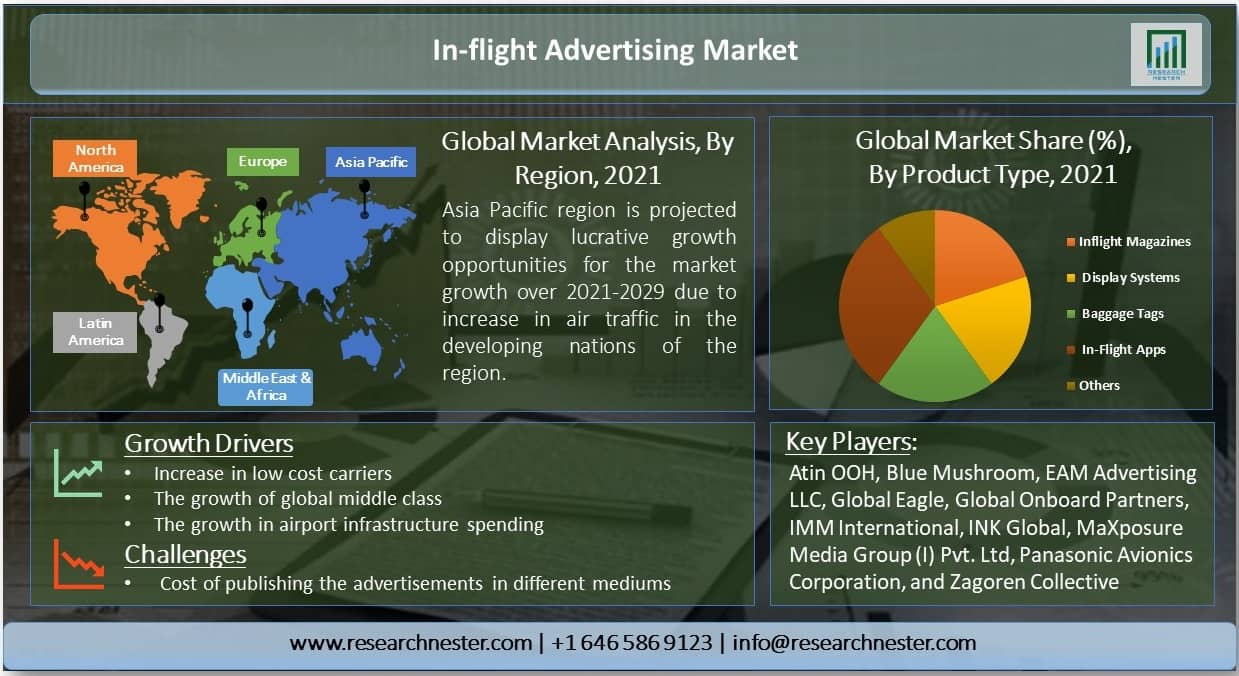 Inflight advertising market is segmented by product type into display systems, inflight magazines, baggage tags, in-flight apps, and others. Various entertainment options are provided by the media companies, such as news, sports, short videos, and movies on a big screen or individual screen. Therefore, advertisers choose to display their advertisements based on travel class, screen, and advertisement type. In recent times, the in-flight advertisements are personalized based on the airline destinations and the regional language to promote restaurants, hotels, and local businesses. Several airlines provide Wi-Fi and free internet for passengers, which are anticipated to emerge as a good opportunity for in-flight advertising companies shortly. Based on aircraft type, market is segmented into passenger flights and business flights. Inflight advertising on passenger flight shows higher growth as it can accumulate larger amount people at once whereas on the other hand business flights are used to transport small groups of people. CLICK TO DOWNLOAD SAMPLE REPORT

On the basis of region, the market is segmented into North America, Europe, Asia Pacific, Latin America, and the Middle East & Africa, out of which it was seen that North America market dominated the market for inflight advertising in the year 2019. Its primary reason be the massive involvement of inflight entertainment systems in the airlines. Besides, it is expected that during the forecasted period the Asia Pacific region would grow at the highest rate. The main reason for the market growth in this region is the rise in passenger traffic. It is expected that by 2035, about more than 16,000 aircraft would be delivered in the area, which is expected to impact the in-flight advertising market in the Asia-Pacific region positively. Correspondingly, the Middle East & Africa region has been witnessing an impressive increase in its economy of late. The major factors driving the economy of the region is increased air travel and rising tourism. Dubai welcomed a record 16.73 million tourists in 2019, an improvement over the previous two years. As the area is located at the crossroads of Asia-Africa and Europe, their local airlines, led by Emirates, Qatar Airways, and Etihad Airlines, are well-positioned to compete for the air traffic, globally. Due to the rapid increase in the number of aircraft in the region, it is expected that there would be a substantial and simultaneous impact on the market.

The global inflight advertising market is further classified on the basis of region as follows:

Our in-depth analysis of the global inflight advertising market includes the following segments: