Immunotherapy is referred to the treatment of disease by suppressing or activating the immune system of the human body. Also known as biological therapy, the subject has become of great interest amongst the pharmaceutical companies, clinicians, and researchers in the recent years owing to the increasing success rate of the therapy to treat different types of cancer diseases. Immunotherapy restores or improves immunity system to restrict growth of cancer cells, preventing it to spread to other parts of the body and also enables the immunity system to destroy the cancer cells from the body.

The global immunotherapy drugs market is thriving on account of the growing need for the cure and treatment of chronic and targeted diseases globally, along with the increasing favorable initiatives of the government of nations to enhance research and development in the field of various targeted diseases, and the growing investments of the pharmaceutical companies for the development of advanced oncology biosimilars and other immunotherapy drugs. For instance, on the 12th of January, 2016, the then President of the United States, Barack Obama, tasked the then Vice President, Joe Biden, to lead a research initiative called the “Cancer Moonshot” which aimed to deploy a large team of oncologists, researchers and other healthcare workers to progress toward a cure for cancer prevention, diagnosis, and treatment, and further to help end cancer. Until 2020, the National Cancer Institute (NCI) of the National Institute of Health (NIH), U.S. Department of Health and Human Sciences, invested over USD 1 billion in funding to support more than 240 research projects across around 70 cancer science initiatives. The initiatives that had been established to address the goals of the project is mentioned below: 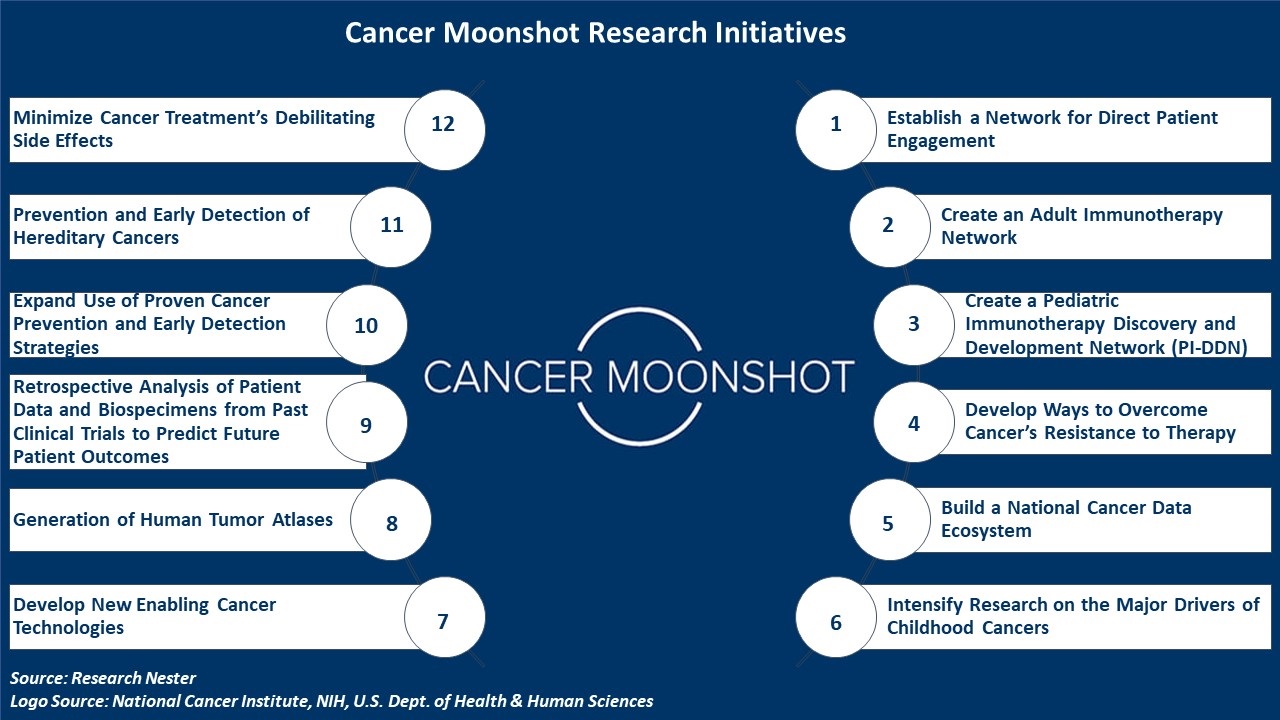 The global immunotherapy drugs market is segmented by therapy area into cancer, infectious diseases, inflammatory & autoimmune diseases, and others. Among these segments, the cancer segment is anticipated to register the largest market share by the end of 2021. The growth of the segment can be attributed to the growing prevalence of cancer diseases globally, and the increasing need for prevention and cure of such chronic diseases, backed by the rising burden and the risks associated with the disease. According to the statistics by the World Health Organization (WHO), in the year 2018, around 9.6 million deaths was caused due to cancer, a disease which is also the second leading cause of death around the world. Moreover, increasing research and advancements in immune-oncology, along with the growing research for immunotherapy cure for stage-4 cancer, are some of the additional factors anticipated to drive the growth of the segment during the forecast period. 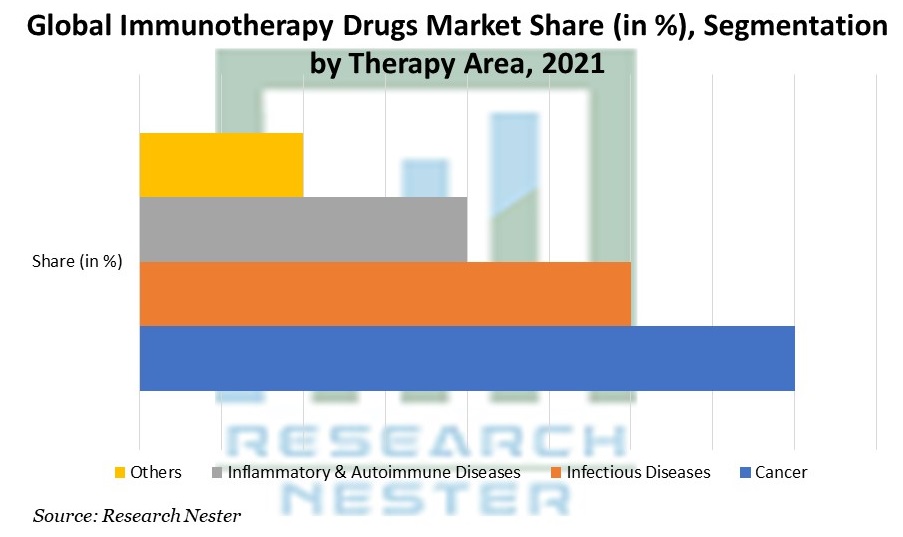 Targeted therapy is referred to the process of treating cancer by using drugs to target specific proteins and genes that are involved in the growth and survival of the cancer cells. The therapy is either used individually or with chemotherapy and other treatments. Over the past few years, with increasing research and advancements in drugs developed for prevention and cure of cancer diseases, the U.S. FDA has approved several targeted therapies for treating different forms of cancer. There are several types of targeted therapy that include angiogenesis inhibitors, immunotherapies, and apoptosis inducers among others, out of which, the most common ones are monoclonal antibodies type of immunotherapy and small-molecule drugs, such as angiogenesis inhibitors. Backed by the growing prevalence of cancer diseases globally, and the advancements in research, healthcare practitioners are increasingly adopting targeted therapies for treating cancer, which is anticipated to drive the market growth in the coming years.

The treatment of cancer using immunotherapy drugs is significantly high and is not affordable by several low- and middle-income groups. Moreover, lack of proper healthcare infrastructure in several nations around the globe is also anticipated to hamper the adoption of immunotherapy drugs, and in turn lower the market growth during the forecast period.

Our in-depth analysis of the global immunotherapy drugs market includes the following segments:

On the basis of regional analysis, the global immunotherapy drugs market is segmented into five major regions including North America, Europe, Asia Pacific, Latin America, and the Middle East & Africa regions. The market for immunotherapy drugs in North America is estimated to register the largest market share by the end of 2029 on the back of presence of several key players in nations, such as the United States, along with the growing number of new cancer cases registered every year in the nations in the region. According to the statistics by the Centers for Disease Control and Prevention (CDC), the total number of new cancers registered annually in the United States grew from 1,291.6 thousand cases in the year 1999 to 1,701.3 thousand cases in the year 2017. 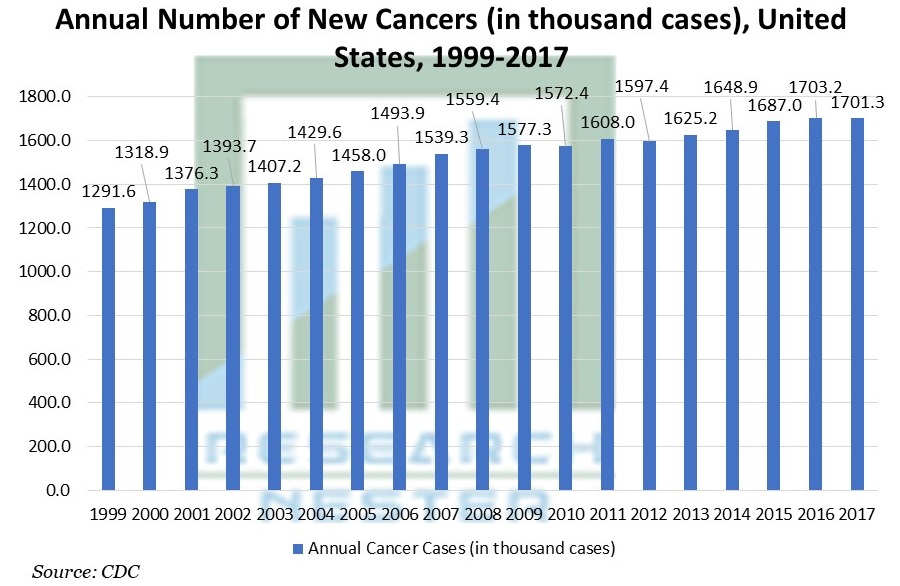 The global immunotherapy drugs market is further classified on the basis of region as follows:

What are the major factors driving the growth of the immunotherapy drug market?

Increasing prevalence of cancer cases globally, and the rising adoption of targeted therapies for treating cancer, are some of the major factors driving the market growth.

What would be the CAGR of immunotherapy drug market over the forecast period?

What are the challenges affecting the immunotherapy drug market growth?

High cost of immunotherapy treatment is one of the major factors estimated to act as barriers to the growth of the market.

Who are the major players dominating the immunotherapy drug market?

Which region is anticipated to hold the dominating share in the immunotherapy drugs market?

The market in North America is projected to hold the dominating share by the end of 2029 owing to the presence of several key players in the region, along with the increasing prevalence of cancer cases in the region.

What are the segments in the immunotherapy drugs market?

The immunotherapy drugs market is segmented by type, therapy area, and by region.