Immuno oncology is a specialized type of immunotherapy which is used to treat cancer by using body’s own immune system. It uses immune cells to fight back cancer without destroying normal healthy cells. The main goal is to provide long term survival of patients. The immune cells of the body are constantly monitoring, assessing and eradicating faulty unhealthy cells. There are times when these faulty cells escape this process and result in cancer. By providing accurate tools to our immune system, the cancerous tumours can be unmasked.

Research in the field of immuno oncology has given appropriate evidences that cancerous tumours are identified by the immune cells and the development of these cancerous tumours can be stopped with the help of immuno-surveillance which can be defined as the process of recognition of various types of pathogens like viruses, bacteria, cancerous and precancerous cells or tissues in the body.

The market is witnessing high growth as immuno oncology is safer than other conventional cancer treatment methods like chemotherapy and radiotherapy. Immuno oncology has low toxicity and it is convenient for the cancer patients to undergo this treatment. This therapy has shown impressive results in the clinical trials. It is extensively used to cure melanoma. Moreover, increased prevalence of cancer worldwide is estimated to augment the growth of the market. CLICK TO DOWNLOAD SAMPLE REPORT 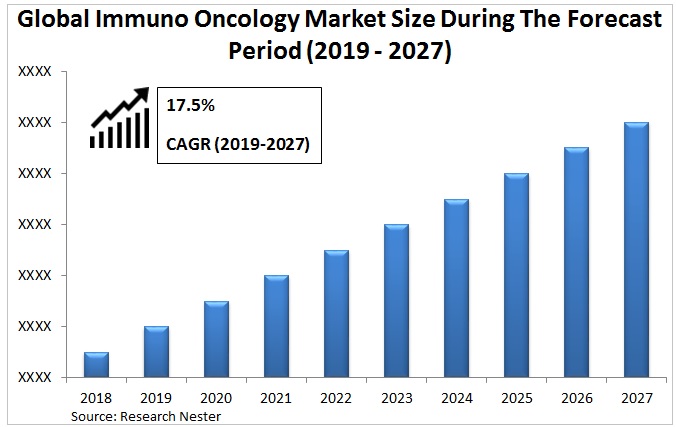 The global immuno oncology market is anticipated to grow with a CAGR of 17.5% over the forecast period i.e. 2018-2027 The market is segmented on the basis of treatment into monoclonal antibodies (Mab), therapeutic vaccines, checkpoint inhibitors and cytokines. The checkpoint inhibitor therapy is the most popular therapy which are used for the treatment of different types of carcinogenic disorders. They help the body to fight with proteins which are used by various cancerous tumours for the suppression of immune response.

Increment in Number of Cancer Patients

According to WHO, cancer burden worldwide has increased to 18.1 million new cases and the number of death due to cancer is 9.6 million in the year 2018. This increment in the number of cancer worldwide in different regions is backing an increase in the global immuno oncology therapy market. Prevalence of various types of cancer such as prostrate, skin, breast, bronchus, lung etc. is rising across various regions of the world, which in turn is estimated to boost the utilization of immuno oncology therapy by oncologists. Countries such as Australia, U.S., Canada and Germany among European countries have high penetration of cancer in terms of the overall population.

The increased prevalence of cancer across the globe have enhanced governments per capita health care expenditure. More amount of money is being invested in research and development in the field of cancer. Many international and domestic policies made by the governments of several countries which includes India, Germany, U.S., U.K. and several other nations have enhanced the healthcare support to citizens which is further expected to augment the growth of the global immuno oncology market. Higher investment in different types of global healthcare programs financed by organisations and various governments which includes Global Health Protection Program by the German government followed by the National Cancer Control Programs by the World Health Organisation showcases increased investment is estimated to support the growth of the market. 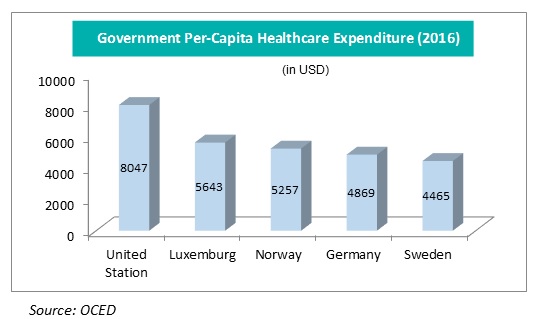 Immuno oncology therapy is very expensive as compared to conventional chemotherapy and radiotherapy. The average cost of immuno oncology therapy in the United States is approximately USD 100,000 which is very high for some cancer patients who are not financially strong whereas the average cost of initial treatment of chemotherapy is approximately USD 7000. These factors are anticipated to limit the market growth over the forecast period.

On the back of increased awareness and presence of major key players in the region, North America is anticipated to lead the market. Further, Asia- Pacific region is expected to show a significant growth in immune oncology market which can be attributed to increasing number of diseases coupled with high mortality rate, which is further increasing the demand for immune oncology.

The global immuno oncology market is further classified on the basis of region as follows: