Hydroxychloroquine sulfate, also known as hydroxychloroquine, is an antimalarial medication certified and approved for pharmaceutical use in the United States for the treatment and prevention of certain types of diseases such as malaria, systemic lupus erythematosus, and rheumatoid arthritis. The drug is sold under the name Plaquenil and is taken orally. The most common side effects of this medication include headache, vomiting, changes in eyesight, weakness in muscles, and serious allergic reactions. This medicine is listed on the World Health Organization's List of Essential Medicines as it is the safest and most effective medicines required in every health system.

The market for hydroxychloroquine sulfate is projected to grow at a CAGR of 5.7% during the forecast period, i.e, 2020-2026. The market is anticipated to attain a significantly high market value of USD 1,405.7 million by the end of 2026. The drug has been used as experiment to treat some patients infected by Covid-19 and it is identified as effective drug to a certain limit to treat Covid-19.

Growth Highlights based on Region during 2020-2026

On the basis of region, the market is segmented into North America, Europe, Asia Pacific, Latin America and Middle East & Africa. Hydroxychloroquine sulphate market in Asia Pacific is anticipated to hold the leading share in the market on the back of rising research and development activities for the manufacture of this drug. Moreover, the favourable government policies in the region further promote the market growth, especially in countries such as China, India and Japan. In the Asia Pacific region, the market in China is predicted to hold the largest share in the global market by attaining a value of USD 305.0 million by 2026. The market in North America is anticipated to witness the highest share in the market with the largest market in the United States, which further is the projected to be the fastest growing market in the region at a CAGR of 6.3% during the forecast period.

On the basis of type, the market is segmented into USP standard grade, EP standard grade, pharmaceutical standards grade and others, out of which, the segment for USP standards grade is anticipated to hold the largest share in the market with a market value of around USD 496.4 million by the end of 2026. Further, this segment is projected to grow with the highest growth rate over the forecast period. USP Standards Grade segment in global hydroxychloroquine Sulfate market is expected to create an incremental opportunity of USD 155.9 million during the forecast period. 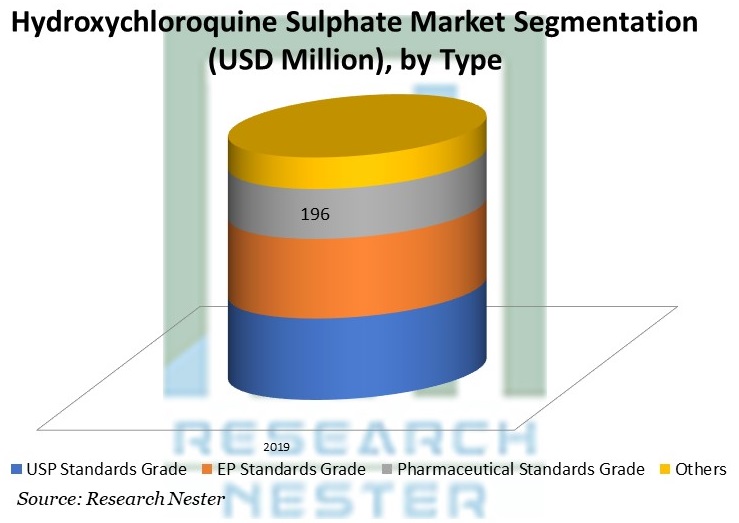 Based on the application segment, the market for hydroxychloroquine is segmented into rheumatoid joint, adolescent chronic joint, discoid & systemic lupus erythmatosus and skin lesions. Out of these, the segment for rheumatoid joint is anticipated to hold the leading share in the market on account of growing incidences of the disease all over the world. The segment for discoid & systemic lupus erythmatosus, on the other hand, is predicted to grow at the highest rate with a CAGR of 6.4% during the forecast period. This can be attributed to the increasing research and development activities in the market for finding a cure for the disorder.

According to a report by the United Nations, approximately 962 million people globally were aged above 60 years in 2017, which is expected to be double by the end of 2050. This population is highly likely to develop rheumatoid arthritis. The Centers for Disease Control and Prevention estimated this population to be around 78 million citizens in the United States alone during the same period. This elevated the need for hydroxychloroquine sulfate drug to cure the condition; thereby boosting the market growth. Moreover, the numerous ongoing research and development activities which support the use of this chemical compound for the treatment of various other diseases are further predicted to boost the overall market demand for hydroxychloroquine across the globe during the upcoming years.

1) What are the major factors driving the growth of the Hydroxychloroquine Sulphate market?

Ans: Rising elderly population globally is anticipated to drive the market growth on account of rising diseases among them along with increasing R&D activities for the medicine.

2) What would be the CAGR of Hydroxychloroquine Sulphate market over the forecast period?

4) Which region will provide more business opportunities for growth of Hydroxychloroquine Sulphate market in future?

Ans: Asia Pacific will provide more business opportunities for growth of market on account of increasing research and development activities in China, India and Japan.

5) Who are the major players dominating the Hydroxychloroquine Sulphate market?