The global hydrogenation catalyst market is estimated to garner a substantial revenue by growing at a CAGR of ~4% over the forecast period, i.e., 2022 – 2031. The growth of the market can be attributed largely to the rising demand for heterogenous catalysts from industrial and chemical application areas, and growing use of hydrogenation for manufacturing medicines and aroma chemicals. Along with these, rapid shift of energy trends towards alternative fuels, such as biodiesel and shale gas, is projected to raise the demand for hydrogenation catalysts in the upcoming years. The global biofuel production in the world reached a value of about 1.8 million barrels of oil equivalent per day in 2019, up from approximately 1.6 million barrels of oil equivalent per day in the year 2018. Furthermore, growing utilization of the product for producing a variety of commercial chemicals, such as agrochemicals, flavors, pharmaceuticals, fine chemicals, and fragrances and dietary supplements, is expected to offer lucrative opportunities to the market in the near future. 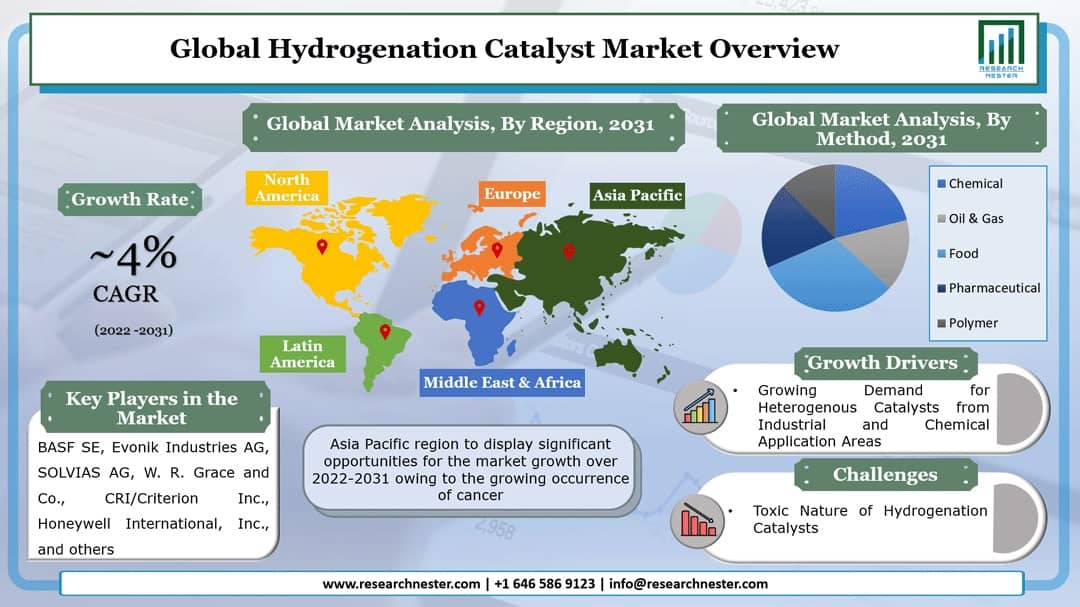 The market is segmented by end user into chemical, oil & gas, food, pharmaceutical, and polymer, out of which, the food segment is anticipated to hold the largest share in the global hydrogenation catalyst market. This can be accounted to the high usage of hydrogenation for making a large variety of manufactured goods, such as spreads and shortenings, from liquid oils. Apart from this, growing utilization of hydrogenation process to increase the chemical stability of food products is also predicted to boost the growth of the market segment in the future. Additionally, on the basis of form, the heterogeneous segment is assessed to acquire the largest share during the forecast period ascribing to the ease of separation provided during catalysis by this type of catalysts. CLICK TO DOWNLOAD SAMPLE REPORT

Regionally, the global hydrogenation catalyst market is segmented into five major regions including North America, Europe, Asia Pacific, Latin America and the Middle East & Africa region. The market in Asia Pacific is estimated to witness noteworthy growth over the forecast period on the back of the increasing investments in oil & gas exploration activities, where hydrogenation catalysts are used for petroleum refining. In addition, high manufacturing of chemicals and specialty chemicals is also expected to drive market growth in the region in the coming years. According to the European Chemical Industry Council, AISBL, the total chemical sales in China in 2020 amounted for USD 1,752.38 billion, with the country contributing for 44.6% of global chemical sales in that year. Moreover, the market in North America is projected to grab the largest share during the forecast period primarily in view of the increasing multidimensional R&D activities about exploring the efficacy of platinum group metals when used as hydrogenation catalysts. 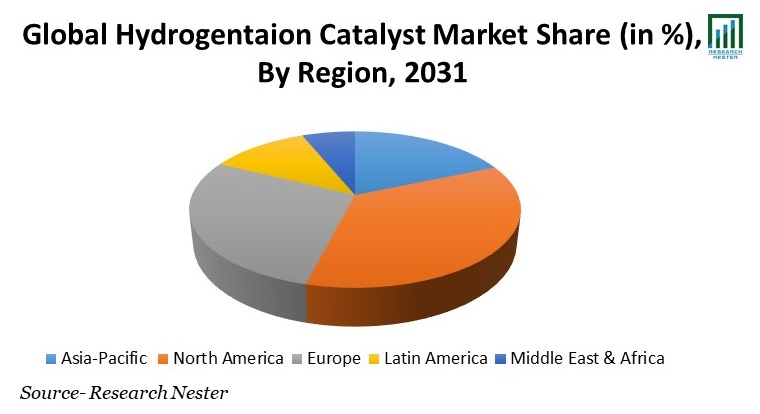 The global hydrogenation catalyst market is further classified on the basis of region as follows:

Our in-depth analysis of the global hydrogenation catalyst market includes the following segments:

What are the major factors driving the growth of the hydrogenation catalyst market?

The major factors driving market growth are rising demand for heterogenous catalysts from industrial and chemical application areas, and growing use of hydrogenation for manufacturing medicines and aroma chemicals.

What would be the CAGR of hydrogenation catalyst market over the forecast period?

Which region will provide more business opportunities for growth of hydrogenation catalyst market in future?

Who are the major players dominating the hydrogenation catalyst market?

The major players in the market are BASF SE, Evonik Industries AG, SOLVIAS AG, W. R. Grace and Co., CRI/Criterion Inc., and others.

What are the segments in the hydrogenation catalyst market?

The market is segmented by product type, form, end user, and by region.

Which segment captures the largest market size in the form segment in the hydrogenation catalyst market?

The heterogenous segment is anticipated to hold largest market size and is estimated grow at a modest CAGR over the forecast period and display significant growth opportunities.

Toxicity of hydrogenation catalysts is estimated to hamper the market growth.