Huntington’s disease is a rare genetic condition that affects the brain and results in degeneration of the nerve cells. It occurs between the age of 30 and 50 and worsens with time. The disorder usually becomes fatal after 20 years of its incidence. The symptoms of this disorder include mood swings, depression, forgetfulness, involuntary movement or chorea and weight loss. It is associated with Parkinson’s disease and Alzheimer’s as well as other health complications. Huntington’s disease can be diagnosed through CT scans and MRIs.

As per the Huntington’s disease Society of America, there are about 30,000 symptomatic people the United States, while over 200,000 people are at risk of inheriting the disease.

The Huntington's disease treatment market is anticipated to record a significantly high CAGR over the forecast period, i.e., 2019-2027. National Institute of Health’s Genetics Home Reference estimates that about 30-50% of children with this disease experience seizures. Further, Huntington’s disease in children progresses more rapidly than in adults and the affected people live 10-15 years longer after the appearance of the symptoms. The market is segmented by drug, by distribution channel and by region. On the basis of drug, the market is segmented into tetrabenazine, antidepressants, antipsychotic drugs, tranquilizers and others, out of which, the tetrabenazine segment is anticipated to witness a substantially high growth in the Huntington's disease treatment market. The drug tetrabenazine has been developed for the treatment of movement disorders. It received FDA approval in 2008, following which it is being used for the treatment of chorea, a form of involuntary movement disorder linked with the Huntington’s disease. CLICK TO DOWNLOAD SAMPLE REPORT 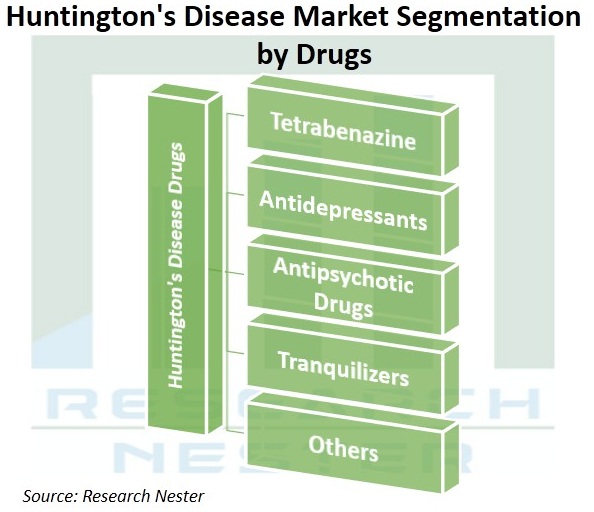 The involvement of major market players in researching for a cure for Huntington’s disease (HD) is a significant factor estimated to result in the market growth. This can be attributed to the rising patient population and prevalence of disease globally, mainly in the North America and Europe region. The requirement for disease-modifying drugs and other treatment methods for HD that is not yet fulfilled is predicted to further impact the market growth positively.

Growing Research and Development Activities to Raise the Market Growth

Since there is no proper treatment or medication for Huntington’s disease, there is a huge scope of research and development of its treatment methods. This is anticipated to significantly raise the market growth over the forecast period. Moreover, the promising government initiatives that promote the development of new drugs is estimated to be another factor supporting the market growth.

Limited Availability of Drugs to Hamper the Market Growth

The number of approved drugs for Huntington’s disease are limited as a result of strict policies and regulations. This is anticipated to hinder the market growth over the forecast period. Furthermore, the lack of awareness about this disorder in major parts of the world is predicted to restrict the growth of Huntington’s disease treatment market.

Our in-depth analysis of the Huntington's disease treatment market includes the following segments:

Based on region, the market in North America is anticipated to hold the largest market share over the forecast period on account of development of new drugs in the region, mainly in the United States. The growing research and development activities in the region are predicted to lead to the innovation of highly effective and improved drugs for the treatment of this disorder. The market in Europe is estimated to hold the second largest share in the market as a result of growing elderly population along with rising research and development activities aiming at Huntington’s disease in the region. The market in Asia Pacific region is anticipated to remain the same as the incidence of this disease is highly rare in the region. 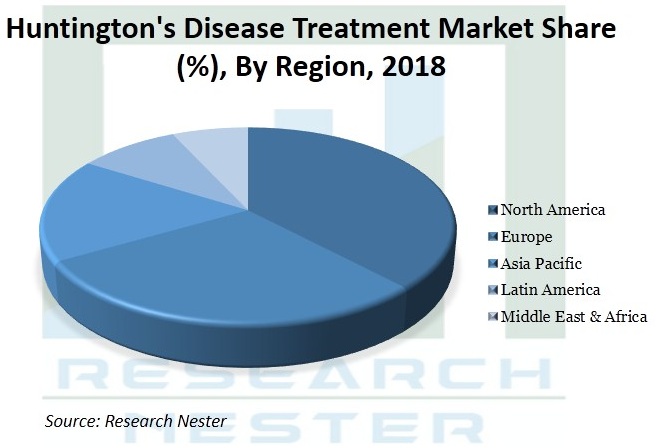 The Huntington's disease treatment market is further classified on the basis of region as follows: