The Human Chorionic Gonadotropin (hCG) Test market is estimated to grow with a high CAGR during the forecast period, i.e., 2021-2029. The increasing infertility rate globally, along with the growing investment in the innovation of technologically improved products are expected to fuel the development of this market. The growth of the market can also be attributed to factors such as the increasing awareness among the population towards gynaecological problems and the rising middle-class population in the emerging economies on a global level. According to the data collected from the World Health Organization (WHO), in September 2020, approximately 48 million couples and 186 million individuals across the globe lives with infertility. Such increasing number of infertility rate has rapidly increased the requirement for human chorionic gonadotropin (hCG) test in the market. The rising shift of traditional lifestyles to western lifestyle adoption along with poor dietary habits among individuals are expected to make a significant contribution to the soaring revenue of the human chorionic gonadotropin (hCG) test market. Gynaecology is one of the important branch of medicine concerned with medical issues among women. As a result, it includes conditions associated to wellbeing of women and their testing and screening methodology. Women’s body is predominantly prone to various types of cancer, including, breast cancer, cervical cancer, and ovarian cancer. Other rising medical conditions such as polycystic ovarian disorder, infertility, menopause, depression, osteoporosis, and obesity. Human chorionic gonadotropin (hGC) is a hormone produced by placenta in a pregnant women and is a type of gonadotropin hormone. 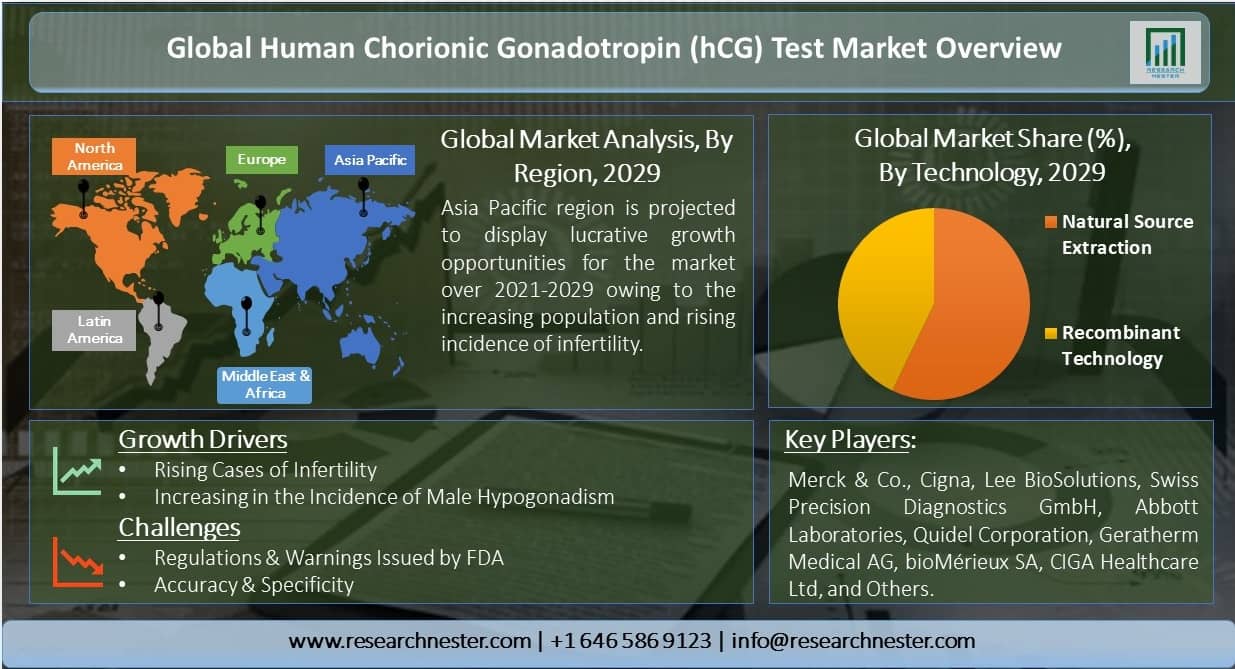 The market is segmented based on technology into natural source extraction, and recombinant technology, out of which, natural source extraction segment is anticipated to grab the largest share by the end of 2021 on account of increased number investments by the major players to extract gonadotropins from natural source. However, increasing government approval of digital devices globally is also projected to contribute to the growth of the recombinant technology segment is expected to increase with a rapid growth rate on the back of increasing availability of recombinant hCGs during the forecast period.

Based on therapeutic area, the female infertility segment held the largest share in the global Human Chorionic Gonadotropin (hCG) Test market on the back of growing concern and awareness for infertility among the couples and individuals across the developing and under-developed countries.

Geographically, the market is segmented into North America, Latin America, Europe, Asia Pacific and the Middle East & Africa region. The market in the Asia Pacific is predicted to grow at the highest CAGR over the forecast period owing to the growing population, increasing concern and awareness among the individuals in the region. Furthermore, in 2021, the market in North America is evaluated to occupy the largest share in terms of revenue, owing to the increasing incidence of infertility among the women aged between 15-44 years in the region. According to the report published by the Centers for Disease Control and Prevention (CDC), annually approximately 10% of the women which accounts for 6.1 million in the United States face difficulty to conceive or staying pregnant. Such increasing issues during the reproductive age among the individuals and couples is further expected to drive the demand for Human Chorionic Gonadotropin (hCG) Test in the North American countries. Alternatively, the market in Europe is also anticipated to occupy a significant share in the global Human Chorionic Gonadotropin (hCG) Test market on account of its proven success in terms of technology development in the region. 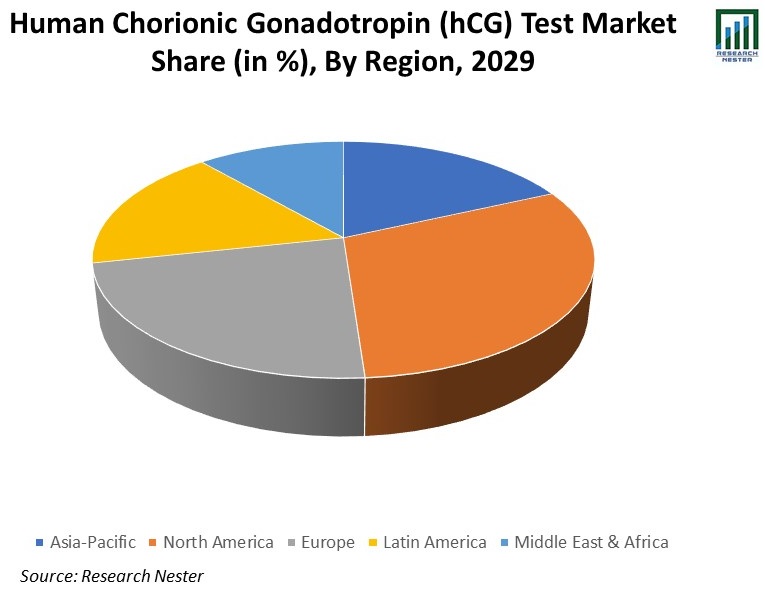 The global Human Chorionic Gonadotropin (hCG) Test market is further classified on the basis of region as follows:

1) What are the major factors driving the growth of the human chorionic gonadotropin test market?

Ans: Rising cases of infertility and increasing in the incidence of male hypogonadism are the key factors driving market growth.

2) What would be the CAGR of human chorionic gonadotropin test market over the forecast period?

3) What are the challenges affecting the human chorionic gonadotropin test market growth?

Ans: With respect to therapeutic area, the female infertility segment is anticipated to hold the largest market share owing to the growing number of infertility cases among the young women.

Ans: The market in Asia Pacific region will provide ample growth opportunities owing to the increasing population and infertility among individuals.

5) Who are the major players dominating the human chorionic gonadotropin test market?

7) What are the segments in the Human Chorionic Gonadotropin (hCG) Test market?

Ans: The market is segmented by technology, therapeutic area, end-user, and region.

8) Which segment under the therapeutic area segment captures the largest market size in the Human Chorionic Gonadotropin (hCG) Test market?

Ans: With respect to therapeutic area, the female infertility segment is anticipated to hold the largest market share owing to the growing number of infertility cases among the young women.