Extensive insights into the Growth of Hosiery Market amidst COVID-19

In the present time, people are getting more serious about their looks and overall appearance, starting from what they wear and how they look. This is one of the major reasons behind the strong growth of fashion & apparel industry around the globe. One among the huge fashion trends is the hosiery segment which is mostly popular amongst the female population especially the ones who want to make a fashion statement based on the look they want, be it a demure look, a seductive or an appealing look. Further, there is a growing fashion consciousness among people, from teenagers to adults along with a growing desire to access designer clothes. In addition to that, the manufacturers are introducing various hosiery products through promotional activities such as fashion shows and advertisements to promote their hosiery products globally. The availability of variants in hosiery with various designs and colors are predicted to augment the growth of the global hosiery market with remarkable revenue of around USD 47,258.1 Million by the end of 2024 from USD 36,100.5 Million in 2016, expanding at a compound annual growth rate of 3.5% during the forecast period.

The global hosiery market is segmented by regions into North America, Latin America, Europe, Asia-Pacific and Middle East and Africa, out of which, Europe is predicted to expand with highest market share of around 35.3% in overall hosiery market around the globe by the end of 2024 which is believed to be fostered by the increase in spending on the fashion apparels and accessories. Besides, European hosiery market is witnessing a wide gamut of activities such as launch of high quality and comfortable hosiery products and development of new textile materials. These factors signal promising growth of the Europe hosiery market where U.K., Germany and Italy have the prominent markets in the region. The market of hosiery in Germany is expected to achieve Y-o-Y growth rate of 2.1% in 2024. CLICK TO DOWNLOAD FREE SAMPLE REPORT 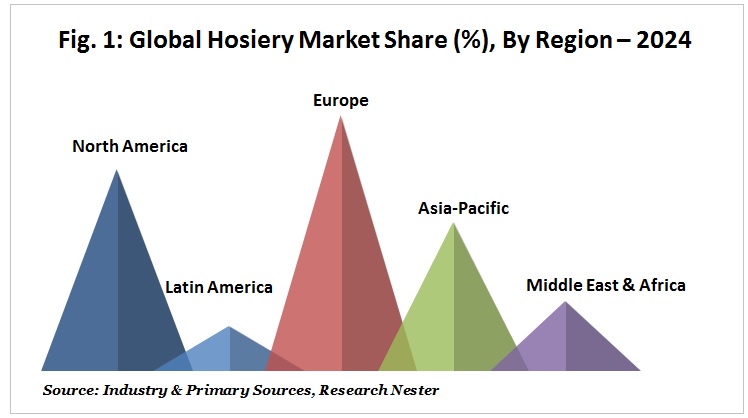 Factors such as high disposable income, vast spending on apparels and presence of many international and domestic vendors in the market is expected to aid the growth of North America with second largest market share in overall hosiery market. Further, Asia Pacific is expected to witness lucrative growth by registering a CAGR of 5.6% over the forecast period where China hosiery market accounted for a leading market share of 22.5% in Asia Pacific hosiery market in 2016. 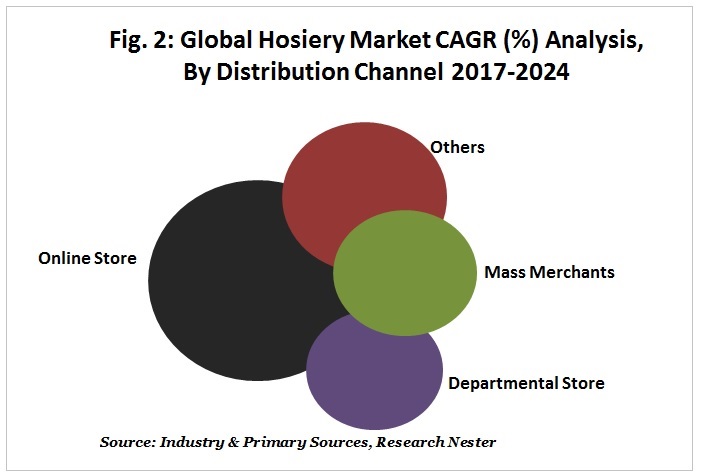 The global hosiery market is segmented by gender into men and women, out of which, the women segment held the dominant share in 2016 and is believed to behold its positive growth over the forecast period. The women hosiery segment is expected to reach noteworthy market valuation by the end of 2024 from USD 31,300.2 Million in 2016, whereas the men hosiery segment is predicted to expand with highest CAGR during the forecast period along with Y-o-Y growth of 5.7% in 2024. 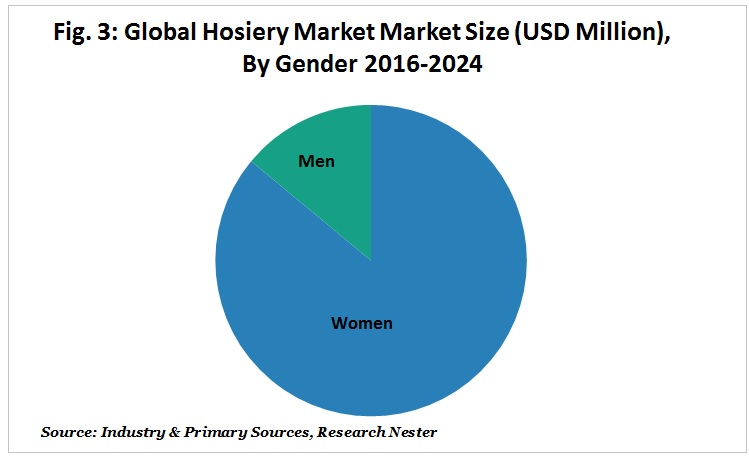 The global hosiery market is divided by product type into socks, tights, leggings, knee highs, opaques, stay-ups, stockings, panty hose, over knees and others, out of which, socks is the highest selling segment followed by tights. Further, the leggings segment accounted for 5.8% market share in 2016 and is likely to account for 5.7% market share by 2024. Moreover, the other hosieries segment is expected to grow at a CAGR of 2.1% over the forecast period and is expected to observe a growth rate of 1.15x over the forecast period.

The global hosiery market is divided into three segments of price-range i.e. low, med and premium. Among these segments, the low price range segment accounted for USD 15,896.7 Million in 2016 and is believed to retain its positive stance by the end of 2024. Further, the premium hosiery segment is projected to achieve Y-o-Y growth rate of 4.3% in 2024, wheras the mid price range segment is expected to grow with highest CAGR of 3.9% over the period 2017-2024.

The global hosiery market is thriving on the back of growing fashion consciousness among female population including teenagers as well. There is an increase in number of fashion conscious people along with growing popularity of western wear and desire to access designer clothes in the consumers. Further, enhanced living standards of population are also one of the major factors that are likely to augment the demand for hosiery products in both developed and developing countries over the forecast period.

There is presence of low quality products and the lack of compatibility of hosiery with traditional apparels which is likely to limit the growth of global hosiery market in future. Additionally high cost of branded hosiery and low demand for hosiery during summers might dampen the demand for hosiery in upcoming years.

The CSP International Fashion Group S.p.A., a European based company primarily engaged in the manufacturing and distribution of stockings, tights, corsetry, underwear, fashion and beachwear products aggressively acquired various companies in the past few years such as Perofil Fashion Srl, Oroblù Germany GmbH and many more that further helped the company to maintain its market position and become a global leader in hosiery and underwear market combined with widening the company portfolio for various business segment.

Moreover, other key and niche players are working towards the expansion of product portfolio by spending huge capital in high quality R&D along with aggressively acquiring small players to grab maximum market share in the global hosiery market.