HIV stands for Human Immunodeficiency Virus that is responsible to cause acquired immunodeficiency syndrome which is a combination of symptoms/conditions. During the initial infection, there are no noticeable symptoms and the patient may suffer from influenza-like illness. As the progression of the infection takes place with the passage of time, the risk of acquiring common types of infection increases which includes general infections, tumors, tuberculosis etc. The later symptoms of HIV syndrome are typically referred to as acquired immunodeficiency syndrome.

HIV can be caused due to spectrum of reasons which includes contaminated transfusion of blood, unprotected sex, through contaminated needles, pregnancy and birth etc. Body fluids including tears, sweat do not transmit this infection to other non-infected person. There are many misconceptions and general beliefs of society regarding HIV/AIDS.

The HIV/AIDS can only be controlled by proper management with the used of antiretroviral drugs/HIV drugs which are further divided into different classes. For controlling AIDS, multiple drugs act on several targets of viruses which is technically known as highly active antiretroviral therapy (HAART). This therapy only supports the immune system and also potentially prevents the patient from several types of infections. HIV drugs have the potential to decrease the viral loads and also helps the immune system to fight infections. The main objectives of these medications include restriction of several symptoms, improving the performance of immune system, strictly controlling the growth of viruses along with helping to restrict the transmission of this virus.

The market is observing robust growth on account of increasing number of HIV infected patients and various types of government initiatives to support the prevention and control of AIDS. Further, an increase in the diagnosis and treatment rate coupled with rising awareness among people in various countries about different potential symptoms and causes of HIV/AIDS is anticipated to boost the growth of the market around the globe. Additionally, huge investments in the field of drug research and development and various advancements in the healthcare sector is also expected to drive the growth of the market. Wide availability of Anti-retroviral therapy (ART) is also a major factor which is supporting the overall growth of the market. The lack of awareness among people in various nations about protected sex is expected to raise the population of patients suffering from HIV/AIDS.

The global HIV drugs market is anticipated to record a CAGR of 3.8% over the forecast period i.e. 2019-2027. The market is segmented by medication class into nucleoside reverse transcriptase inhibitors (NRTIs), non-nucleoside reverse transcriptase inhibitors (NNRTIs), multiclass combination drugs, protease inhibitors (PIs), fusion Inhibitors, HIV integrase strand transfer inhibitors, entry inhibitors- CCR5 co-receptor antagonist, out of which, the multi class combination drugs is anticipated to have the largest market share in the market as it is the most recent method to treat HIV/AIDS. 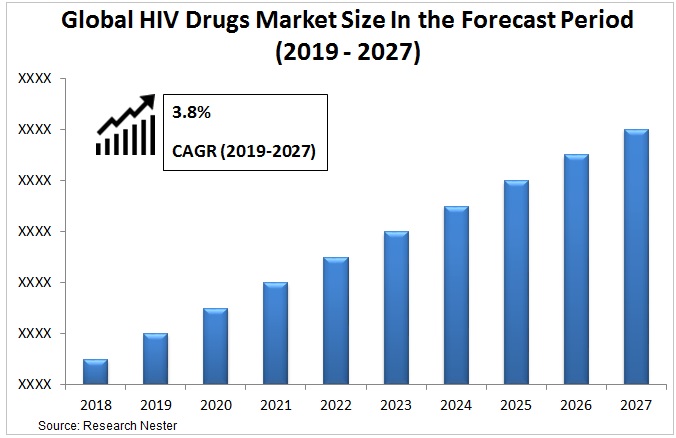 Increased prevalence of HIV/AIDS Across the Globe

There is an increase in the prevalence of HIV/AIDS across the globe. According to the World Health Organization (WHO), more than 35 million people have lost their lives on account of AIDS and more than 70 million people        have been typically infected by the human immunodeficiency virus (HIV). Worldwide, 36.9 million people were living with HIV infection at the end of the year 2017. Approximately, 0.8% adults who are aged in between 15-49 years globally are suffering from HIV. The HIV/AIDS epidemic varies in different countries. According to WHO, the African region is most severely affected by HIV. This increase in the number of AIDS is expected to increase the demand for HIV drugs across the globe which is further anticipated to drive the global HIV drugs market over the forecast period.

Various Initiatives by the Government to Raise Awareness about AIDS Management

The Government of India is launching various programs and initiatives for the proper control and effective prevention of HIV/AIDS. In 1992, the Government of India launched the National AIDS Control Program (NACP) which had an important objective to reverse the epidemic by the end of a specific period. For reversal of HIV/AIDS, antiretroviral drugs or HIV drugs are used. This increase in various initiatives and programs are anticipated to help the market to grow over the forecast period.

The average annual cost for a patient suffering from HIV/AIDS for HIV treatment is very costly which is even more if the patient is more immunosuppressed. These factors are anticipated to restrain the growth of the market during the forecast period.

North America region is anticipated to have half of the share of the HIV drug market which can be attributed to higher expenditure of the government on research and development, increment in the adoption of advanced therapy and treatment options and also because of the well-established healthcare sector.

Asia Pacific region is also anticipated to show a vibrant growth over the forecast period. This is due to the lack of awareness among people about protected sex and sex education in the developing areas.

The global HIV drugs market is further classified on the basis of region as follows: