The gonorrhea treatment drugs market is estimated to grow at a modest CAGR over the forecast period, i.e., 2021 – 2029. The growth of the market can be attributed to the growing prevalence of gonorrhea, increasing incidents of unprotected sex, and rise in implementation of national screening programs. In 2018, more than 1.5 million gonococcal infections occurred in the United States. Among these, more than half of the people were aged between 15-24 years. Along with these, huge investments in the R&D activities to develop effective treatment options is also expected to drive market growth in the near future. Furthermore, improvement in healthcare infrastructure in developed nations and expanding advent of new diagnostic tests are evaluated to offer lucrative opportunities to the market in the coming years.

The market is segmented by treatment into monotherapy and dual therapy, out of which, the dual therapy segment is anticipated to hold the largest share in the gonorrhea treatment drugs market on account of increasing preference of this therapy over monotherapy for treating symptomatic and asymptomatic gonorrhea, and the rising adoption of the treatment regime globally. Moreover, as dual therapy with azithromycin and ceftriaxone is considered to be as the first-line regimen for treating gonorrhea, the segment is anticipated to also witness noteworthy growth in the forecast period. Additionally, on the basis of distribution channel, the segment for hospital pharmacies is evaluated to occupy the largest market share during the forecast period. This can be credited to the ease to receive prescribed medicines from the hospital facility itself. 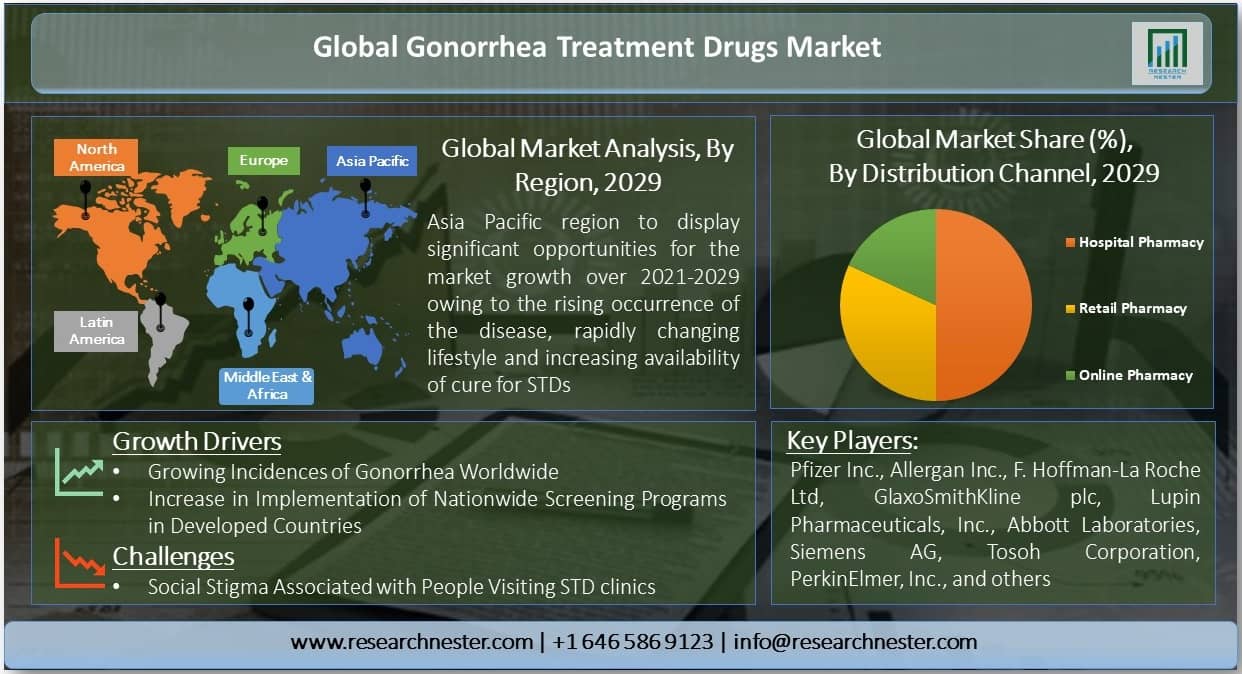 On the basis of geographical analysis, the gonorrhea treatment drugs market is segmented into five major regions including North America, Europe, Asia Pacific, Latin America and the Middle East & Africa. The market in North America is estimated to acquire largest share over the forecast period on the back of easy availability of advanced technology and high standards of healthcare infrastructure in the region. In addition, increasing awareness about the disease and promising reimbursement policies are also expected to drive market growth in the region. However, the market in Asia Pacific is assessed to witness the highest growth during the forecast period ascribing to the rising prevalence of the disease, rapid change in lifestyles and growing availability of cure for sexually transmitted diseases in the region. In India, more than 5% of the population is affected with a STD. On an average, every year 8-25% men suffer from gonorrhea.

The gonorrhea treatment drugs market is further classified on the basis of region as follows:

Our in-depth analysis of the gonorrhea treatment drugs market includes the following segments:

What are the major factors driving the growth of the gonorrhea treatment drugs market?

Increasing prevalence of gonorrhea globally and growing implementation of national screening programs are major growth drivers for the market.

What would be the CAGR of gonorrhea treatment drugs market over the forecast period?

What are the challenges affecting the gonorrhea treatment drugs market growth?

Which region will provide more business opportunities for growth of gonorrhea treatment drugs market in future?

Asia Pacific will provide more business opportunities in the future owing to the increasing prevalence of gonorrhea and rapidly changing lifestyles.

Who are the major players dominating the gonorrhea treatment drugs market?

The major players in the market are Pfizer Inc., Allergan Inc., F. Hoffman-La Roche Ltd, GlaxoSmithKline plc., and others.

What are the segments in the gonorrhea treatment drugs market?

The market is segmented by treatment, infection type, distribution channel, and by region.

Which segment captures the largest market size in the distribution channel segment in the gonorrhea treatment drugs market?