Diabetes is a disease in which the blood glucose levels rises in the body because of lack of insulin production or the inability of insulin to help glucose to get inside a cell. Glucose helps the body to get energy. The increase in the level of blood glucose in the body is medically termed as hyperglycemia whereas the decrease in the concentration of glucose is termed as hypoglycemia. Both these conditions can be fatal to a person. It has the potential to damage kidneys, nerves and heart. There are mainly three types of diabetes which includes Type-1 Diabetes, Type-2 Diabetes and Gestational Diabetes.

Glucose Test Strip Market is anticipated to record a CAGR of approximately 5.5% over the forecast period. Thus, the glucose test strip market is expected to showcase a robust growth by the end of the forecast period. The market is segmented into end users such as diagnostic and hospital laboratories, clinics & home care settings. Increasing demand of point of care (POC) is anticipated to aid in capturing high market share during the forecast period. Real time monitoring of blood glucose is one of the important feature which is expected to drive the growth of the global glucose test strips market.CLICK TO DOWNLOAD SAMPLE 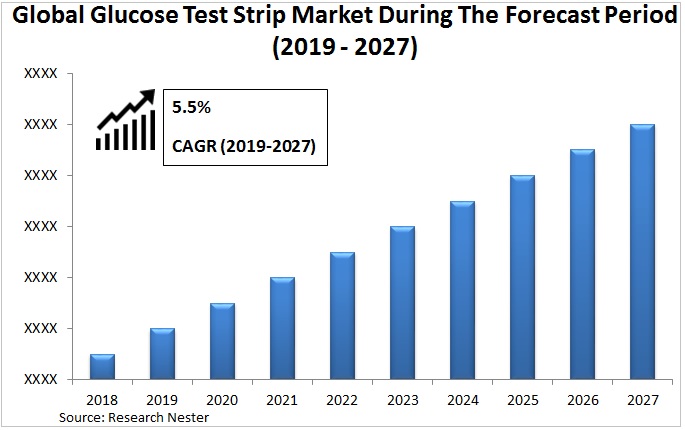 The number of diabetic patients is increasing worldwide each year. It is very important to monitor blood glucose regularly on a daily basis. Glucose test strips plays an important role in measuring the blood glucose levels. At a very large scale, diabetic patients widely use glucose test strips. According to the data of International Diabetic Federation, 425 million people is suffering from diabetes worldwide with 82 million people in the South East Region, which is estimated to multiply and reach 151 million by 2045. There were over 72 million cases of diabetes in India in the year 2017 alone. This rise in the diabetic population in the world is anticipated to drive the glucose test strip market in the forecast period.

Increase in financial support by the government

North America has a significant market share of the global glucose test strip market as they are technologically advanced in the field of medicine and healthcare. Europe has the largest share of the glucose test strip market. The market of Asia Pacific region is anticipated to expand at a faster pace in the forecast period owing to rising awareness regarding diabetes. Increment in the prevalence of diabetes in countries including Brazil, South Africa, Saudi Arabia is expected to drive the market in the Middle East and Latin America region.

Global glucose test strip market is further classified on the basis of region as follows: