Thin film panels are made with solar cells that have light absorbing layers about 350 times smaller than that of a standard silicon panel. Because of its narrow design and the efficient semi-conductor built into their cells, thin film solar cells are the lightest and durable PV cell.

Factors such as carbon offset, efficiency, roof space and installation cost distinguishes thin film from standard solar panels. In terms of carbon offset, the emissions required to create a thin film cell and panel are much lower than mono or polycrystalline panels. Efficiency has been one of the preventing factors for thin films from gaining a foothold in residential PV market. Standard silicon PV panels have efficiencies of 15-16%, while thin film panels are closer to 11-13%, which significantly impacts system’s size and output. Installation cost differ considerably between thin film and typical PV reason being thin film panels are very easy to install and require much less labor. Factors, such as increasing population, advancement in technology, rapid industrialization in emerging markets (such as India and China), rising standard of living, and globalization are driving the global demand. It is anticipated that the cost reduction potential, as well as efficiency increase potential in case of silicon based PV modules are limited. The growth of these technologies is also being driven by newer applications of solar panels, such as for building integrated photovoltaic (BIPV), rooftops / facades and applications that demand more flexibility, as well as low angle installations.

The market is segmented by type (organic PV, inorganic PV); by component (thin film PV cells, crystalline silicon PV cells); by application (residential, utility, consumer, military and non-residential). Based on application, next generation thin film technologies, including organic PV’s are being researched for low cost, high efficiency solar cells. Based on component, crystalline silicon PV cells have dominated the solar PV market. However, it is anticipated that the cost reduction potential, as well as efficiency increase potential in case of silicon based modules are limited. On the basis of application, the thin film photovoltaic market can be segmented into residential, utility, consumer, military, and non-residential sectors. The utility sector can be further categorized into military, power plant application, defense, and industrial applications. 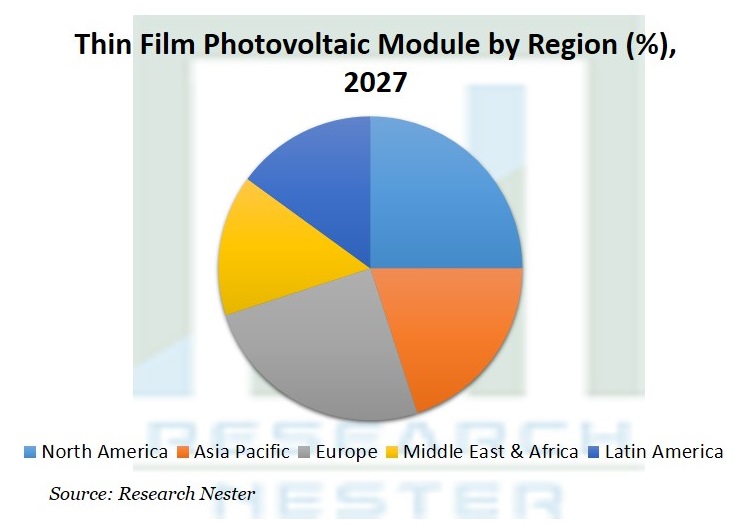 Owing to improvements in technology made possible through use of new materials at reduced cost, manufacturing of thin film PV modules has scaled up. As a result of heavy funding and government support in the form of subsidies, the prices of solar energy have plummeted by over 60% over the last decade.

In addition, next generation thin film PV technologies, such as dye sensitized solar cells (DSCs), organic PV, and perovskite PV, are being developed. These next generation technologies are anticipated to gain more importance in the long term as they are believed to be superior in terms of energy generation capacity as well as flexibility.

High initial manufacturing cost and technological complexity related to the use of thin-film solar cells are expected to hamper the market growth. Low conversion efficiency and multi-junction PV cells coupled with other factors such as poor installation, high capital costs, and poor maintenance practices are estimated to negatively impact market growth.

North America and Europe are anticipated to lead the market owing to early adoption of these technologies. European region is expected to be driven by countries such as Italy, Germany and Spain on account of growing demand for solar energy.

Asia Pacific is also expected to register significant growth on back of increasing adoption of semiconductors in the electronics industry. Emerging markets such as China, India are expected to show their presence.

The thin film photovoltaic module market is further classified on the basis of region as follows: