Surface Protection Films Market Segmentation By Material type (Polyethylene Terephthalate (PET), Polyethylene (PE), Polyurethane (PU), Others); By Thickness (Up to 25 microns, 25 to 50 microns, 50 to 100 microns, 100 to 150 microns and Above 150 microns); By Application (Glass, PVC Profiles, Carpet Protection and Others); By Transparency (Clear Transparent, Tinted/Colored); By End Use Industry (Electronics, Construction & Interior and Others)– Global Demand Analysis & Opportunity Outlook 2027

Surface protection films are generally used to prevent scratches of the surface and safeguarding the surface from dust particles. It gives protection from damage, transportation, moisture, high corrosion and wear and tear of daily use. They deliver life span to items and are used to provide affordable approach to safeguard costly items and are unaffected by penetration of environmental components such as chemical components.

The design of these films contains polymer-based substrate layer which is coated with an adhesive layer. They are easily peeled out after finishing operations and ensure quality of surface without leaving any residue or marks after the film is removed. Protective films can be cut, slit, packaged or rolled according to the requirements.

An increase in digital awareness has led to more people exploring new gadgets such as smartphones and tablets where surface protection films are widely used. Growing electronics base among the consumers, proliferation in middle-class population around the globe, developing e-commerce popularity among the consumers and rise in technological advancements and penetration of internet and smartphones across the globe is contributing towards the growth of the market. Moreover, increase in disposable income with rise in the interest in renovation of residential spaces has driven the investments in activities such as interior designing which upsurges the demand for surface protection films in order to prevent the breakage of floors, damage and scratches to the structure.

The surface protection films market was valued at USD 1.34 Billion in 2018 and is estimated to cross USD 2.6 Billion by 2027. The market is anticipated to record a CAGR of around 5.32% over the forecast period i.e. 2019-2027. The market is segmented by material type, thickness, application, transparency & end use industry. The market is segmented by application into glass, PVC profiles, carpet protection, plastic sheets, metal sheets, furniture surfaces and others, out of which, plastic sheet segment is anticipated to have significant growth on account of rise in the use of surface protection films in electronics goods across the globe.

The market is further segmented by material type into Polyethylene Terephthalate (PET), Polyethylene (PE), Polyurethane (PU), Polypropylene (PP), and Polyvinyl Chloride (PVC). On the basis of thickness, the market is segmented into up to 25 microns, 25 to 50 microns, 50 to 100 microns, 100 to 150 microns and above 150 microns out of which 50 to 100 microns segment is anticipated to have leading shares owing to their property of provide adequate thickness and protection to the surface.

By transparency, the market is segmented into clear transparent, opaque, translucent, tinted/colored. The market is segmented by end use industry into electronics, construction & interior, healthcare, automotive and others, out of which, the construction and interior segment is expected to have significant growth on account of increasing per capita income of the consumers. Growth in the construction activities and rise in urbanization in developing countries is expected to drive the surface protection films market. Automotive segment is estimated to have leading shares owing to increased demand for cars from the consumers across the globe.

The players in the market may face intense competition among themselves in the coming years on the back of the rising investments in research and development activities, product technologies and innovations along with improvements in quality of the product. CLICK TO DOWNLOAD SAMPLE REPORT 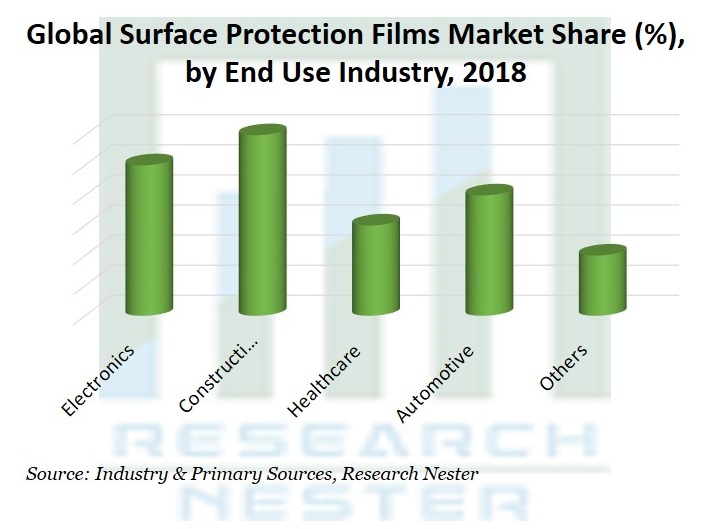 Construction activities in developing countries led to the air pollution which emits various dust particles and get penetrated on various products. Here, surface protection films play an important role in protecting the surface of products and also reducing the wear and tear. This is the primary factor anticipated to drive the growth of the surface protection films market during the forecasted period.

Protective films act as complimentary products and their demand depends on the growing demand for substrates in the end use industry, thus boosting the growth of the market.

The chemicals used in the production of surface protection films are harmful and come in contact with the human body can have a negative impact on the health of the humans. This acts as a restraining factor for the growth of the market during the forecasted period.

Asia Pacific region is anticipated to have largest share in the market owing to growing construction activities in the developing countries such as India and China leading to dust particles being emitted in the air and requires protection from those particles. Additionally, rise in industrialization and urbanization, increasing middle-class population with developing purchasing power of the consumer have contributed towards the growth of the market during the forecasted period. North America is estimated to have largest contribution in the market owing to large consumer base with developed economy in the region.

The surface protection films market is further classified on the basis of region as follows: