Introduction To Pipeline And Process Services

The market of pipeline and process services is observing vibrant growth on account of rising demand for safe and reliable transportation of petroleum products from drilling sites to end-use locations. Furthermore, opportunities observed in the deployment of new drilling sites and its associated pipeline connectivity network are some of the significant factors that are expected to boost the growth of the pipeline and process services market.

The market is anticipated to record robust CAGR throughout the forecast period, i.e. 2019-2027. The market is segmented by asset type into pipeline and process, out of which, the pipeline model is further segmented into transmission and distribution. The distribution segment is anticipated to have largest market share, on account of growing demand for deployment of new pipeline networks and rise in the number of new oil drill sites. 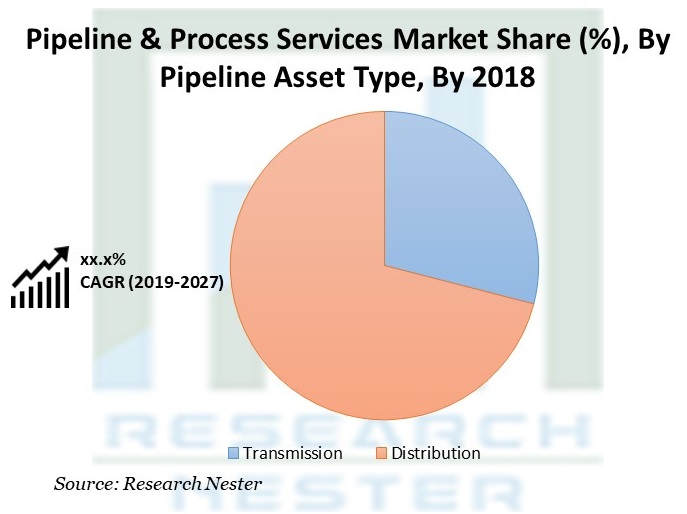 Need For Safe, Economical And Reliable Connectivity Of Pipeline Network

According to the Transportation Board of Canada, four pipeline transportation occurrences in the month of July, 2019. Out of the four incidents that happened, first occurred due to the release of low vapor pressure hydrocarbons, second due to fire, third due to pipeline contacted by object and the fourth due to environmental activity.

Riding on the back of these statistical data, rising oil spills arising from transportation occurrences is a major environmental concern. Driven by such incidences, there is a growing need amongst enterprises for safe and reliable pipeline connectivity network. Regular troubleshooting and maintenance activities are some of the steps taken by enterprises, in order to curb these growing incidences.

According to a statistical data cited by Baker Hughes, rotary rigs in Saudi Arabia grew from 84 numbers in June, 2012 up to 125 numbers in July, 2019.

Enterprises are on a regular search for new oil drilling sites so as to mitigate demand supply gap. Increasing competition for exports of oil, and self-sufficiency amongst nations have led to growing investments for development of new oil rigs. The increase in demand for investments, combined with growing count of oil rigs are some of the factors anticipated to support the growth of the pipeline and process services market throughout the forecast period.

Issues In Inter-Continental Laws And Regulations

Oil and oil products are transported by rail, water or pipeline networks. When the transportation medium is a pipeline network, the pipelines are laid and bridged amongst various in-between nations to reach the end-user from the point of supply. The process results in deployment of various law and regulatory processes on account of these inter-continental laid pipeline connections. Changes in regulatory norms for deployment of pipe networks in such nations are a threat to the pipeline and process services market.

Our in-depth analysis of the pipeline and process services market includes the following segments:

By End User Location Of Deployment

Further, Asia-Pacific is expected to gain significant market share on account of growing consumption of crude oil and natural gas. Developing nations, such as India and China are estimated augmented to lead the market in the region, owing to expansion of their existing pipeline network.

The pipeline and process services market is further classified on the basis of region as follows: