Form fill seal (FFS), films are the plastic films which is extensively used in the FFS technology for packaging of agriculture, food, pharmaceuticals, building & construction material and other products. They are available in various thickness types and are used in many applications such as sachets, stick packs, pouches, bags & sacks. Good machinability and high sealable nature are the properties that make the FFS films superior than other competing formats of packaging.

FFS films are scientifically engineered with state-of-the art lamination and advanced technologies in order to maintain freshness, quality and integrity of the products during their lifecycle. These films can be supplied in order to suit various packaging temperatures and to meet the requirements for various products such as dairy, bakery, cooked, cured and fresh meats and whole salads, fruits and vegetables.

The global form fill seal films market is anticipated to record a CAGR of around 3.9% over the forecast period i.e. 2019-2027 on the back of rising popularity of the FFS technology as a cost effective and contamination-free technology. The market is segmented by material, layer structure, thickness & end users. The market is segmented by material into polyethylene, polypropylene, polystyrene, polyethylene terephthalate, polyvinyl chloride, ethylene vinyl alcohol and others out of which, the polyethylene segment is anticipated to have leading shares on account of being manufactured from a variety of plastic resins. Polyethylene is expected to account for a large share in the market.

The market is further segmented by layer structure into monolayer and multilayer out of which, multilayer segment is anticipated to have leading shares owing to being able to give high protection to the product when packaged with the form fill seal films.

The market has been further bifurcated by end user into healthcare & pharmaceuticals, building & construction, agriculture, chemical industry, tobacco, food industry and others out of which, food industry segment is projected to have leading shares on the back of food items needing more protection against leakage and damage. Moreover, large number of food items are perishable in nature. In order to protect them and give them longer life, these films play an important role.

FFS films market is witnessing increased cost savings for complete packaging as compared to other forms of packaging. Huge investment has been made in the latest technologies by the companies so that they can offer best technical and high quality FFS film solutions such as when stored or during transportation, for the various packaging needs.

The form fill seal films are used in various applications. These films provide high protection to the product and is widely used by the companies for the packaging of their products. The films offer good seal properties and the product is protected when packaged in these films. It is used to pack food, cosmetics, pharmaceutical products and many more. This factor is anticipated to boost the growth of the market during the forecast period.

The chemicals used in the manufacturing of these films are harmful for the humans and as well as for the environment. These films are mostly made of plastic which cannot be recycled and this may ultimately harm the environment to a large extent. It is manufactured from variety of plastic resins that harm the natural resources when dumped. This factor is expected to hamper the growth of the market during the forecast period.

North America region is anticipated to have leading shares and to witness a lot of growth potential for the form fill seal films in the near future. Canada is projected to be highly attractive in terms of growth rate while, the U.S. is predicted to remain a prominent area during the forecast period. Europe is anticipated to have significant growth for the market. Asia Pacific region to follow Europe, in terms of volume and value on account of continuous expansion of various end use industries and high penetration of the form fill seal technology. In East Asia, China is projected to be highly attractive market and South Asian region to be the substantial contributor towards the FFS films market and is estimated to surpass other regions in terms of growth rate owing to increase in popularity of the FFS technology in various end use industries and this is expected to generate huge demand and opportunities for the FFS films in the coming years. 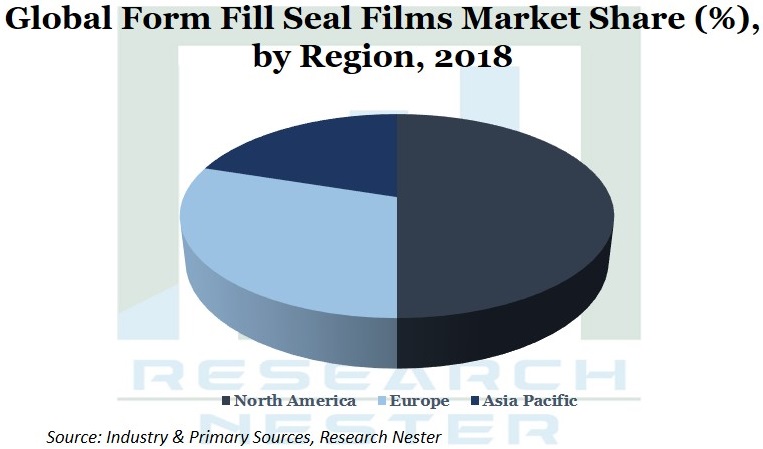 The global form fill seal films market is further classified on the basis of region as follows: