A digital game is a program which is designed to provide interactive experience to the player for both educational as well as commercial purposes. Virtual environment provided by the digital games do not limit players by physical space or by hands on access, rather it encompasses large spectrum of cultural and media activities based on digital technologies. The latest technologies have provided new levels to digital gaming by integrating different features for instance, voice recognition, 3D gaming, GPS tracking and many more to provide players with real life experiences. The high speed internet and various other network technologies have provided players with high quality gaming with live streaming.

The global digital gaming market is anticipated to record a CAGR of around 16.5% over the forecast period i.e. 2019-2027. Escalating use of smartphones and tablets which have virtual reality, augment reality and mixed reality gaming features is projected to strengthen the market growth. The improvement in internet accessibility and other technologies to support proper working of online games coupled with provision of better social interacting applications and improved gaming experience with companies coming up with new advancements and developments for instance Gameloft, EA sports, Ubisoft is expected to drive the market growth.

The market is segmented by distribution channel, game subscription model, platform, audience and device. The distribution channel is further segmented into retail and digital out of which, the digital segment is anticipated to have leading maximum share in the revenue on account of increasing use of electronic devices for instance, mobile phones, tablets and many others. The effective provision of internet to support the download of games, possibility of 3D gaming and other such features are expected to drive the market growth. The market is further segmented into mobile, PC and console on the basis of device, out of which, the mobile segment is expected have leading shares and is anticipated to grow at a rate of CAGR of around 24% during the forecast period on the back of increasing usage of mobile phones and rising accessibility, affordability and convenience of buying the mobile phones.

The features that have been incorporated in the smartphones to provide high end user experience by using voice recognition, customizable features, interactive drama, open world, wearable gaming and augmented reality gaming are expected to drive the market growth. The mobile segment is followed by console and then PC, the segments are expected to witness significant growth on the back of increasing consumer engagement with them owing to rising competitive gaming and e-sports. The increasing prevalence for mobile devices has resulted into reduction of average prices of pay to play games on PC and console thereby creating a market for them. Additionally, the rising adoption of live streaming and e-sports is expected to grow the console segment at a rate of around 4.5% and PC segment at a rate of around 2% during the forecast period. The technical advancements and recent up gradations for instance, development of Viro Move which deals with next level VR gaming, role playing gaming as in Pillars of Eternity and many others are expected to drive the market growth. 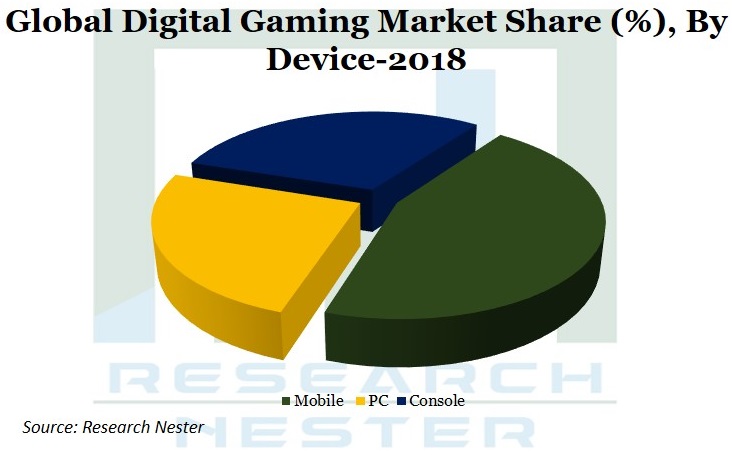 The increasing smartphone users with better internet facilities have led to the increased demand for digital gaming. The rising demand for electronic devices with better facilities and applications has resulted in a better user experience coupled with increasing disposal income and improved global economic growth. The developed nations have high console user, whereas most of the developing countries have high smartphone users owing to which the market in these regions is expected to experience high product demand.

Digital games require huge investment of money and time at a development stage coupled with the distraction of user from the regular tasks and takes a lot of time for the user to develop skills from these games, thereby negatively impacting their performance which is expected to act as a restraint in the growth of global digital gaming market.

North America is anticipated to witness a significant growth at a CAGR of around 16% during the forecast period owing to presence of key market players and high consumer base as the people in the region are more inclined towards console gaming owing to their high income and affordability. Europe is expected to witness steady market growth on the back of increasing mobile device users. Asia-Pacific is expected to have leading market share of around 52% generating major proportion of the global digital gaming revenue on the account of presence of majority of mobile online gamers. The countries such as China, Japan, India and Korea are expected to be the major contributors on the account of both presence of market players as well as gamers. China is expected to have almost a quarter of game revenue and players followed by Japan which is expected to witness a growth of 15% during the forecast period. Additionally, Latin America is expected to witness high revenue generation owing to Sony and Microsoft activities. Middle East and Africa region is expected witness steady growth owing to steady consumption of smartphones in the region.

The global digital gaming market is further classified on the basis of region as follows: