The global dengue vaccine market is segmented by regions into North America, Latin America, Europe, Asia Pacific and Middle East and Africa. Among these regions, the market of Asia Pacific dengue vaccine is driven majorly by China and India, where China is anticipated to hold the largest market share of around 30% share in the year 2027. Several outbreaks of dengue fever observed in the region over the years on the back of the region having a tropical environment, has raised the necessity of the government to increasingly focus on acquiring dengue vaccines in large quantity to address the massive population, which is majorly dominated by the two nations around the globe. 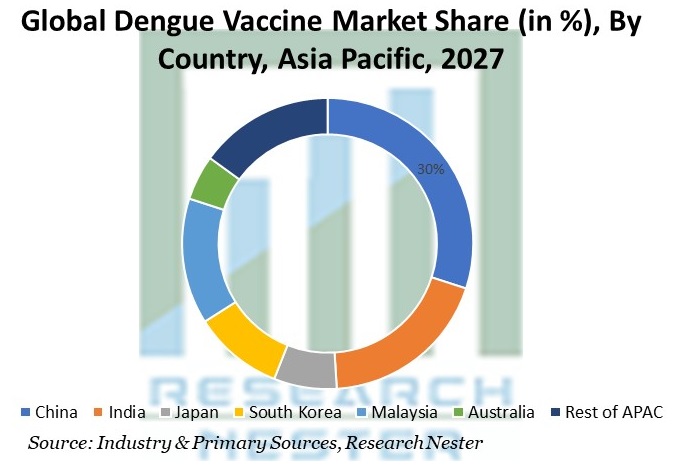 The global dengue vaccine market has been segmented on the basis of age group into <6 years, 6-12 years and >12 years. >12 years segment is anticipated to hold the largest market share of around 54% in the year 2027 in the global dengue vaccine market. Additionally, >12 years segment is anticipated to cross nearly USD 680 million by the end of 2027 by growing at a significant CAGR over the forecast period. Further, the <6 years segment is estimated to grow with the highest CAGR of around 22% over the forecast period. 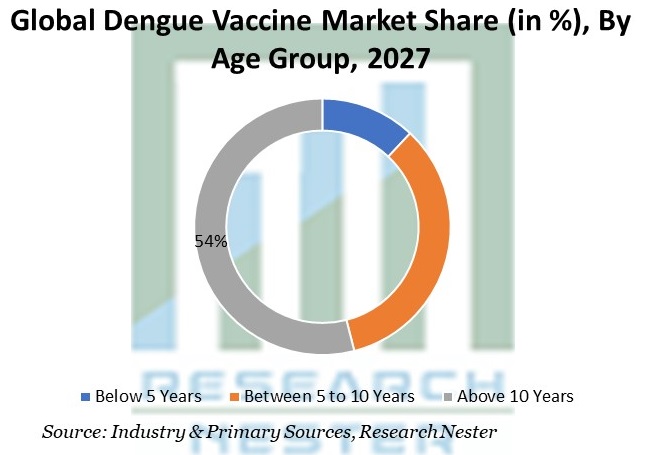 The global dengue vaccine market is segmented by end user into hospital, clinics, government establishments, private establishments, ambulatory surgical centers and others. The clinics segment registered a significant market share along with a value of around USD 48 million in the year 2018. Clinics are the healthcare facilities which primarily focuses on the care of outpatients. Operated and managed both in private and in public sectors, clinics usually cover the primary healthcare needs of populations in the local communities. On the other hand, the hospital segment is anticipated to grow with a CAGR of around 22% during the forecast period. A hospital is a healthcare institution that provides treatment to patients with a specialized team or medical and nursing staffs. Hospitals are also equipped with medical equipment that are used to treat the patients.

According to the estimations of the World Health Organization (WHO), around 100-400 million dengue infections occur each year and that half of the world’s population is now at risk. Further, it also stated that over the last two decades, the number of dengue cases reported to the organization has increased over fifteen-fold, reaching up to 3,312,040 numbers in the year 2015.

The alarming increase in the number of dengue cases around the world is a major concern for individuals as well as the government of the nations. Moreover, due to the unavailability of the vaccine for the disease during its outbreak, several numbers of cases have been self-managed resulting in the actual number of dengue cases being under-reported. Apparently, several developed and under-developed nations around the globe are also prone to this disease on the back of unplanned and uncontrolled urbanization, poor management and others. The increasing concern for the spread of dengue virus around the world along with huge government funding for the manufacturing of the dengue vaccine, which led to greater affordability of the vaccine, are some of the factors anticipated to drive the growth of the global dengue vaccine market.

Lack of awareness of the dengue vaccine as well as for the availability of the vaccine is anticipated to hamper the growth of the global dengue vaccine market.

What are the major factors driving the growth of the Dengue Vaccine market?

Increasing incidences of dengue fever worldwide along with the need to vaccinate the infected individuals are some of the major factors that are driving the growth of the market.

What would be the CAGR of Dengue Vaccine market over the forecast period?

Which region will provide more business opportunities for growth of Dengue Vaccine market in future?

The market in Latin America is anticipated to provide more business opportunities in the future.

Who are the major players dominating the Dengue Vaccine market?

What are the major segments in the global dengue vaccine market?

The market is majorly segmented by age group, by end user and by region.

What can be the significant growth opportunity for the age group segment in the global dengue vaccine market?

The >12 years segment, which is a sub-segment of the age group segment, is anticipated to hold the largest market share of around 54% in the year 2027.

Lack of awareness for the availability of dengue vaccines is one of the major factors anticipated to act as a barrier towards the growth of the global dengue vaccine market.

Chapter 15 Global Strategy of The Companies