BPA, Bisphenol A is an industrial chemical which has wide array of applications in many commercial products, including food containers and hygiene products. It is an important chemical material used in epoxy resins and polycarbonate plastic cans. This chemical is primarily used as coating in can linings. However, associated health issues concerning the use of BPA cans, have led to a gradual shift toward the adoption of non-BPA cans.

The global demand for the BPA cans are increasing on account of its increasing applications in food and beverage industry. On the other hand, rising consumer awareness in tandem with the stringent government regulations pertaining to the use of BPA cans are also some of the major factors anticipated to propel the market growth over the forecast period. Over the years, the manufacturing of the BPA cans has witnessed a significant decrease. As per the Can Manufacturers Institution (CMI) survey, including can lining and can makers companies, at least 90% of cans have already been replaced which initially contained BPA linings as of the current scenario. Nowadays, food linings are primarily made of polyester and acrylic. According to the survey results, it has also been confirmed that these materials are extensively tested and before being sold in the market are assessed by the regulatory agencies.

Furthermore, a number of manufacturers have opted certain measures in order to increase their brand loyalty and have started to inculcate the adoption of BPA cans for the storage of their food and beverage products. Some of such companies include, Amy’s, Bionaturae, Crown Prince Seafood, Eden Foods, Farmer’s Market, Muir Glen, Westbrae Natural, and Wild Planet Foods. 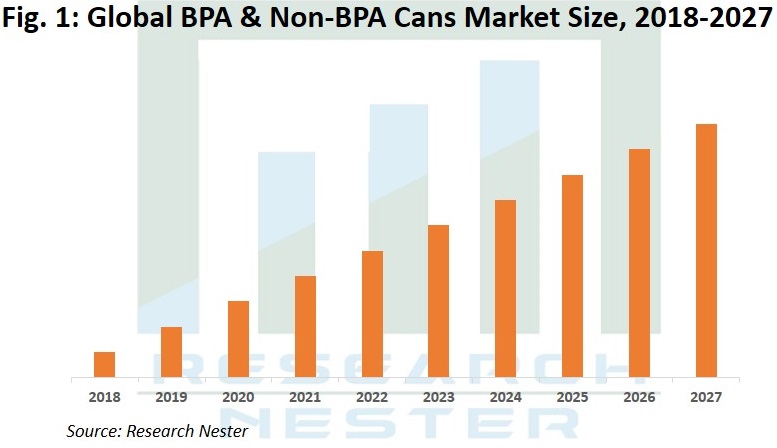 The global BPA & Non-BPA Cans market is segmented region wise into 5 major regions comprising North America, Europe, Asia Pacific, Latin America and Middle East & Africa. Among these regions, North America is estimated to hold largest market share on the back of the growing demand concerning the consumption of ready to eat foods coupled with the highest consumption of packaging across the region. 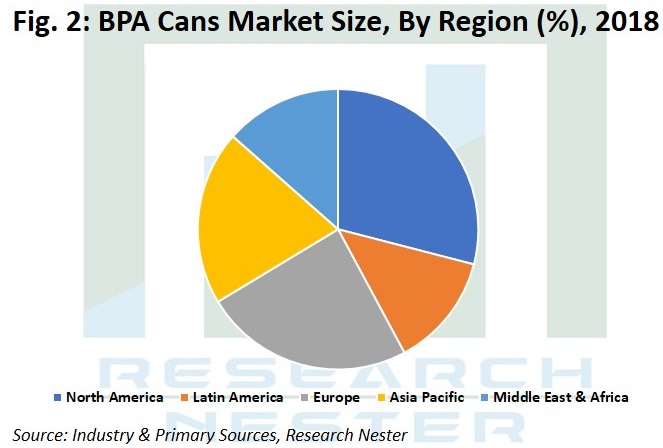 The global BPA & Non-BPA Cans market is bifurcated by can type into BPA and non-BPA cans. Further, BPA and non-BPA cans are bifurcated into 2-piece, 3-piece, and other cans. For the BPA cans 2-piece cans hold the largest market share of 44.24% in 2018 and is expected to reach a CAGR of 4.24% by 2027. Similarly, for the non-BPA cans, 2-piece cans holds the largest market share of 49.24% in 2018, however, the others segment is anticipated to have the fastest growth and reach a CAGR of 5.40% by 2027. The non-BPA cans are further bifurcated by coating-type into polyolefin coating, soy-based epoxy coating, tetramethyl bisphenol coating, and others.

The global BPA & Non-BPA Cans market is segmented on the lines of material-type into aluminum, steel, plastic, and others, out of which the aluminum segment held the largest market size in 2018 for both BPA and non-BPA cans.

The global BPA & Non-BPA Cans market on the basis of shape is segmented into cuboid-shaped cans, cylindrical cans, and others. Among these segments, the cylindrical cans segment held the highest market shares in 2018 for both, BPA and non-BPA cans.

On the basis of application, the market is segmented into food, beverage, personal care and homecare, pharmaceuticals, and others. For both the cans, the food segment held the largest market share in 2018.

The growth of BPA & non-BPA cans is significantly driven by the strong packaging demand from the global food & beverage industry. Some of the macro parameters concerning the growth of the same in food and beverage industry, include its rising manufacturing on account of increasing population and rise in personal disposable income of the consumers. Another major growth factor includes the growing consumption of alcoholic & non-alcoholic beverages in several developing countries. Moreover, various characteristics exhibited by the BPA cans such as, as heat and chemical resistance, strength at low temperature, and simple processing ability are also expected to propel the market growth concerning the BPA cans. However, eco-friendly properties of non-BPA cans, as less amount of fossil fuels and toxins are released into the atmosphere during their manufacturing process coupled with growing health awareness among consumers are among the major factor which are anticipated to foster the market growth concerning the non-BPA cans.

One of the major restraining factors for the growth of global BPA and non-BPA cans market is the availability of substitutes at reasonable prices. In addition, cost concerning the manufacturing of non-BPA cans are high as compared to flexible packaging material. Furthermore, stringent regulations pertaining to the use of the BPA cans are also expected to hamper the market growth over the forecast period.

Ball Corporation is a multinational company, which provides metal packaging solutions to various industries such as food & beverages, aerospace, and others. It also provides services to the commercial and governmental customers. In February 2018 Ball Corporation announced their expansion plan concerning the manufacturing of a one-line beverage can, in order to expand their product portfolio.

Additionally, few players are increasingly adopting innovative ways to establish themselves in the fragmented and competitive market through introduction of advanced packaging solutions concerning the cans. Concurrently, new players in the market are also adopting the similar strategies in order to increase their product portfolio and gain a global prevalence in the market.