Introduction To Bioethanol As A Biofuel

Bioethanol, chemically known as Ethanol or Ethyl Alcohol (C2H5OH) is a clear colorless liquid, which is biodegradable in its nature, low in toxicity and causes little environmental pollution if spilt. It burns to produce carbon dioxide (CO2) and water (H2O). Bioethanol as a biofuel contains high octane and it has replaced lead in petrol as an octane enhancer.

Bioethanol is produced using feedstock which are high in sugar (sugar cane, sugar beet and molasses among others) and starch (corn, wheat and grains among others). Sugar (cellulose and hemi-cellulose) is extracted from the plant cell walls by the process of fermentation, which is then hydrolyzed by enzymes and later on fermented to produce bioethanol.

The market of bioethanol as a biofuel production market is observing vibrant growth on account of rising environmental concerns among nations, which is shifting their demand for the adoption of renewable energy sources from that of fossil fuels. Furthermore, there is a growing demand among nations around the globe, for generating alternative sources of energy and maintaining pace with the proposed Sustainable Development Goals (SDGs) of the United Nations Development Program. All of these factors are anticipated to support the growth of the bioethanol as a biofuel market. 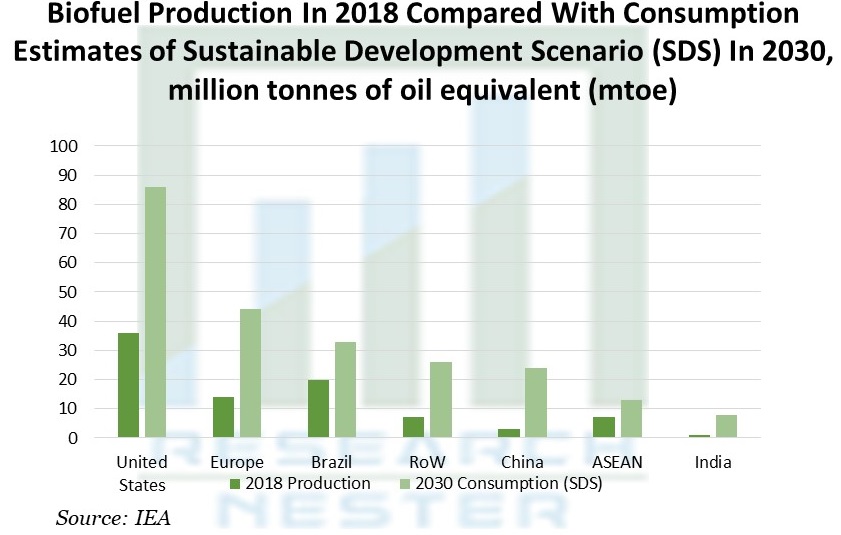 The market is anticipated to record robust CAGR throughout the forecast period, i.e. 2019-2027. The bioethanol as a biofuel production market is segmented by end-user into transportation, power generation and residential. Upsurge in sales of vehicles around the globe, owing to growing disposable income, is driving the growth of the transportation segment for the bioethanol as a biofuel market. According to the International Organization of Motor Vehicle Manufacturers (OICA), registrations or sales of new vehicles grew from 65 million numbers in 2005 to 95 million numbers in 2018 around the globe. 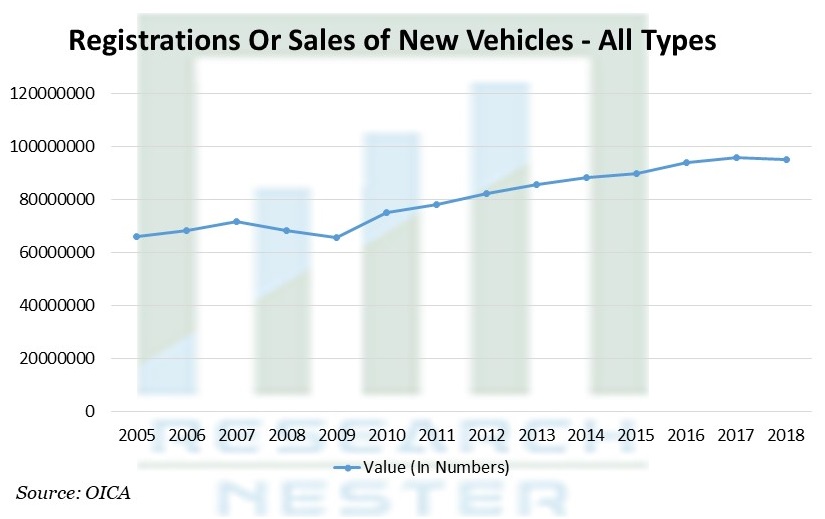 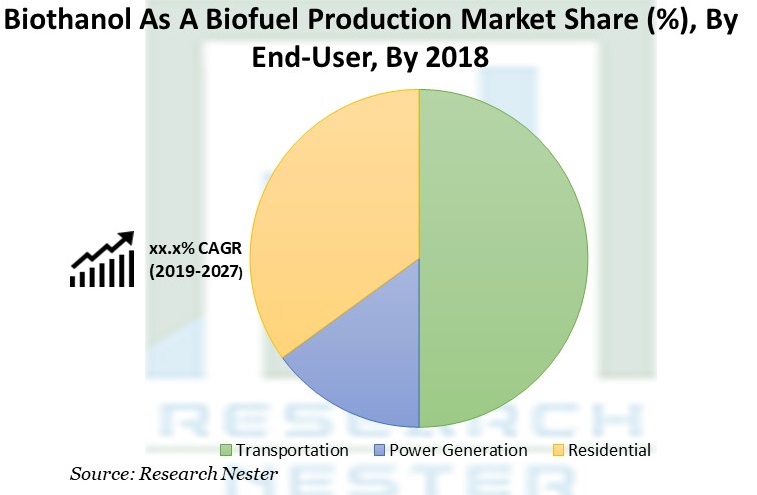 Consumption of energy in the recent era have grown multifold owing to increasing population and growing urbanization. Upsurge in sales of vehicle around the globe have raised fuel consumption. To mitigate the demand, company owners are in regular search for high productive wells to produce fossil fuel.

Enterprises are also shifting their focus towards production of biofuels, such as bioethanol and biodiesel, to keep pace with target indicator 7.2 of the Sustainable Development Goals (SDGs). SDGs are the global targets adopted by all United Nations Member States in 2015 as a universal call to action, to end poverty, protect the planet and ensure that all people enjoy peace and prosperity by 2030.

According to the statistics provided by International Environmental Agency (IEA), production of transport biofuel expanded 7% Y-O-Y in 2018, which falls short of the sustained 10% output growth per year needed until 2030, to align with the Sustainable Development Scenario (SDS).

The survey report also provides forecasts for current trend of production growth versus growth required to meet SDS in 2030: 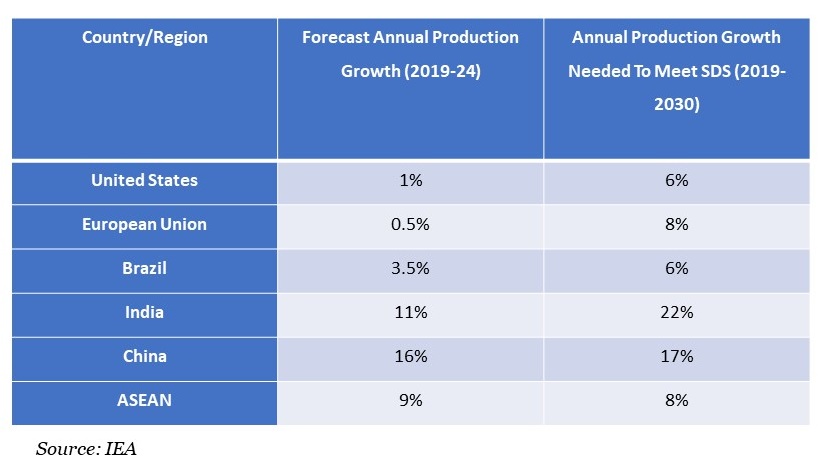 The statistics thus form an alarming concern for enterprises around the globe on the importance of production of bioethanol as a biofuel.

In a survey report provided by Eurostat, which is the Directorate-General of European Commission located in Luxembourg, stated that the indigenous production of bioethanol across twenty eight European countries has increased from 121.11 thousand tonnes in 2003 to 3,528.12 thousand tonnes in 2017, growing at an average annual rate of 39.40%.

Regulatory bodies such as Environment Protection Agency (EPA), Renewable Energy Directive (EU RED), Renewable Fuel Standard (EPA RFS) and others have updated their policies and have initiated blending mandates for use of bioethanol with conventional fuels in order to lower emissions of greenhouse gases (GHG) and help in the production of clean air. Support from the government of various economies by setting goals and targets as well as providing fiscal and investment support, are some of the factors estimated to support the growth of the bioethanol as a biofuel production market during the forecast period.

Farmer’s Willingness To Choose Between Food Vs. Fuel

The production of bioethanol as a biofuel is dependent on the availability and supply of feedstock. Cultivation of these feedstock depend on factors, such as, availability of large farmable land and the type of crop suitable to grow in the area. It is a challenging debate for farmers to decide between productions of food and feed stock crops. Any unbalance between the two production cycles will lead to the shortage of total food stock across the globe.

Furthermore, there is shortage of water for the purpose of irrigation, which is challenging farmers to use efficiently between productions of crop and feedstock. All of these factors are anticipated to act as a barrier to the growth of the bioethanol as a biofuel production market during the forecast period.

Our in-depth analysis of the bioethanol as a biofuel production market includes the following segments:

On the basis of regional analysis, the bioethanol as a biofuel production market is segmented into five major regions including North America, Europe, Asia Pacific, Latin America and Middle East & Africa region.

North America is expected to have largest market share on the back of high consumption of fuel. The statistics provided by Center For Sustainable Systems, University of Michigan, stated that 10% of U.S. vehicle fuel consumption (by volume) constituted ethanol and over 98% of U.S. gasoline contained ethanol. Moreover, rapidly growing automotive industry is estimated to fuel the growth of the bioethanol as a biofuel market in the region.

Further, Latin America, Europe and Asia-Pacific are expected to gain significant market share on account of availability of arable and fertile agricultural lands for the production of bioethanol as a biofuel. 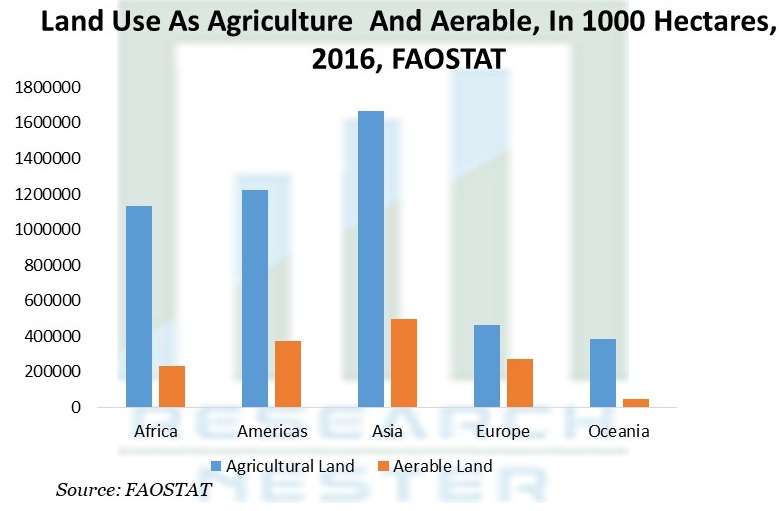 The bioethanol as a biofuel production market is further classified on the basis of region as follows: