Automotive Gesture Recognition Systems (AGRS) are advanced systems which enhances control and safety of vehicles. These systems can incorporate human touch or other gestures to get initiated, and perform the desired action. Increasing safety regulations, and efforts to reduce driver distraction are some of the factors to be considered while developing and installing an automotive gesture recognition system.

This system captures command movements from the hand, finger gestures or iris recognition, and face recognition. Its technology operates with the help of camera and sensor device where camera feeds image data to the sensing device, and with the help of an infrared sensor, it calculates the depth of the movement. The software in the computer identifies the gesture and tries to find a match for that gesture in its predefined gestures library. On detection of the match in the library, a command related to that gesture is executed. This technology is used in various industries including cars where automotive recognition systems can be used to control windows, doors, music system, or the air conditioner.

Hand gesture recognition is one of the advanced research fields, which provides a way for Human-Machine Interaction (HMI) and Human-Computer Interaction (HCI).

Rise in technology-focused lifestyle and development of tracking technology are the major factors that are driving the growth of automotive gesture recognition system market. In addition, there is an increase in awareness about driver safety and regulations in automobile industry where the advancement of individual vehicle safety and intelligence is assisted by smart interaction with other vehicles and real time data servers. This vehicle management development enhances fuel efficient driving and improved driver awareness. Furthermore, prompt vehicle management system minimizes the utilization costs and boost the in-car entertainment applications, thus supporting the overall growth of the market.

Currently, the automotive gesture recognition market is observing notable growth owing to increasing disposable income of the consumers and rising automation applications across automobile industry. Additionally, it is expected from many countries to mandate the incorporation of gesture controls in passenger automotive vehicles, on the backdrop of increasing concern over driver safety. Manufacturers are developing varying economies of scale to acquire and assimilate gesture recognition systems in their mid-segment vehicle models. The automotive gesture recognition market is anticipated to record a CAGR of around 32% over the forecast period i.e. 2019-2027. CLICK TO DOWNLOAD FREE SAMPLE

North America is anticipated to be the global leader in terms of demand for gesture recognition systems. The market in the region has incorporated some of the most advanced technologies in vehicle automation, and offers wide-scale technological adoption rate. The existence of several established vehicle manufacturers offering high-end vehicle models with enhanced automotive gesture recognition systems is estimated to drive the market growth in this region.

The market in Europe is estimated to witness significant growth owing to the presence of most prominent global car manufacturers that additionally cater to the huge demand for gesture recognition systems. For instance, many passenger cars and buses in the Europe region are equipped with this technology, adding significantly to driver and vehicle safety. For instance, in 2016, BMW announced to develop a gesture control-based UI called AirTouch that utilizes sensors embedded in the vehicle’s dash near the main infotainment display analyzing 3D hand movements which enabled driver interaction with the infotainment system without touching the screen.

There is an increasing demand for cars in Asia Pacific region which can be attributed to rising disposable income and growing demand for cars with high end features. The significant demand for automotive gesture recognition systems is anticipated to come from China and India based automobile manufacturers, in an attempt to modify their vehicle models towards global standards. Furthermore, growing government initiatives with a target to promote usage of electric vehicles are anticipated to boost the growth of the market in Asia-Pacific region. 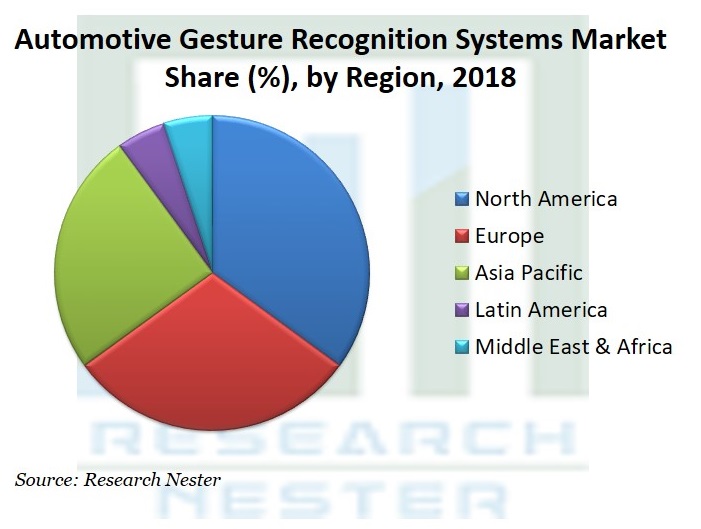 The global automotive gesture recognition system market is further classified on the basis of region as follows:

Autonomous cars extensively use sensors and systems with highly complex software and hardware for accurate guiding and minimal human assistance. Vehicle manufacturers are integrating Advanced Driver Assistance Systems (ADAS) to detect external inputs and direct the vehicle safely and accurately. In addition, advancements in the system ensuring prompt functioning, lag minimization and reducing touch latency to diminish driver distraction along with growing awareness and regulations for driver safety are estimated to significantly support the growth of the market in upcoming years.

Moreover, system responsiveness conveying quick warnings along with executing fast actions in real time coupled with superior probability and lower error rate is influencing the demand for these systems, further supporting the growth of the market.

The market is volatile and is experiencing an intense competition. Increased costs of developing and integrating gesture recognition systems in automobiles are some of the restraining factors that are estimated to affect the growth of the market.