Carbon fiber, also known as graphite fiber, is a polymer composed majorly of carbon atoms. It is a thin strand-like structure which is stronger than steel and lighter in weight, making it an important component of the manufacturing industry. This fiber is 5-10 micrometers in diameter. The atoms are tightly interlinked with each other, giving the fiber its high strength and other useful properties.

It is popular owing to its exceptional properties such as heat resistance, high tensile strength, stiffness, high chemical resistance, low thermal expansion and tolerance to high temperatures. Carbon fiber does not corrode, which gives it an edge over the usage of aluminum in the aerospace industry.

Carbon fiber is used in industries such as aerospace, transportation, electronics, marine and sports industry.

The global aerospace carbon fiber market is mainly driven by the growing demand for lightweight and fuel efficient aircrafts. An increase in the air traffic along with the development of new airlines also gives a boost to growth of the market. The aerospace carbon fiber market is anticipated to record a CAGR of around 12% over the forecast period, i.e., 2019-2027 and is estimated to attain market size of around USD 800 million by the end of the 2027.

The market is segmented by aircraft type into commercial, military and rotorcrafts, out of which, the commercial aircrafts segment is estimated to hold leading stance in the global aerospace carbon fiber market on account of an increase in the production of these aircrafts. The usage of commercial fixed-wing aircrafts is anticipated to grow as majority of people prefer to travel by air nowadays. Another factor leading to expansion of this market is the growing advancement in the aviation industry which leads to the development of new inventions as per the customer demand. CLICK TO DOWNLOAD FREE SAMPLE 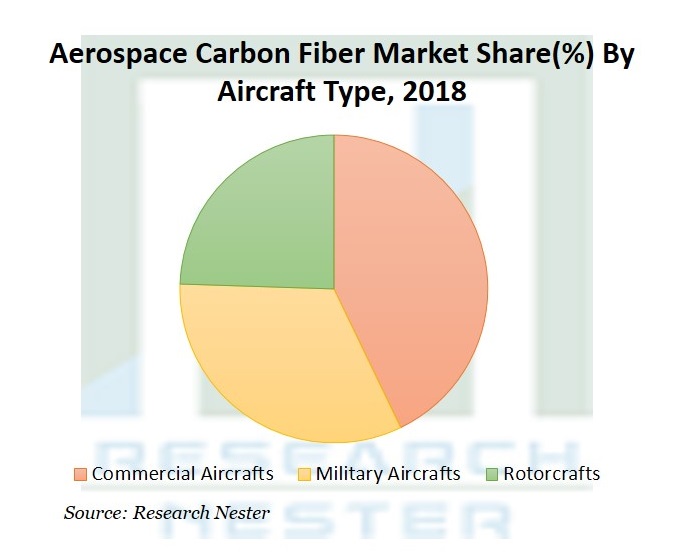 With increasing technological advancements, the aviation industry is anticipated to grow at a fast pace in the coming years. The rise in demand for commercial and military aircrafts has led to development of new aircrafts at a faster rate. Carbon fibers are used in the production of various parts of these aircraft models including the interior and exterior components. These are some of the major factors that are anticipated to significantly support the growth of the market in upcoming years.

The market is anticipated to witness significant growth on the back of higher demand of carbon fiber in the aviation industry. This can be attributed to its lightweight properties which also results in a reduced consumption of fuel.

Since carbon fibers cannot be repaired, they need to be replaced every time the structure gets broken or cracked, which makes the material very expensive to use. Additionally, they are expensive and their tensile strength is reduced upon recycling. These factors are estimated to restrain the growth of the market over the forecast period.

The market in Asia-Pacific region is expected to hold highest shares in the aerospace carbon fiber market over the forecast period owing to the growth in the aerospace industry in regions such as China, Japan and India. The increasing air traffic and easy availability of raw materials in the Asia-Pacific region is anticipated to lead to a rapid growth of this industry.

The growing demand for lightweight raw materials including carbon fibers in the aerospace industry in North America is expected to significantly boost the growth of the market in this region.

The global aerospace carbon fiber market is further classified on the basis of region as follows: