The growth of the global Gaucher disease market is thriving on the back of increasing incidences of Gaucher’s disease as well as the increasing focus of the pharmaceutical companies on introducing new products that cater to the treatment of Gaucher disease. Gaucher disease causes massive clinical heterogeneity with symptoms of painless splenomegaly, anemia or thrombocytopenia, bone pain, chronic fatigue and pathologic fractures and also contributes to easy incidence of bruising and bleeding through the nose. Initially, Gaucher disease was treated in patients by the use of recombinant enzyme imiglucerase which was effective in retrograding the visceral and hematologic symptoms of the disease. With advancements in research and development, the scope for medicine with enhanced treating capabilities is growing significantly. Such factors are considered to promote significantly towards the growth of the global Gaucher disease market.

The global Gaucher disease market is segmented by regions into |North America, Latin America, Europe, Asia Pacific and Middle East and Africa. Among these regions, the market of Asia Pacific Gaucher disease is driven primarily by nations such as China, India and Japan, where China held the dominant market share of around 41% in the year 2018. Presence of the world’s largest population in the nation, which also raises the possibility of being infected by the Gaucher’s disease and the raising concern amongst the population to get vaccinated from such disease are some of the factors that predicts a significant growth of Gaucher disease market in upcoming years. Additionally, Asia Pacific is expected to expand by observing a growth rate of around 1.30x during the assessment period, which in turn is estimated to have a positive effect on the demand for global Gaucher disease treatment in the long run. 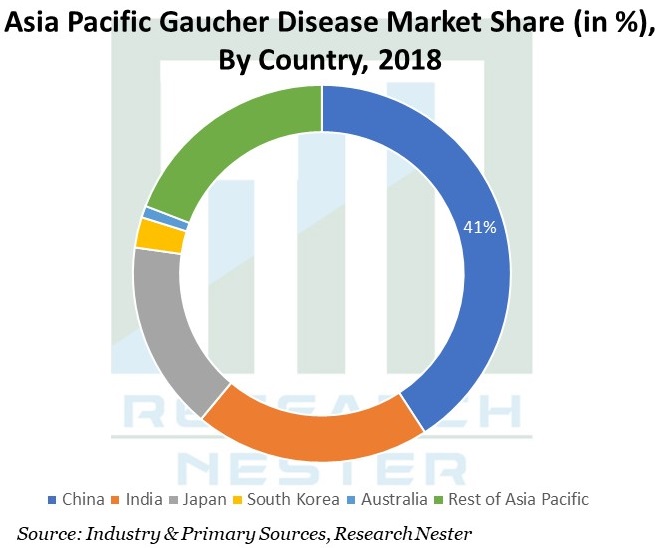 The global Gaucher disease market has been segmented on the basis of clinical type into type I, type II and type III. The type I segment with around 80% share in the year 2018, occupies the largest market of Gaucher disease across the globe. Additionally, the type I segment is anticipated to cross a value of around USD 1500 million by the end of 2026 and is anticipated to flourish at a CAGR of around 3% over the forecast period. Further, the type III segment is estimated to grow with the highest CAGR of around 4% over the forecast period. 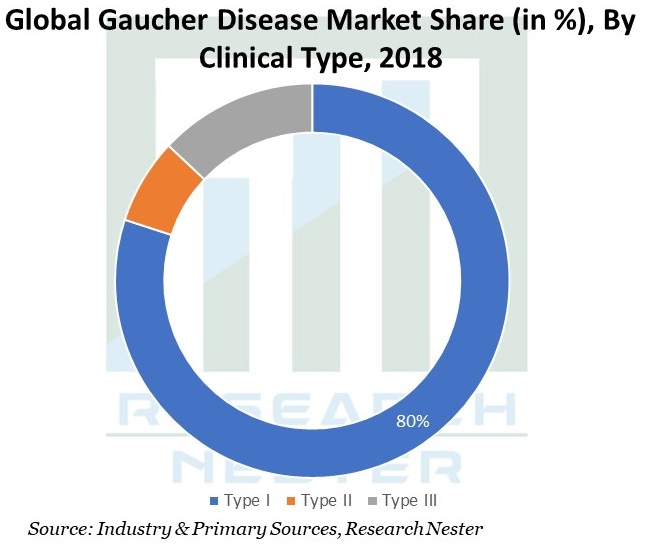 There is an increasing concern for the rising incidences of Gaucher disease amongst people around the globe as the risk of developing the disease increases with consanguinity in the family. According to the statistics by the National Organization for Rare Disorders (NORD), around 6000 individuals have Gaucher disease in the United States alone. Although the disease is one of the most common genetic disorder amongst the Ashkenazic Jewish population, which forms about 75% of the world’s total Jewish population, yet the chances of gene mutation or transfer of disease to other individuals often raises the concern to treat these rare diseases in an important manner. Additionally, rising per capita expenditure on healthcare by several nations around the globe along with growing support and funding of the government of nations are some of the factors anticipated to drive the growth of the global Gaucher disease market.

The high cost associated with the treatment of the disease and stringent norms of the government of several nations for the use of drugs and treatments of the disease are some of the factors anticipated to impact negatively towards the growth of the global Gaucher disease market.

What are the major factors driving the growth of the Gaucher Disease market?

Increasing concern for the growing incidences of Gaucher disease amongst people around the globe is one of the major factors that is driving the growth of the market.

What would be the CAGR of Gaucher Disease Market over the forecast period?

Which region is currently holding dominating share in the Gaucher Disease market?

Which region will provide more business opportunities for growth of Gaucher Disease market in future?

The market in North America is anticipated to provide more business opportunities in the future.

Who are the major players dominating in the Gaucher Disease market?

What can be the significant growth opportunity for the clinical type segment in the market?

The type I segment, which is a sub-segment of the clinical type segment, held the largest market share of around 80% in the year 2018 is anticipated to show significant growth opportunity.

Concerns regarding high cost associated with the treatment of the disease and stringent norms of the government of several nations are some of the factors anticipated to act as a barrier towards the growth of the market.