The Europe waste recycling services market is estimated to garner a sizeable revenue and grow at a CAGR of ~6% over the forecast period, i.e., 2022 – 2030. The growth of the market can be attributed to the increasing consciousness among industries and consumers regarding the benefits of recycling wastes, and rapid surge in waste generation. According to the European Commission, in 2018, 5.2 tons of waste were generated per European Union inhabitant. Out of this, 38.5% waste were landfilled and 37.9% were recycled. Along with these, the waste recycling companies in Europe are investing heavily in plastic chemical recycling since the last few years. Manufacturers are expected to adopt advanced technologies to convert low quality plastic waste to brand new plastic products, which in turn is predicted to drive market growth in the upcoming years. Furthermore, increasing number of users who are connected to centralized wastewater treatment systems is projected to offer lucrative opportunities to the market growth in the near future. 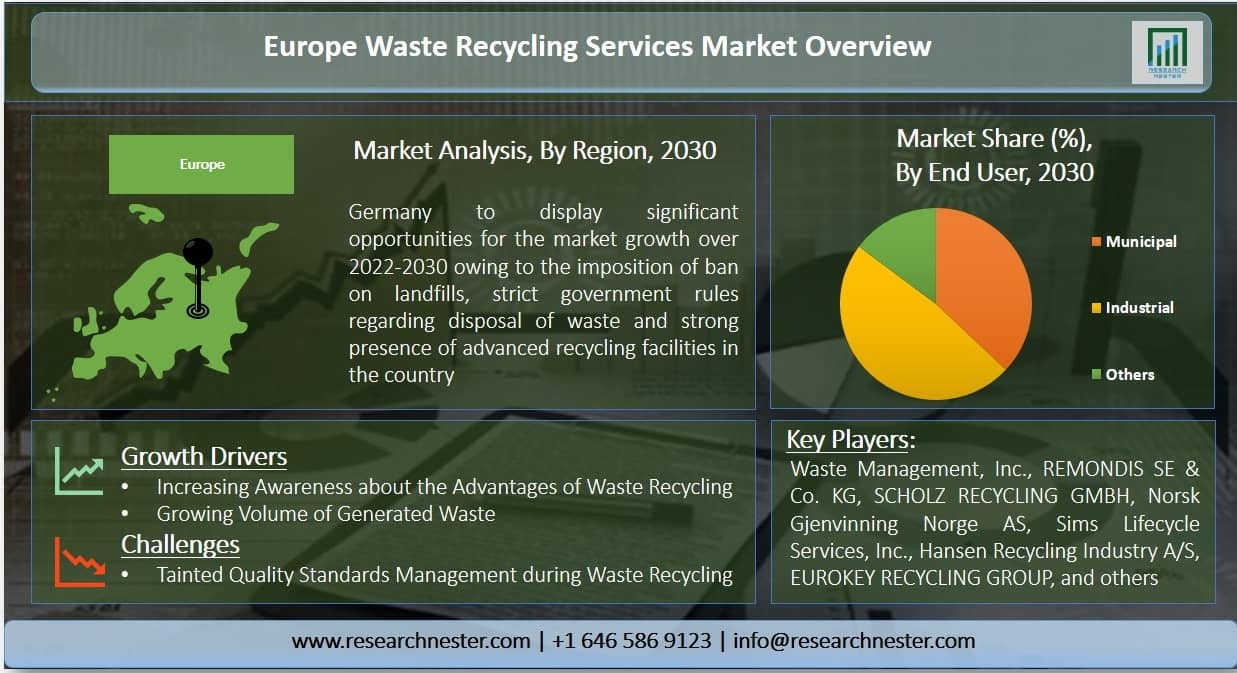 The market is segmented by product into plastics, paper & paperboard, metals, food, glass, electronic waste, and others, out of which, the paper & paperboard segment is anticipated to hold the largest share in the Europe waste recycling services market on account of the high consumption of pulp and paper, and growing paper waste recycling in the region. Along with this, the plastics segment is expected to witness the highest segment growth over the forecast period, which can be credited to the large volume of plastic waste in Europe. Another report by the European Commission depicts, from 2008 to 2018, paper and cardboard were the major packaging waste material in the EU amounting to 31.8 million tons of waste in 2018, followed by plastic which accounted for 14.8 million tons of waste in the same year.  Additionally, on the basis of end user, the industrial segment is predicted to gather the largest share in the coming years ascribing to the high recycling potential of waste generated from construction, manufacturing, mining and quarrying. CLICK TO DOWNLOAD SAMPLE REPORT

On the basis of geographical analysis, the Europe waste recycling services market is segmented into U.K., Germany, France, Italy, Spain, Hungary, Belgium, Netherlands & Luxembourg, NORDIC, Poland, Turkey, Russia, and the rest of Europe. The market in Germany is estimated to witness noteworthy growth over the forecast period on the back of stringent government regulations associated with waste disposal and imposition of ban on landfill of waste. Apart from these, presence of well-established recycling facilities is also expected to expand the market in this region. As per the European Environment Agency, 68% of municipal waste was recycled in Germany in 2017. Along with this, more than 70% of packaging waste was also recycled in the country during that year. Additionally, increasing awareness for converting waste-to-energy in the country is also expected to contribute to the market growth. Moreover, the market in the United Kingdom is anticipated to acquire the largest market share during the forecast period owing to the large generation of commercial and industrial waste in the country, coupled with increasing number of government initiatives to reduce waste and develop massive quantities of sustainable products.

1) What are the major factors driving the growth of the Europe waste recycling services market?

Ans: Growing consciousness regarding the benefits of waste recycling and increasing amount of waste generated are the major growth drivers for the market.

2) What would be the CAGR of Europe waste recycling services market over the forecast period?

3) What are the challenges affecting the Europe waste recycling services market growth?

Ans: Improper maintenance of quality standards during waste management is estimated to hamper the market growth.

5) Who are the major players dominating the Europe waste recycling services market?

7) What are the segments in the Europe waste recycling services market?

Ans: The market is segmented by product, end user, and by region.

8) Which segment captures the largest market size in the end user segment in the Europe waste recycling services market?

Ans: The industrial segment is anticipated to hold largest market size and is estimated to grow at a moderate CAGR over the forecast period and display significant growth opportunities.