Increasing consumer spending capacity for agricultural purposes, coupled with the numerous benefits associated with biochar and the growing government support for organic farming methods are some of the key opportunities that are anticipated to promote towards the growth of the Europe biochar market. The ability of biochar to provide essential nutrients and maintaining the health of livestock has created several opportunities for its consumption in livestock farming, including poultry farming, cattle farming, and meat production. On the other hand, stringent regulations on the non-therapeutic use of antibiotics, particularly within the livestock sector, is anticipated to create significant adoption opportunities for biochar, as it serves to prevent infections and effectively conveys the growth and performance benefits when used as a feed additive or supplement. As several countries in Europe have high dependency on animal husbandry, such a factor is anticipated to create major revenue generation opportunities for the market players in recent times.

The Europe biochar market registered a value of USD 368.40 million in the year 2019 and is anticipated to achieve a CAGR of 14.38% during the forecast period, i.e. 2021-2028. Additionally, the market is expected to attain an incremental $ opportunity of USD 43.1 million in the year 2020 as compared to the previous year and further grow by 2.56x to gain an absolute $ opportunity of USD 720.77 million during the forecast period. The Europe biochar market is further anticipated to reach a value of USD 1182.42 million by the end of 2028.

The Europe biochar market has been segmented on the basis of gasification into gasification, pyrolysis, hydrothermal carbonization and depolymerization. The pyrolysis segment registered the largest market share of 76.37% along with a value of USD 281.36 million in the year 2019 and is expected to gain an incremental $ opportunity of USD 33.83 million in the year 2020 as compared to the previous year. The pyrolysis gasification process is used for the thermal decomposition of organic materials at high temperature in the absence of oxygen. It is usually a very simple, and inexpensive method. As a result, this method is highly preferred in the biochar production. Additionally, this method reduces the waste going to the landfills and further reduces greenhouse gas emissions, which in turn is increasing its acceptance among the customers. Moreover, the high temperature used in the pyrolysis process enhances the production of biochar with highly developed surface area, high porosity as well as pH. 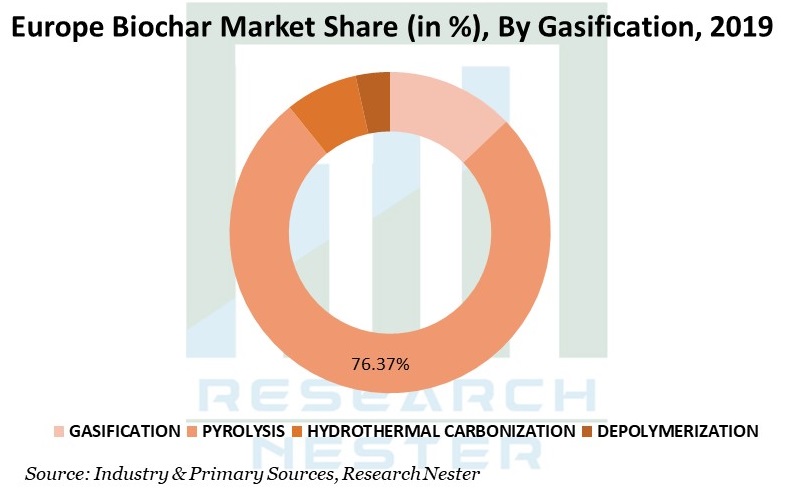 Increasing consumer spending capacity and the growing health consciousness are some of the factors that are promoting the demand for organic food. In organic farming, biochar is widely used in soil amendment process to reduce pollutants and toxic elements, and to maintain moisture level, soil leeching, and fertilizer run off. Moreover, it is also used as a viable substitute for boosting soil’s carbon content, that eventually results in enhancing the soil fertility. Biochar is also used for livestock farming as it provides essential nutrients and maintains the health of livestock. It is also widely used in mixed farming, zero tillage farming, biodynamic agriculture, and water treatment processes, which is also anticipated to drive the growth of the Europe biochar market during the forecast period.

Implementation of stringent government initiatives is anticipated to contribute to the spreading awareness about biochar and its benefits among the end-users of biochar. International Biochar Initiative Organization supports the growth of the market by providing a building collaboration between market players, creating environmental and ethical standards, and finding a cost-effective system. Moreover, the EU Commission, which is the regulatory authority governing the biochar market, has made regulations related to the use of the product in agricultural production and waste management. Various new rules and regulations has been released by the EU commission regarding production and consumption of the product. As the product is still into the preliminary stage, there are huge opportunities for development of blended products to grow in future. Such factors are anticipated to drive the growth of the Europe biochar market in the coming years.

Lack of Awareness for Biochar

Implementation of biochar systems requires a highly location-specific understanding of consumers and their needs, values, and expectations. According to the survey by GreenFacts, the lack of awareness of biochar and a need for education and demonstration projects, extra labour required to operate slash-and-char systems and gather dispersed feed-stock along with restricted availability of biochar production technologies and environmental concerns regarding changing resource use patterns are some of the factors anticipated to pose a high degree of threat for the Europe biochar market.

What are the major factors driving the growth of the Europe Biochar market?

Increasing applications of biochar is one of the major factors that is driving the growth of the market.

What would be the CAGR of Europe Biochar Market over the forecast period?

Who are the major players dominating in the Europe Biochar market?

What are the major segments in the Europe biochar market?

The market is majorly segmented by process, feedstock, carbon content and by application.

What can be the significant growth opportunity for the gasification segment in the Europe biochar market?

The pyrolysis segment, which is a sub-segment of the gasification segment, held the largest market share of 76.37% in the year 2019 and is anticipated to display significant growth opportunity.

Concerns regarding the high cost of biochar is one of the major factors anticipated to act as a barrier towards the growth of the Europe biochar market.