Air freshener is a consumer product that is used for covering up any form of odour emission and are mostly used in various indoor spaces in public that can include hotel lobbies, automobile dealer showrooms, in addition to being used at homes. The ingredients that are contained in air freshener are fragrances, preservatives, including solvents such as mineral oil apart from other glycol ethers. The presence of a range of fragrances, including essential oils in many air fresheners is common.

The Europe air freshener market is predicted to grow at a CAGR of 3.86% over the forecast period, i.e., 2018-2027. The growth of this market is anticipated to rise significantly, on account of factors such as growth in popularity of natural air fresheners which cause lower levels of allergic reaction, apart from growing concerns on air quality and rise in demand for utilizing air fresheners commercially. Additionally, growing disposable incomes of the population as well as vehicle sales in the European region are anticipated to raise the demand for air fresheners over the next few years. Moreover, the rising public attention that has been gained on account of the severe impact on health of individuals is anticipated to boost the growth of the market over the next few years. According to EPA, poor indoor air quality could contribute to occurrence of various diseases such as asthma and other health problems due to high exposure levels of individuals from such pollutants.

The Europe air freshener market that was valued at USD 3253.7 million in the year 2018 is estimated to register a value of USD 4566.2 million by 2027. The market in Germany is projected to occupy the highest market share of 25.10% by end of forecast period. The market in United Kingdom is expected to closely follow behind with a market share of 22.45% by end of forecast period. The World Bank had stated in its report that the GDP of Germany that was valued at USD 51.03 trillion in the year 2017 had increased and reached a value of USD 54.20 trillion by 2018. Moreover, other factors such as rise in vehicle registrations in countries such as Germany, France, United Kingdom and Italy are anticipated to raise the demand for air fresheners as well as boost the growth of the market over the forecast period. CLICK TO DOWNLOAD SAMPLE REPORT 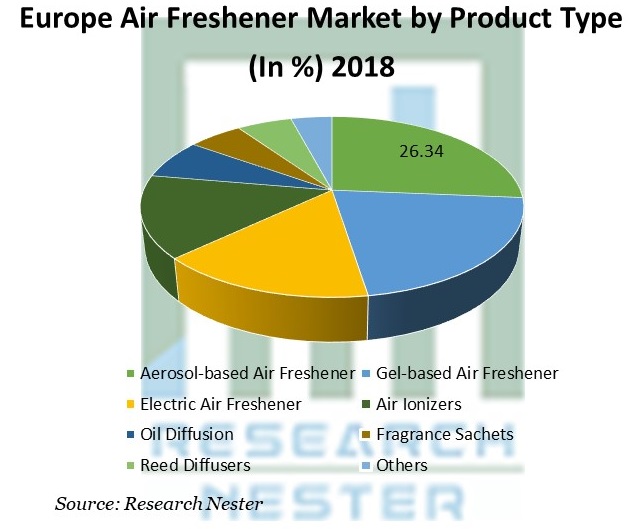 On the basis of distribution channel, the market is further segmented into offline and online. The offline segment is anticipated to hold the largest market share over the forecast period. However, online segment is predicted to register a significant growth rate over the forecast period, owing to increasing number of users conducting their transactions of purchasing products through the online mode. 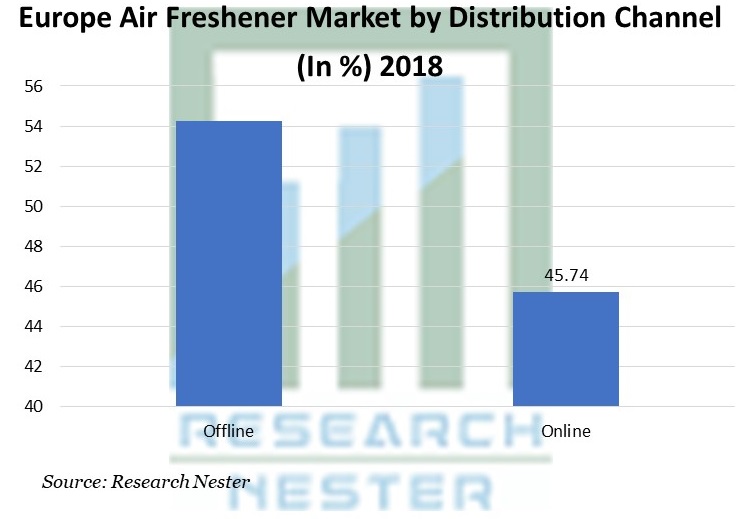 The end user segment comprises of residential, commercial and automotive segments. The residential segment is estimated to occupy the largest market share over the forecast period, as these air fresheners can help cover up the odour that might be present and make them smell better, which is mainly due to lower ventilation levels that might be present inside the homes that can cause obnoxious smells to be present inside the homes. 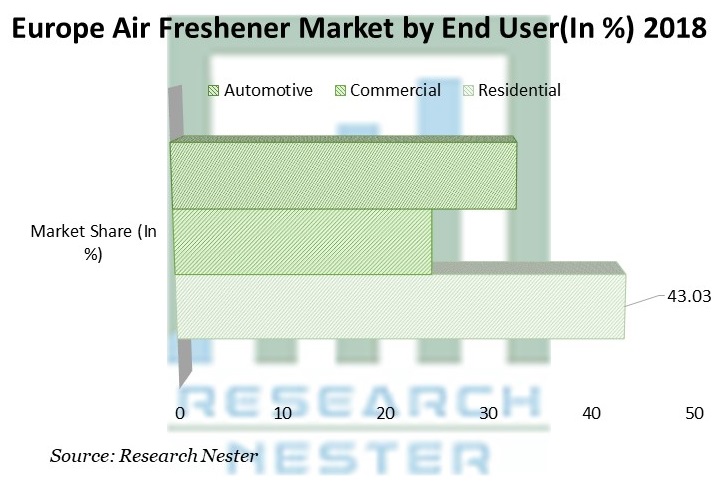 The European market has been witnessing a rise in demand among the consumers in the region for natural air fresheners, owing to various reasons such as these natural air fresheners are made with natural ingredients such as essential oils and various herbs that are considered to be safe for the users. Moreover, several artificial fresheners that are being offered for sale in the market offer a pleasant fragrance which can also cause problems for the health of individuals. Poor levels of indoor air quality arise as a result of greater usage of artificial air fresheners that can cause adverse health effects to the lungs and sometimes throats of individuals which can lead to asthma and other problems related to breathing in individuals. According to gov.uk, a public sector information website that has been created by the Cabinet Office of the United Kingdom Government, it had reported that Non-methane volatile organic compounds can cause vapour to be released from products such as air fresheners and has also undertaken to reduce emissions that arise from Non-methane volatile organic compounds by 39% by the year 2030. 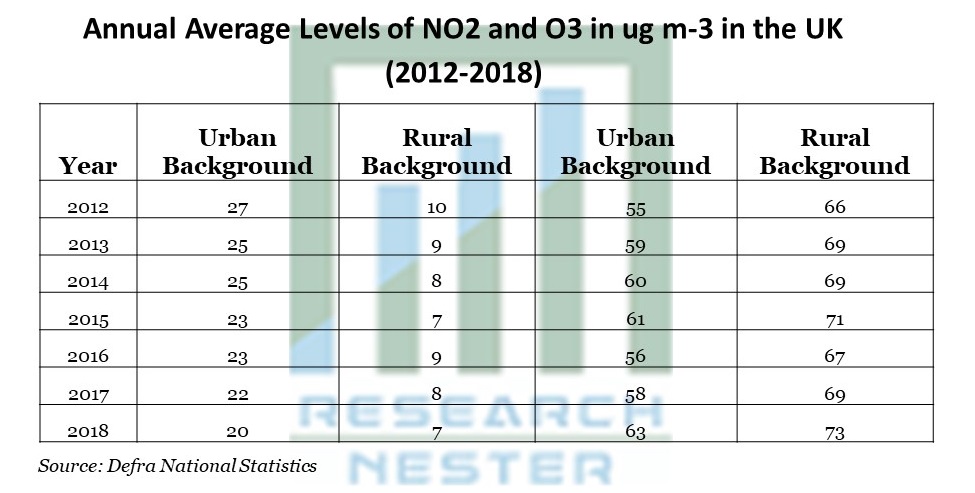 The standard of living of individuals in the European region have been growing over the last decade, with a greater number of individuals being in possession of disposable incomes who are attracted towards air fresheners that can provide good fragrance in the places where they are being used. Additionally, the number of vehicles sold in the European region have been rising steadily, which has generated higher demand among the population in the region to consume air fresheners for their domestic use in vehicles that can release a fragrance by providing an aroma in a specified area, in addition to masking any form of odour that might be present in such area. According to European Automobile Manufacturers Association (ACEA), the passenger car registrations in the EU had remained stable last year, which is expected to fuel the demand for air fresheners among the population in the region over the next few years. 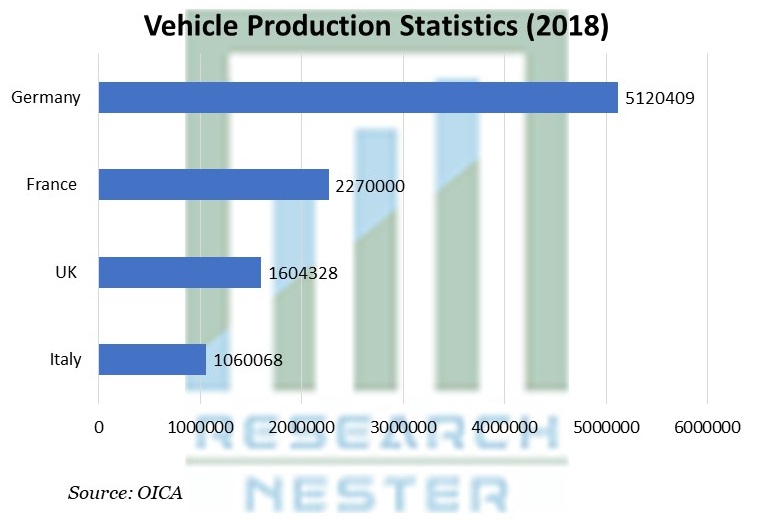 Many of the air fresheners that are being used also hold a diverse variety of fragrances, including essential oils. The chemicals that are found in fragrances emit a pleasant odour, although serious health risks are posed if there is considerable exposure for a longer period of time. Apart from that, the release of volatile organic compounds into the air, and higher chances of occurrence of indoor air pollution cannot be ruled out, even though they are preferred by individuals in the region are some of the factors that could limit the growth of the market.