Enzyme Converted Glucose Syrups refers to a type of syrups that are used as food sweeteners while adding volume and texture to the food. These syrups contain 9%-45% of varying quantity of glucose depending on the grade of food and are made from the conversion of starch to glucose with the help of enzymes. Starch sweeteners are economic and find their usage in many areas like beverages, dairy products and confectionary by attributing to its taste, color and texture.

Adding to its adapting quality, glucose syrups are considered for variety of products in food and beverages industry. Developed from starch, each has its own specific developing properties. Glucose syrups find their role mainly in confectionary like breakfast food, bakery products and brewing for their anti-crystallizing role and their sweetening capabilities while keeping the products appealing.

Glucose syrups are made from the hydrolysis of transforming corn starch into glucose by the enzymatic conversion allowing the manufacturing of products on a very extensive range with a wide span of sweetening power, texture and flavor.

The enzyme converted glucose syrup market is flourishing due to the rising calorie intake delivered by starch and its byproducts. The demand for glucose induced food products in food and beverages industries is increasing with respect to daily average calorie intake around the globe.

The demand of sweeteners claims to magnify in development of industry for soft drinks. The enzyme converted glucose syrups market is expected to expand at a CAGR of approximately 7% during the forecast period 2018-2027. Rising demand for energy boosters and advanced forms of glucose is one of the major factors which are driving the growth of enzyme converted glucose syrup markets across the globe.

Due to extensive use of starch crops for glucose production over the years, the consumption of starch crops is increasing which is outweighing all other industrial and food crops. There has been an estimate of more than 60% of the world’s daily average intake of glucose induced food products which is estimated to expand in the forecast period. 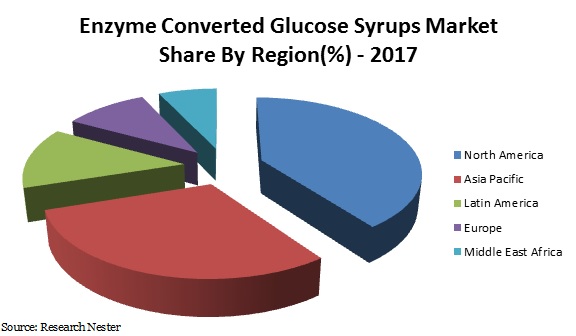 Globally, the United States dominated the production of enzyme converted glucose syrups market by 60% in year 2017 followed by Asia Pacific and Europe. The enzyme converted glucose syrup market was valued at approximately USD 4,200 million in 2017 and is expected to generate the revenue of around USD 4,990 million by the end of 2027. The fermentation industries across the globe are expected to bolster the demand of glucose syrups market during the forecast period i.e. 2018-2027 growing at a CAGR of around 2.6%.CLICK TO DOWNLOAD FREE SAMPLE

Enzyme Converted Glucose Syrups market is further classified on the basis of region as follows:

Rapid urbanization in regions such as United States, China and Europe is driving the growth of enzyme converted glucose syrups market. Population in urban areas is getting more conscious towards health and its relative supplements. This changing lifestyle of the population living in urban cities is likely to increase the progression of enzyme converted glucose syrups over the forecast period. There is demand by large amount of health conscious people for modified starch for its thickening properties in varied applications like soups, sauces, gravies promoting the demand of modified starch thickeners.

The requirement of modified starch is raising the demand for glucose syrups as it dominates all the other forms of starch and is basically used in all starch related applications such as emulsifier, thickening agent etc. due to their ability to enhance their performance and stability against excessive heat, acid, freezing, change in texture etc. However, the growing demand for convenience and similar foods is increasing health issues such as obesity, diabetes which might taper the growth of industry.

The Enzyme Converted Glucose Syrups Market is segmented as follows: