An electronic countermeasures system is an electronic device used by defense forces of various nations to trick or deceive the detection systems such as radar or sonar. It could be used to defend the territory as well as to launch an offensive weapon. Additionally, it could be used to save the aircrafts from guided missiles. As a result of digitalization in the past decade, the electronic countermeasures market has been developed significantly. It has enhanced the ability of the defense forces to defend their borders. Governments and defense forces across the world are heavily reliant on this technology as it can decide the outcome of a war.

With rise in geo-political tensions around the world, homeland security has gained utmost importance. Electronic countermeasures systems play an important role in defensive as well as offensive roles. Owing to these factors, the market is anticipated to grow at a significant CAGR during the forecast period 2020-2028. The market is segmented by platform into ground based, naval and airborne. The airborne segment is anticipated to hold the leading share in the market as well as grow at the highest rate over the forecast period on the back of rising usage of electronic countermeasures system integrated with unmanned aerial vehicles. CLICK TO DOWNLOAD SAMPLE REPORT 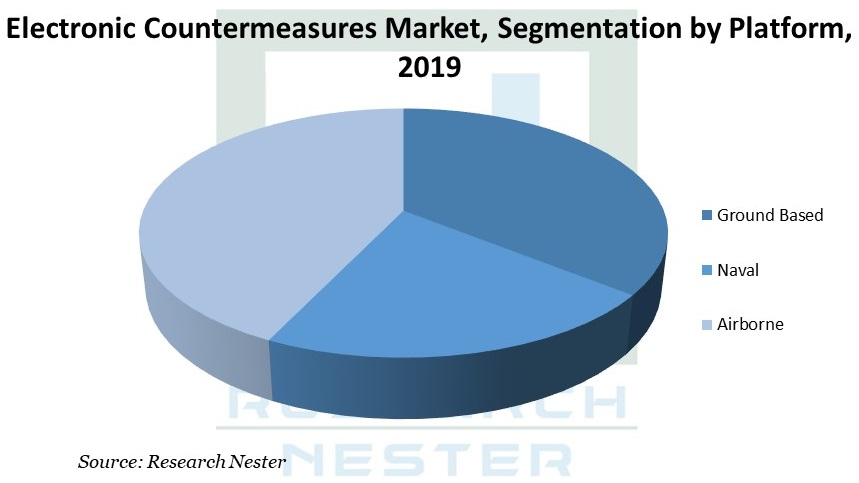 Recent times have seen military confrontations in many regions across the world. Rising uncertainties and regional instabilities is predicted to drive the market growth during the forecast period as countries prepare to secure their territories. Moreover, the ability of electronic countermeasure system to detect the stealth aircrafts and naval vessels is further estimated to result in the market growth.

Many developed and developing countries in the world are focusing on developing cognitive electronic warfare technologies as these have an edge over the traditionally employed technologies. A well planned use of these technologies could decide the outcome of a conflict. Increasing investment in electronic countermeasures research and development to invent sophisticated technology that helps in enhancing end product performance is projected to drive the market growth in future.

Growth in System Reliability and Efficiency

Electronic countermeasures technology has become increasingly reliable and efficient over the years as a result of rising usage of travelling wave tube based solutions. Various countries are heavily dependent upon them for their safety and security which is anticipated to boost the market growth in the coming years.

Use of Sophisticated Technology for Business Development

Electronic countermeasures market is anticipated to grow on the back of increasing use of sophisticated business intelligence technology, strategic management and machine learning. Important decisions such as pricing, marketing, finance and sales need to be taken through usage of analytical tools driven by data which is further expected to drive the market growth. Additionally, Unmanned Aerial Vehicles (UAVs) are becoming popular everyday among the defense forces, which is predicted to lead to the growth of electronic countermeasures market.

When the technology involved in developing the electronic countermeasures becomes increasingly advanced, the cost of innovation is predicted to increase significantly. The cost of the skilled labor involved in developing such technologies may increase as well in the coming years, which is predicted to negatively affect the market growth during the forecast period. In current times of political volatility, trade wars and economic uncertainty, the overall market growth is estimated to be hampered.

Our in-depth analysis of the electronic countermeasures market includes the following segments:

The global electronic countermeasures market is further classified on the basis of regions as follows: