A substance which increases the viscosity of a liquid without substantially changing its other properties is called a thickening agent. The thickening agents used in food processing are commonly referred as edible thickening agents. These are commonly used in the manufacture of sauces, soups and other baked products as food additives. These agents are used to improve the suspension of ingredients or emulsions in the food products, thereby maintaining stability without altering the taste. Polysaccharides such as starches, vegetable gums are used in the manufacture of edible agents. Cornstarch, wheat flour, tapioca are common plant extracted thickeners. Collagen, egg whites and gelatin are the protein based food thickeners.

Different thickeners are used as food additives to suit specific pH foods. Arrowroot is used for Acidic foods and Cornstarch is suitable for frozen foods. Flours have different functionalities to increase stability, consistence and sterilization process. Gelling agents are food additives that are used to stabilize jellies, desserts and candies. Gum Arabic is used in fizzy drinks and confectionaries.

Rising global food consumption levels and increasing affinity towards desserts and sugar-rich foods are some of the significant factors estimated to boost the market growth. Additionally, the growing vegan movement globally is expected to drive the global edible thickening agents market, on account of which the market is estimated to grow with substantial CAGR during the forecast period, i.e., 2020-2028. Based on type, the market is bifurcated into polysaccharides and proteins, out of which, the largest share in the market is anticipated to be held by polysaccharides on the back of products like cornstarch and tapioca. This can be attributed to the properties of suspension and stability of these thickening agents in food processing. The market is further segmented by nature of the edible agents into organic and inorganic segments. Out of these segments, the organic segment was the largest revenue generating segment in 2019 owing to the availability of various buying options pertaining to the product category and preference of consumers. Additionally, the growing affinity towards desserts and sugar-rich foods is predicted to contribute to the growth of the segment. 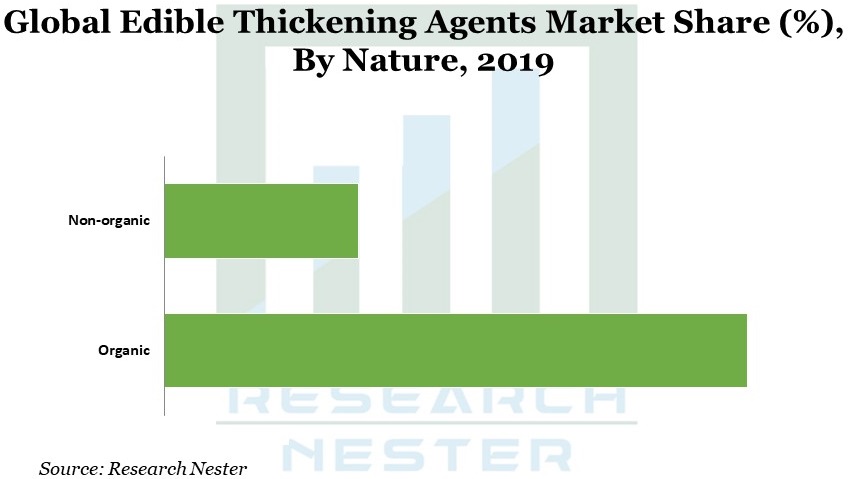 According to FAO (Food and Agricultural Organization), the global food consumption levels have been increasing at a tremendous pace since the 1960s.. The kcal per capita per day measure is the metric that is used and the data shows that in 1960s the global dietary energy is average 2358 kcal per capita per day globally and by 2030 it is projected to be around 3050 kcal per capita per day. The data clearly indicates the huge rise in global food consumption levels in the upcoming years. Increase in disposable incomes leading to the rise in consumer spending especially on the products of FMCG is anticipated to positively influence the edible thickening agents market. These are some of the considerable factors that are estimated to promote the growth of the market. Additionally, this growth is backed by growing affinity towards bakery and confectionery products.

On the back of growing vegan activism across the world, there is a huge surge in demand for vegan products containing significant amounts of food thickeners especially plant extracted additives such as cornstarch and agar-agar which ensure stability and preservation. This, in turn, is estimated to drive the food processers to introduce vegan products as a part of their product portfolio.

It was reported by IHME, that in 2017, 4.7 million deaths globally were caused by obesity and majority of the cases were reported in urban areas of the world where reduced activity and poor diets were attributed to accelerate it. According to World Health Organization (WHO), in 2019, 38 million children under the age of 5 were overweight. The addition of these emulsifying agents results in higher fat and sugar content of the foods and eventually leads to obesity in children or CVDs in adults. The increasing health consciousness is expected to have a negative impact on the market growth.

Our in-depth analysis of the 3D concrete printing market includes the following segments:

On the basis of regional analysis, the edible thickening agents market is segmented into five major regions including North America, Europe, Asia Pacific, Latin America and Middle East & Africa region. The market in North America is anticipated to hold the largest share in the market on account of presence of leading market players in the region which manufacture and market these food thickeners. Moreover, the increase in demand for convenience food, beverages and veganism in this region is estimated to increase the product demand. The market in Asia Pacific region is predicted to grow at the highest rate during the forecast period as a result of rising disposable incomes and food consumption levels. The rising affinity towards frozen desserts in the region, especially in countries such as China, India and Japan is further resulting in the increased demand for edible thickening agents.

The edible thickening agents market is further classified on the basis of region as follows: