With the advancement in technology, there are a lot of revolutionary changes that have emerged in the medical industry. One such transformation is converting glass slides into digital slides that is viewed, shared, managed, analyzed and interpreted on a computer monitor. With the progression in digital pathology, it is now considered one of the most promising fields for diagnosis and prognosis of cancer along with other significant diseases. The growing demand for digital pathology for better image analysis is predicted to supplement the growth of the global digital pathology market with a significant market valuation of USD 726.2 Million by the end of 2023 from USD 337.8 Million during 2016 by witnessing a compound annual growth rate of 11.6% over the forecast period.

The global digital pathology market is segmented by regions into North America, Latin America, Europe, Asia-Pacific and Middle East and Africa, out of which, North-America region dominated the global digital pathology market by contributing a market share of 38.3% in 2016. With a bigger healthcare market, U.S. is further estimated to maintain its dominance in the North America region by registering a CAGR of 10.8% over the forecast period.

After North America, Europe is the second biggest market for digital pathology with Germany holding the highest market share in the region trailed by U.K. Further, the U.K. is anticipated to observe a growth of 2.1x between 2016 and 2023. Furthermore, the Asia-Pacific held 13.5% of market share in 2016 and is undoubtedly poised to become a bigger market for healthcare services in near future.

The Brazil accounted for major share in terms of revenue in overall digital pathology market in Latin America during 2016 and is estimated to remain the biggest market by 2023. Additionally, GCC has generated the maximum revenue of USD 9.9 Million in 2016 on the back of spiked demand for efficient and more accurate in-depth analysis on pathology, whereas South Africa digital pathology market is expected to expand with highest CAGR in Middle East & Africa region by 2023. 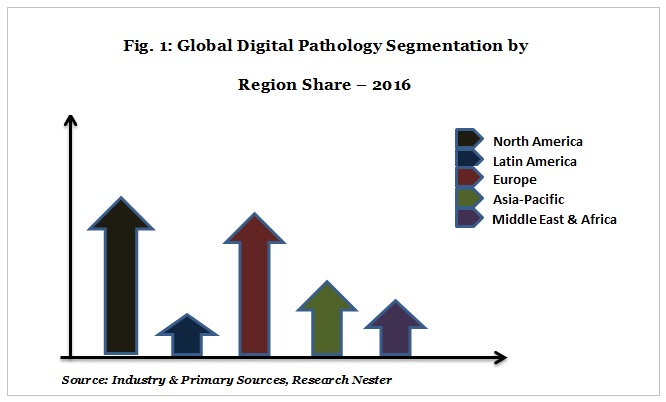 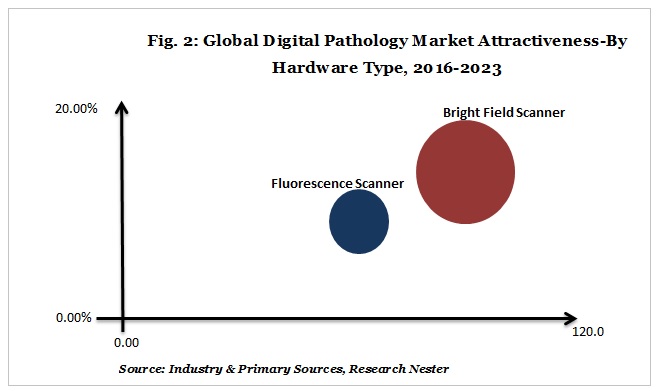 The global digital pathology market is divided by application into tele-consultation, disease diagnosis, drug discovery, education & training and pathology screening. The disease diagnosis segment dominated the market with highest market share in 2016 which can be attributed to various factors such as spiked penetration of health insurance services, hospitals & small clinics equipped with better technology & instruments that will further allow the segment to maintain its dominance in the near future. The disease diagnosis segment is closely trailed by tele-consultation and pathology screening services where the pathology screening services segment is predicted to grow with an absolute $ opportunity of USD 91.7 Million during 2016-2023. 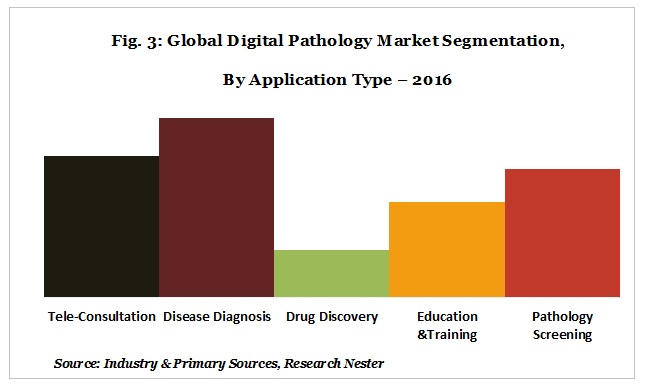 The global digital pathology market has been segmented by end-user into hospital, small/private clinics, diagnostic & private laboratories and research centers. The hospital segment garnered the largest market share of USD 129.5 Million in 2016 followed by diagnostic and private laboratories segment with market share of USD 110.9 Million. Further, the small/private clinics segment is estimated to grow with highest CAGR over the forecast period. Along with that,  the hospital segment is anticipated to rise by 100 BPS and is expected to contribute a market share of 37% by the end of 2023 in global digital pathology market owing to rising government initiatives to support medical hospitals so as to cater large pool of patients.

The global digital pathology market is thriving on the back of the growing need of better image analysis software and personalized medicine in tele-pathology and in cross-departments in hospitals and small clinics. The demand for digital pathology is anticipated to increase as the tele-pathology services along with online pathology diagnostic platforms are expected to witness higher penetration in developing and developed countries. Further, the burgeoned spending on healthcare IT infrastructure and need from pathologists and cloud service providers for faster and better decision making are predicted to trigger the digital pathology demand in upcoming years.

The high maintenance cost, un-availability of skilled manpower combined with high cost associated with integration and implementation of hardware & software into new environment especially for small clinics & private laboratories are some of the barriers faced by the global digital pathology market.

Apollo Enterprise Imaging Corporation, a software solution provider for advancement of patient care and safety, systems development, data center, training programs, customer service and support has entered into an agreement with Quest Diagnostics, for providing imaging and the content management solution with ChartMaxx to manage, retrieve and share a broad range of the clinical multimedia, images and documents.

Moreover, other key and niche players are working towards the expansion of product portfolio along with investing in R&D to gain competitive edge in the global digital pathology market.