The global COPD therapeutics market is estimated to garner revenue of USD 30 Billion by the end of 2031 by growing at a CAGR of ~4% over the forecast period, i.e., 2022 – 2031. Further, the market generated revenue of USD 20 Billion in the year 2021. The growth of the market can be attributed primarily to the rising prevalence of chronic obstructive pulmonary disease (COPD) which is affecting millions of people worldwide. According to the World Health Organization (WHO), chronic obstructive pulmonary disease (COPD) is the third most common cause of death worldwide, which accounted for 3.23 million deaths in 2019. About 90% of COPD deaths among those under the age of 70 years are associated with low- and middle-income countries. As a result of increasing burden of this disease, the global COPD therapeutics market size is expected to enlarge during the forecast period. 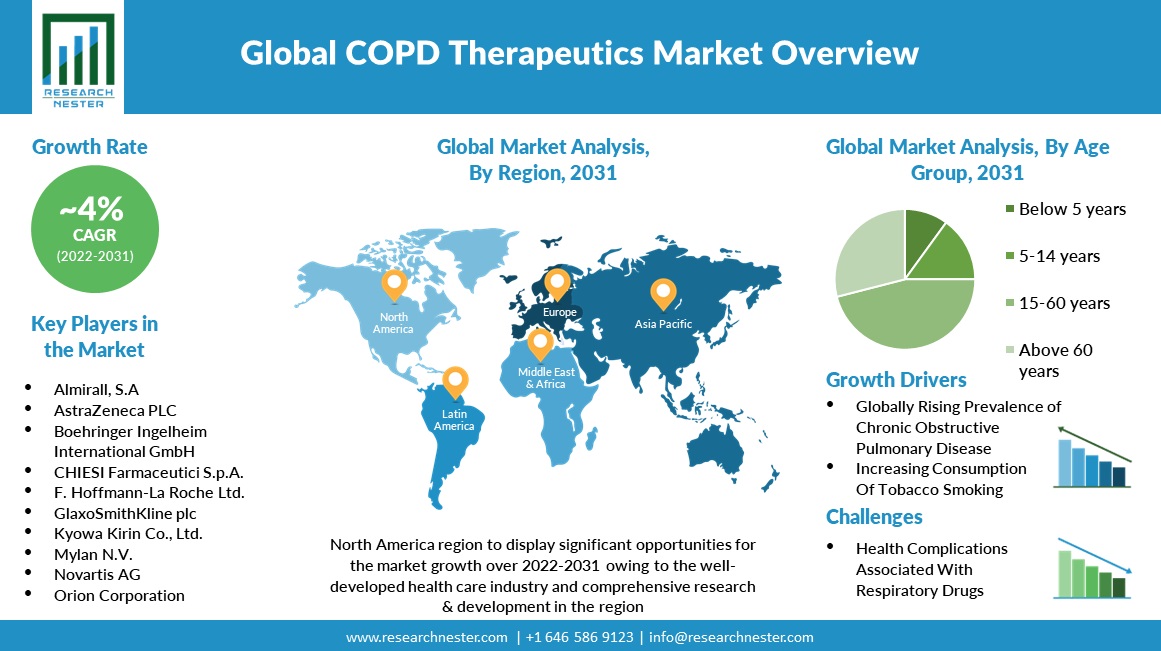 Chronic obstructive pulmonary disease is obstructive pulmonary diseases that affect the lungs and cause breathing difficulty and excessive coughing. The two most common types of COPD are chronic bronchitis and emphysema. The diseases can damage parts of the lungs, block airways with mucus, and cause soreness and inflammation. In addition, increasing cases of asthma worldwide are expected to drive the global COPD therapeutics market. As per the data by the World Health Organization, a total of 262 million people were affected by asthma in 2019 and 455 000 people died from it. Asthma is a chronic inflammatory lung disease that affects the airways and is primarily caused by allergies, irritants, cold air, and dust. Airborne allergens, irritants, extreme weather conditions, harmful gases, chemicals, multiple lower respiratory infections in childhood, and an unhealthy lifestyle are all expected to drive the global COPD therapeutics market. Moreover, global COPD therapeutics market trends such as increasing utilization of digital inhalers and Combination therapy treatment such as LAMA-ICS, LABA-ICS, and triple therapy are projected to drive market growth during the forecast period.

The global COPD therapeutics market is segmented and analyzed for demand and supply by age group into below 5 years, 5-14 years, 15-60 years, and above 60 years. Among these segments, the 15-60 years segment is anticipated to capture the largest market size in the global COPD therapeutics market owing to the growing prevalence of asthma and COPD among this age group. As per the data by the Centers for Disease Control and Prevention, a total of 21,030,479 (8.4%) adults aged over 18 years were diagnosed with asthma in the United States in 2020, which was a significant increase over the previous year. Moreover, almost ~2 million adults aged over 18 years had emphysema in 2018, a common COPD condition in the United States.  Thus, the rising prevalence of COPD conditions among adults is anticipated to drive segment growth during the forecast period.

Regionally, the global COPD therapeutics market is studied into five major regions including North America, Europe, Asia Pacific, Latin America and Middle East & Africa region. Amongst these markets, the market in North America is projected to hold the largest market share by the end of 2031. Well-developed health care industry, comprehensive research & development, strong reimbursement policies as well as a large number of market key players in the region encouraging advanced and efficient products are factors expected to drive the COPD therapeutics market in the region during the forecast period. Furthermore, the increasing incidence of chronic obstructive pulmonary disease and asthma in the region along with the growing patient population is anticipated to drive the regional market over the forecast period. For instance, in 2020, there were 25,257,138 people suffering from asthma in the region. In addition, in 2018, chronic lower respiratory disease (COPD) ranked as the fourth leading cause of death in the United States. There were almost 15.7 million Americans (6.4%) who have been affected by COPD in 2018.

The global COPD therapeutics market is further classified on the basis of region as follows:

Our in-depth analysis of the global COPD therapeutics market includes the following segments:

What are the major factors driving the growth of the COPD therapeutics market?

Rising prevalence of COPD and asthma along with higher consumption of tobacco smoking are the major factors driving the growth of the COPD therapeutics market.

What would be the CAGR of COPD therapeutics market over the forecast period?

What are the challenges affecting the COPD therapeutics market growth?

Health complications associated with respiratory drugs along with strict government approval process for COPD treatment are the challenges affecting the market growth.

Which region will provide more business opportunities for growth of COPD therapeutics market in future?

Who are the major players dominating the COPD therapeutics market?

What are the segments in the COPD therapeutics market?

The market is segmented by drug class, type, age group, end user, and by region.

Which segment captures the largest market size in age group segment in the COPD therapeutics market?

The 15-60 years segment is anticipated to garner the largest market size by the end of 2031 and display significant growth opportunities.