Cooking robots are strategically a new concept that induces different types of robots for cooking applications. These robots are designed specifically for use in the cooking of food and they are especially built with food grade materials that do not contaminate the food. Cooking robots can be of single arm, such as that of a SCARA robot, or can be a collaborative robot with multiple functionalities. Cooking robots usually are equipped with advanced technologies, such as machine learning, that runs on the algorithm of pattern-based learning fed externally. 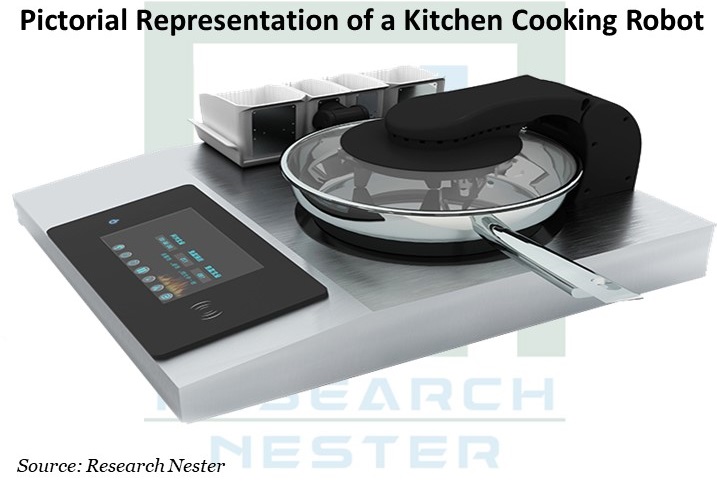 The global cooking robot market is thriving on the back of the growing concerns for food safety & hygiene, growing trends for automation across end user industries including the food and beverage industry, increasing demand for robotics-as-a-service, increasing technological innovations for food robotics, rising demand for collaborative robots, followed by the rising use of machine vision and artificial intelligence technologies. The market is also thriving on account of the increasing sales of retail and food services around the world, which is raising the need amongst food chain operators to increase their efficiency speed for faster delivery of food is also anticipated to promote towards the growth of the global cooking robot market. According to the statistics by the United Census Bureau, in the United States, sales for retail and food services increased from USD 4283737 million in the year 2010 to USD 6023408 million in the year 2018. 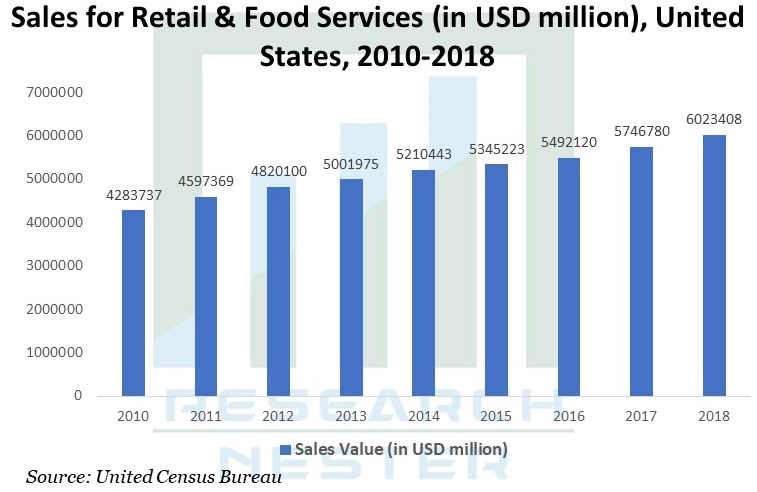 The global cooking robot market is segmented by regions into North America, Latin America, Europe, Asia Pacific, Middle East and Africa. Among these regions, the market in North America registered the largest share of 51% along with a value of USD 43946.7 thousand in the year 2019 and is further anticipated to reach a value of USD 175251.2 thousand by the end of 2028 by growing at a CAGR of 16.90% during the forecast period. Factors such as the increasing emergence of commercial and residential end-user applications, such as pizza making, sandwich & burger making, cocktail preparations amongst others in the U.S. and Canada are primarily anticipated to drive the growth of the North America cooking robot market. Additionally, presence of several large fast-food supply chains, where cooking robots can be deployed, backed by the increasing sales of the restaurants are further anticipated to drive the growth of the market in the region. According to the statistics by the National Restaurant Association of America, the region is anticipated to record sales worth USD 899 billion in the year 2020, along with more than 1 million restaurant locations by the end of 2020. 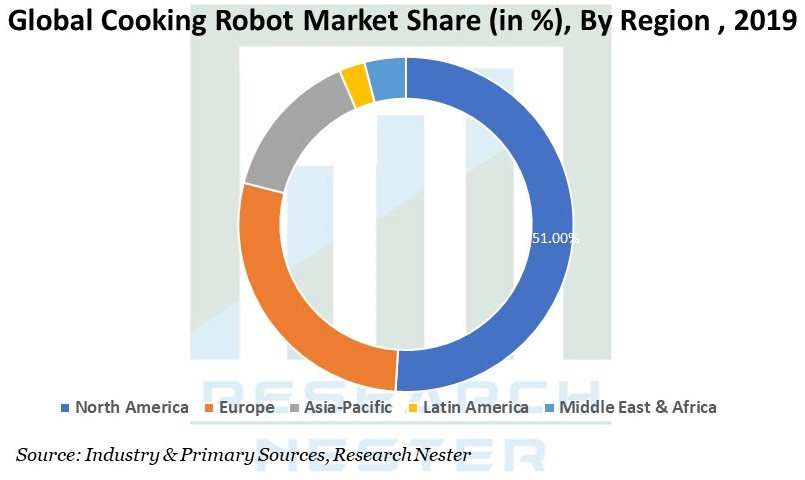 The global cooking robot market has been segmented on the basis of end user into residential and commercial. The commercial end user segment registered the largest share and held a value of USD 77693.2 thousand in the year 2019. Additionally, the segment is further anticipated to reach a value of USD 295169.5 thousand by the end of 2028 by growing at a CAGR of 16.28% during the forecast period. In the modern competitive and highly advanced business environment, the emergence of the robot in the market is becoming significant for various commercial end-user applications. The major factors related to the emergence of robots for commercial use include reduced human interference, increased work efficiency, automatic controls over the cooking parameters, customizations according to the customer requirement, consistency, and others. The rising concerns in the commercial end-user applications for manpower & chef availability, increasing wastage of food, rising CO2 emission, and other factors have raised the need for the deployment of cooking robots. The commercial end user segment is further divided into fast food restaurants, fine dining restaurants, café, contracted food services, ghost kitchens, food trucks, convenience stores, retailers/grocers and small scale/regional FM. The fast food restaurants segment registered the largest market share of 23.94% in the year 2019 and is also anticipated to grow with the highest CAGR of 17.44% during the forecast period. 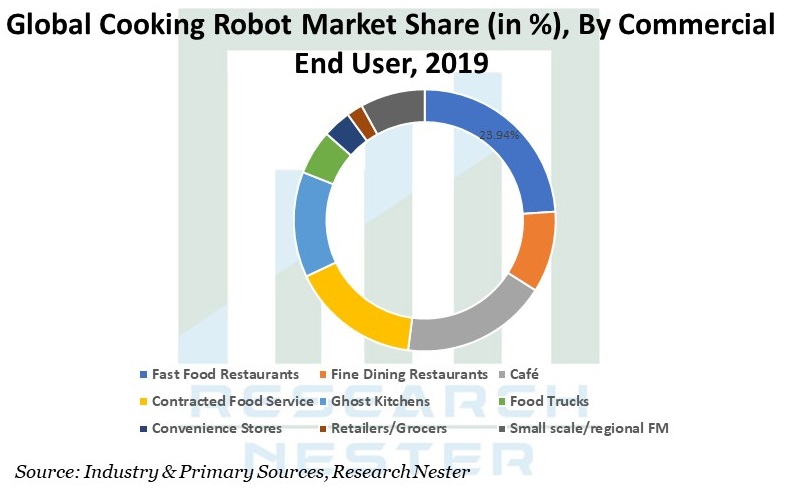 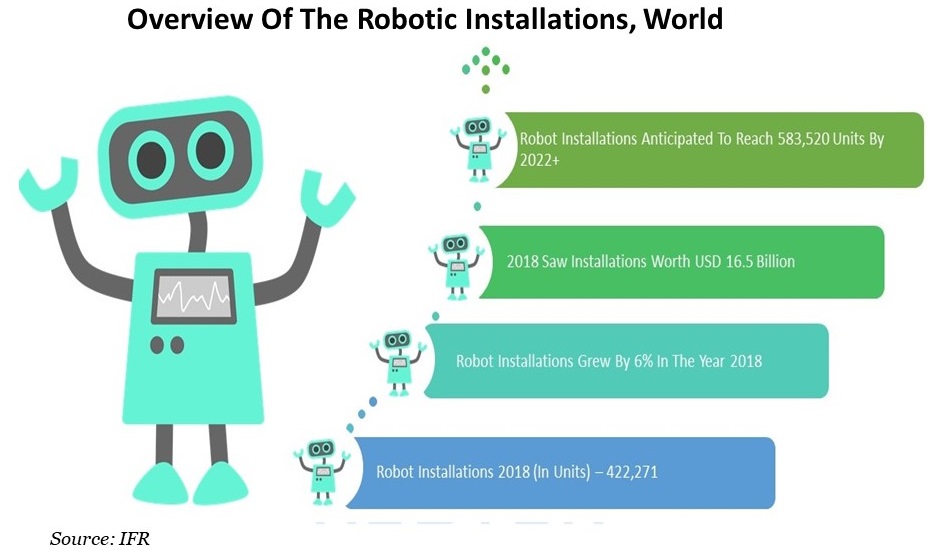 The growing trend of industrial automation across several end user industries, along with the growing trends of Industry 4.0, along with internet of things (IoT) and industrial internet of things (IIoT), backed by the advancements in artificial intelligence (AI) and machine learning (ML), have led to the increasing adoption of robots across the end user industries. Moreover, there is an increasing demand for professional service robots across the foodservice industry, backed by the benefits provided by them, such as sizeable continuous uptime of over 100,000 hours, cloud connectivity, and others. Robots are anticipated to become a crucial part of the cooking process based on their innovative features such as visual recognition, failure prediction, and others. Moreover, technological advancements and developments in the food industry are backing a substantial increase in robot installations throughout the years. Robots' potential to aid the cooking process across kitchens in the food & beverage industry is supplementing the potential of robotics market. Additionally, increasing food safety regulations across the industry is anticipated to drive the global cooking robot market over the coming years. According to the statistics by the World Health Organization (WHO), around 600 million people globally fall ill after eating contaminated food. Further, the statistics also stated that 420,000 people die every year for consuming contaminated food.

There is an increasing need amongst food manufacturers to deliver high quality food by using food robotics owing to the numerous benefits associated with the deployment of robots in the food processing industry. For instance, Moley, a robotics company based in the United Kingdom that creates robots for the use in the kitchen, announced the world's first robotic kitchen that features innovative and advanced, functional robots integrated into a professional kitchen. The robot has the flair & skills comparable to professional chefs. The prototype was showcased at the International Robotics Show, and the consumer version of the innovative solution is set for the launch in late 2020. Similarly, Wilkinson Baking Company offers an automated solution for the production of bread called the Mini Bakery. The computerized solution mixes forms bakes and cools the bread all on its own. Mini Bakery also informs the employees when the bread needs to be sliced. This breadbot is full of innovative features such as automation, consistent ingredient measurement, small footprint, and others. Such factors are anticipated to drive the growth of the global cooking robot market during the forecast period.

1) What are the major factors driving the growth of the Cooking Robot market?

Ans: Growing demand for professional service robots across end user verticals and the growing innovations in food robotics are some of the major factors that are driving the growth of the market.

2) What would be the CAGR of Cooking Robot market over the forecast period?

4) Which region will provide more business opportunities for growth of Cooking Robot market in future?

5) Who are the major players dominating the Cooking Robot market?

7) What are the major segments in the global cooking robot market?

Ans: The market is majorly segmented by robot type, application, end user and by region.

8) What can be the significant growth opportunity for the end user segment in the cooking robot market?

Ans: The commercial segment, which is a sub-segment of the end user segment, held the largest market share in the year 2019 and is anticipated to reach a value of USD 295169.5 thousand by the end of 2028.

Ans: fluctuation in economies across the world and lack of skilled workforce are some of the major factors anticipated to act as a barrier towards the growth of the global cooking robot market.