The global concrete admixtures market is estimated to garner a revenue of ~USD 32 Billion by the end of 2033 by growing at a CAGR of ~9% over the forecast period, i.e., 2023 – 2033. Further, the market generated a revenue of ~USD 19 Billion in the year 2022. The growth of the market can be attributed to boosting demand for more construction activities, a growing number of constructions including commercial and residential buildings, and increasing renovation works across the world. For instance, it is anticipated that 3,500 new structures would be added each day by construction workers by the year 2050. 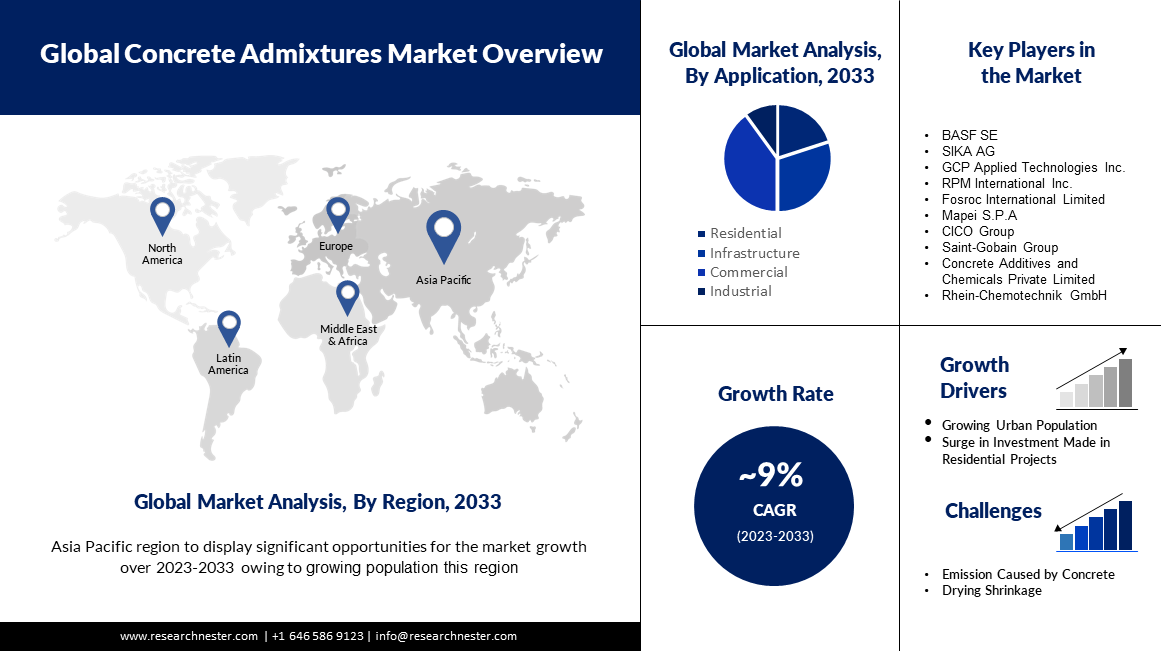 Additionally, there has been growing investment made by the government in the construction industry, a growing population with rising income, and the development of smart cities through government projects which are also estimated to drive market growth. In March 2021, the Indian Parliament adopted a bill to create the National Bank for Financing Infrastructure and Development (NaBFID), a development finance institution with a budget of about USD 3 billion, to finance infrastructure projects in India.

Emissions caused by concrete may hamper the consumption of a concrete type of admixture. Owing to the usage of Portland cement in concrete pavements, a significant quantity of carbon dioxide (CO2) is released into the environment. This further causes air, water, and soil pollution and also impact human health. Hence this factor is estimated to hinder the growth of the market.

The concrete admixtures market is segmented and analyzed for demand and supply by application into residential, infrastructure, commercial, and industrial. Out of these, the commercial segment is anticipated to garner the largest revenue by the end of 2033, backed by the growing construction of commercial buildings. Buildings for offices, hotels, shops and entertainment venues are increasingly in demand. The six major cities in India experienced a net absorption of roughly 30 Mn sqft in 2020.

The Asia Pacific region market, amongst the market in all the other regions, is projected to hold the largest market share by the end of 2033. Owing to growing population in this region. The Asia and Pacific region, which also includes the two most populous countries in the world, China and India, is home to almost 4.3 billion people. About 60 percent of the world's population resides in this area. Further growing urbanization and a rise in disposable income are also estimated to boost the growth of the market in this region.

Our in-depth analysis of the global concrete admixtures market includes the following segments:

What are the major factors driving the growth of the concrete admixtures market?

The major factors driving the growth of the market are growing urban population, surge in investment made in residential projects, rising population, and others

What would be the CAGR of concrete admixtures market over the forecast period?

What are the challenges affecting the concrete admixtures market growth?

Emission caused by concrete, drying shrinkage, and stringent government regulations are some of the major factors estimate to hinder the growth of the market.

Which region will provide more business opportunities for growth of concrete admixtures market in future?

Who are the major players dominating the concrete admixtures market?

What are the segments in the concrete admixtures market?

The market is segmented by type, application, and by region

Which segment captures the largest market size in type segment in the concrete admixtures market?

The commercial segment is anticipated to garner the largest market size by the end of 2033 and display significant growth opportunities.