Electric Vehicles or EVs are referred to all those vehicles which are propelled by one or more electric or traction motor. They differ from conventional vehicles as electric vehicles use electrical energy for its driven mechanism, usually a battery, instead of other conventional fuel sources. Although, generation of electricity to these vehicles for consumption can be from various sources, ranging from fossil fuels, nuclear power or other renewable sources of energy. Earlier, electric vehicles were just limited to electric car or an electric bike, but with the advance in technology, electric vehicles gained popularity amongst various other modes of transport. 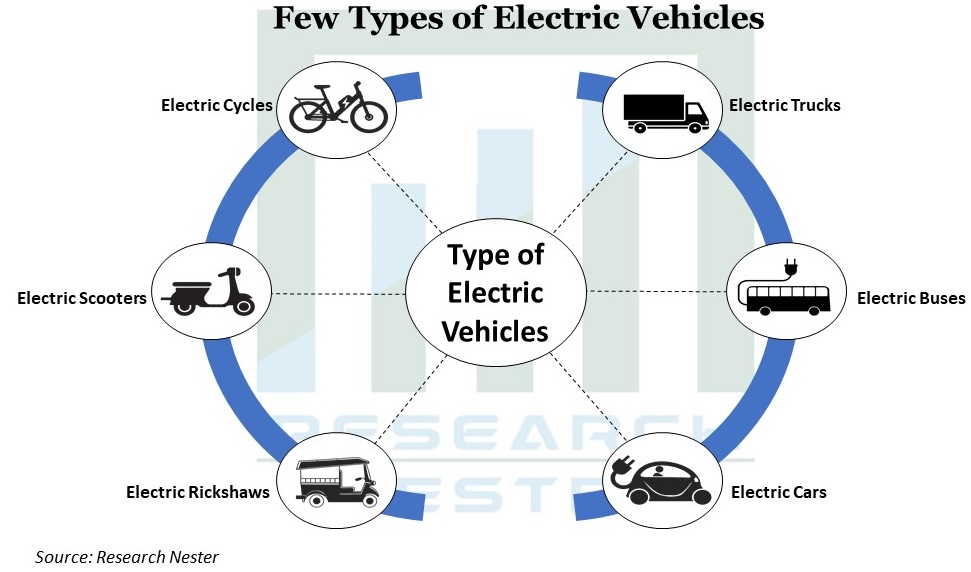 The China EV market is thriving on the back of growing concern for environmental pollution across the region, along with the need to implement the 2030 development agenda as a part of the commitment under goal number 13 of the sustainable development goals (SDGs) formed by the United Nations Development Programme (UNDP). With growing economy of China, contribution to exhaust emissions by different industries in the region is also increasing at a massive pace. As a result, there is a sudden increase in the total number of deaths caused by severe levels of air pollution. The total number of deaths caused by air pollution in China increased from 1136270 numbers in the year 2007 to 1242987 numbers in the year 2017, as stated in the survey report Global Burden of Diseases (GBD) 2017 of the Institute for Health Metrics and Evaluation (IHME). 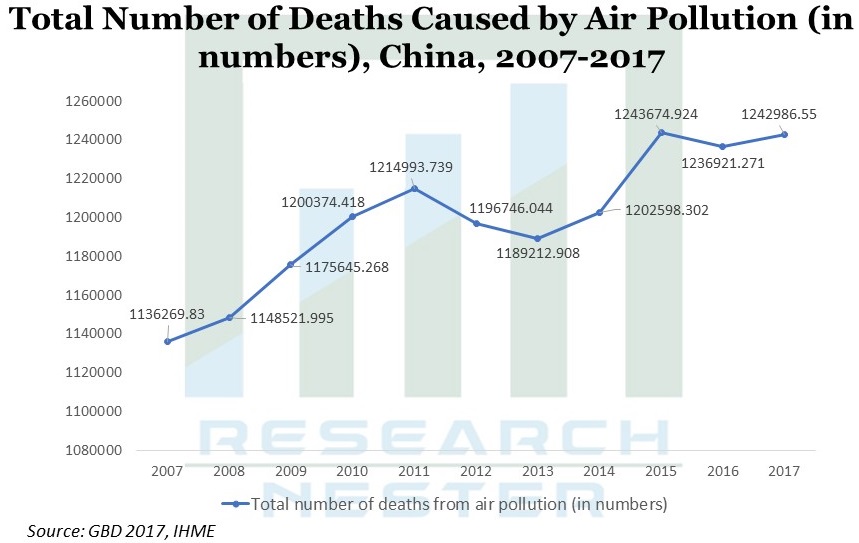 The market is anticipated to record a CAGR of around 30.21% throughout the forecast period, i.e. 2020-2028. The China electric vehicles market is segmented by vehicle type into passenger, commercial and other vehicles. The passenger segment is further segmented into cycles, scooters, bikes, cars and others, out of which, electric car segment is anticipated to hold the largest market share on the back of rising technological advancements observed in the batteries of electric vehicles, providing longer battery life as well as power to the vehicle, along with passenger cars contributing to the major share of vehicular pollution. The government of China has rolled out several laws and policies to ban vehicles that doesn’t meet the emission standards so as to curb the problems of air pollution in the country. As passenger cars occupy a major share of the total vehicle fleet, it is anticipated that sales of electric cars will grow at a rapid pace, and in turn the growth of the segment in the China electric vehicles market. Additionally, the increasing growth rate observed for electric cars in the region is also anticipated to contribute to the growth of the segment in the China electric vehicles market in the upcoming years. According to the survey report “Global EV Outlook 2019”, of the International Energy Agency, around 45% of the world’s electric car fleet was present in China in the year 2018. Additionally, the stock of electric cars in China almost doubled between 2017 and 2018 to reach 2.3 million. CLICK TO DOWNLOAD SAMPLE REPORT 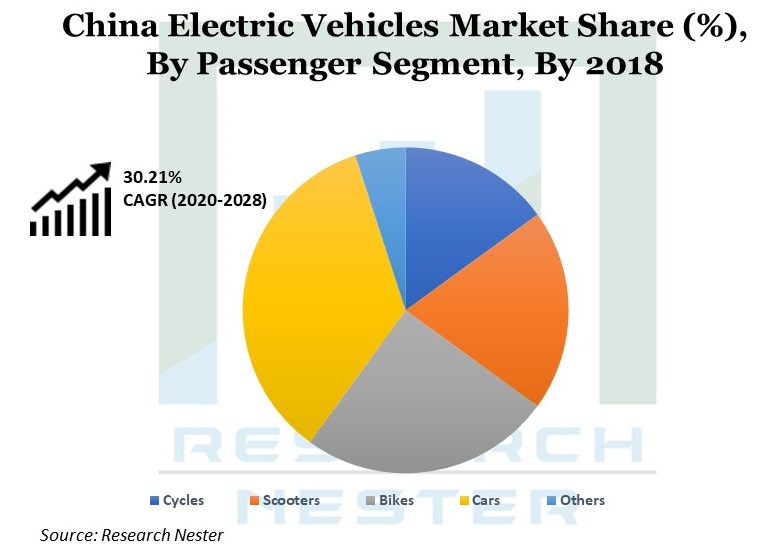 China – One of the World’s Largest Electric Vehicle Market

According to the survey report “Global EV Outlook 2019”, of the International Energy Agency, China remained the world’s largest electric car market with nearly 1.1 million electric cars sold in the year 2018, up from almost 600,000 numbers in the year 2017. Moreover, the region accounted for 55% of the global electric car market. Apparently, the electric two-wheeler market, which is led by China, produced 26 million vehicles in the year 2018 and had an estimated 250 million units in circulation. Furthermore, about 54,000 electric LCVs (mostly BEVs) were sold in the region during the same year.

Electric vehicle sales in China is increasing at a massive pace owing to increasing concerns for severe air pollution levels in the region, along with stringent norms of the government for curbing environmental pollution and supportive policies that outlooks to enhance the efficiency of vehicles. Additionally, increasing need of the nation to reduce its dependence on oil imports, along with restrictive actions taken by the government to limit the issue of registration permits for combustion-engine vehicles, along with the increasing investments for deploying electric vehicle charging infrastructure across cities in the nation are some of the factors that are estimated to contribute to the growth of the China electric vehicles market.

Additionally, development of several new policies, such as the New Energy Vehicle (NEV) mandate policy illustrated by the Ministry of Industry and Information Technology (MIIT) of China, which is a modified version of California’s Zero Emission Vehicle (ZEV) mandate, that promotes compliance of new energy vehicles so as to meet the goals of enhancing efficiency of electric vehicles, along with other supportive policies initiated by the Electric Vehicles Initiative (EVI), which is a multi-governmental policy forum, established in the year 2009 under the Clean Energy Ministerial, are some of the factors anticipated to drive the growth of the China electric vehicle market during the forecast period.

According to the survey report “Global EV Outlook 2019”, of the International Energy Agency, China remained the country with the world’s largest installed publicly accessible charging infrastructure, and further accounted for around 78% of the global share of publicly accessible fast chargers in the year 2018. 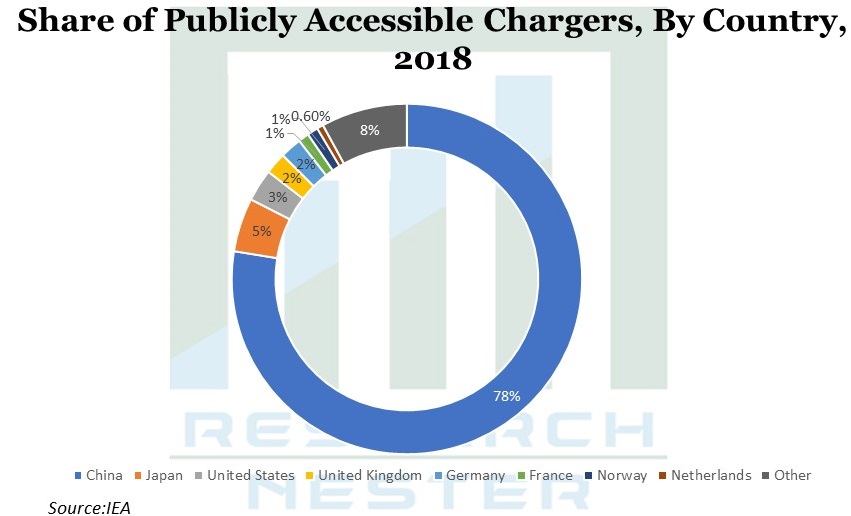 Our in-depth analysis of the China electric vehicles market includes the following segments: