Child safety seats are referred as the seats designed to provide protection to children from the injuries during car collisions or accidents. These seats are available in various sizes pertaining to the height and weight of a child.

Increase in the disposable income, enhanced awareness among parents towards child safety and change in lifestyle are major contributors to the child safety seat industry. Increasing government regulations for installing the seats and rising number of birth rates in countries such as China and India are some of the factors bolstering the growth of global child safety seat market over the forecast period.

Growing demand for child restrained systems with easy convenience and flexibility offered by them have significantly propelled the demand for child safety seat across the developed and developing countries globally. The market size of global child safety seat was valued at USD 4,056.4 Million in 2018 and is expected to cross USD 6,254.5 Million by the end of 2025, growing at a CAGR of 5.03% over the forecast period i.e. 2018-2025. 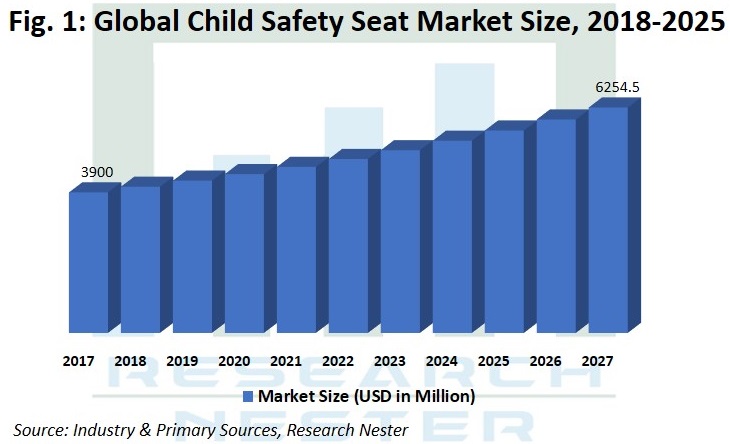 The global child safety seat market is segmented region wise into 5 major regions comprising of North America, Europe, Asia Pacific, Latin America and Middle East & Africa. In North America region, the child safety seat market is expected to grow on account of rising urbanization and GDP of the region from the year 2016 to 2017. The infant car seat is majorly preferred in comparison to the other car seat. Stringent government regulations related to installation of child seat for infants has contributed to the market share. Dorel Juvenile Group, Graco Children Products and Diono LLC are some of the leading manufacturers of child safety seats such as infant, booster and convertible car seat.

The market in the region is projected to garner an estimated revenue of USD 2,304.8 Million, growing at a CAGR of 4.7% by 2027. The Asia Pacific market is expected to witness highest growth rate of CAGR of 6.1% over the forecast period. Rising employment opportunities across the region has resulted in the rise of urban population. This, in turn, has increased the disposable income leading to enhanced demand for child safety seat across the region. 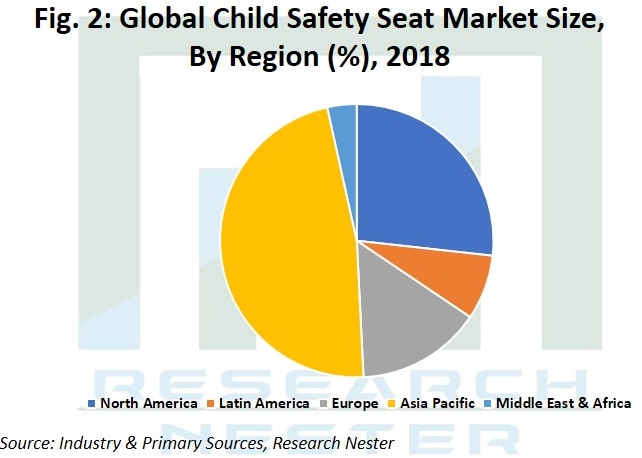 Among these segments, the infant car seat is projected to contribute majorly and is expected to occupy a global market share of around 30% by 2027, while growing at a CAGR of 4.4% during the forecast period. The growth in this segment is credited to implementation of government laws towards the adoption of safety seats for infants.

Combined car seat segment is anticipated to expand at a significant rate over the forecast period owing to implementation of innovative features ensuring more safety and comfort to the babies by positioning the shoulder pads to comfortably to child’s head, neck and shoulder. For instance, RECARO Performance sport model is offering a combination baby car seat that can be used for a weight range between 20 lbs and 120 lbs. These seats also use a patented twist resistant HERO technology which prevents the twisting of the harness ensuring proper chest clip positioning. This in turn is pro0jectd to enhance the safety of children, leading to market growth.

Further, growing demand of convertible car seat is expected to fuel lucrative growth in the child safety seat market in near future. The growth is attributed to the ability of these seats which can be installed as both rear facing and forward facing for children. Further, it has higher limits in rear facing weight up to 40–50 pounds which make them ideal for bigger babies and toddlers along with a 5-point harness attached at the shoulders, hips and between the legs.

The global child safety seat market is segmented into boutique, specialty stores, supermarkets and online stores, out of which the supermarkets segment held the largest market size in 2018 and is estimated to grow significantly throughout the forecast period. Further, online distribution channels are expected to increase on account of rising conversion of offline rental distributors to online distribution channels. This change is primarily attributed due to increasing millennial population along with rising middle-class income families around the developing countries. Besides, factors such as, free coupons, ease of shipment, and other maintenance benefits from online channels is expected to drive this segment significantly.

Increasing stringent government regulations for installation of child safety seat is expected to drive the demand globally over the forecast period. Governments across the globe are taking initiatives to avoid the child injuries due to traffic and car incidents. For instance, the United States government implemented child restraint law in 2017. According to the law, children under age 8 or less than 60 lbs are mandatory to use a child safety seat. This could include a car seat or a booster seat secured by a lap and shoulder belt. Additionally, significant increase in the number of child’s death and injuries caused due to car accidents is anticipated to boost the growth of global child safety seat market over the forecast period.

Declining birth rates in the developed regions is estimated to play a key role in limiting the growth of global child safety seat market over the forecast period. In 2018, birth-rates fell down for a fourth consecutive year in United States bringing the number of people born in the country to its lowermost level in 32 years. According to National Centre for Health Statistics, around 3,788,235 babies were born in the United States which is a 2 percent decrease from 2017. This is projected to hamper the market growth in the country in forthcoming years.

Additionally, high price of baby car seats is inhibiting the purchase of child safety seat amidst a large stratum of global population which in turn is hampering the development of the global child safety seat market. For instance, a good quality infant car seat ranges around USD 200-700, which cannot be afforded by several people in the country.

Artsana Group is an Italian company specialised in distributing healthcare and infant care products. The company has 21 branches globally and trades its brands, Chicco, Prenatal, Neo Baby, Boppy etc. in over 100 countries via direct sales and franchising their products with approximately 400 delivery centers.