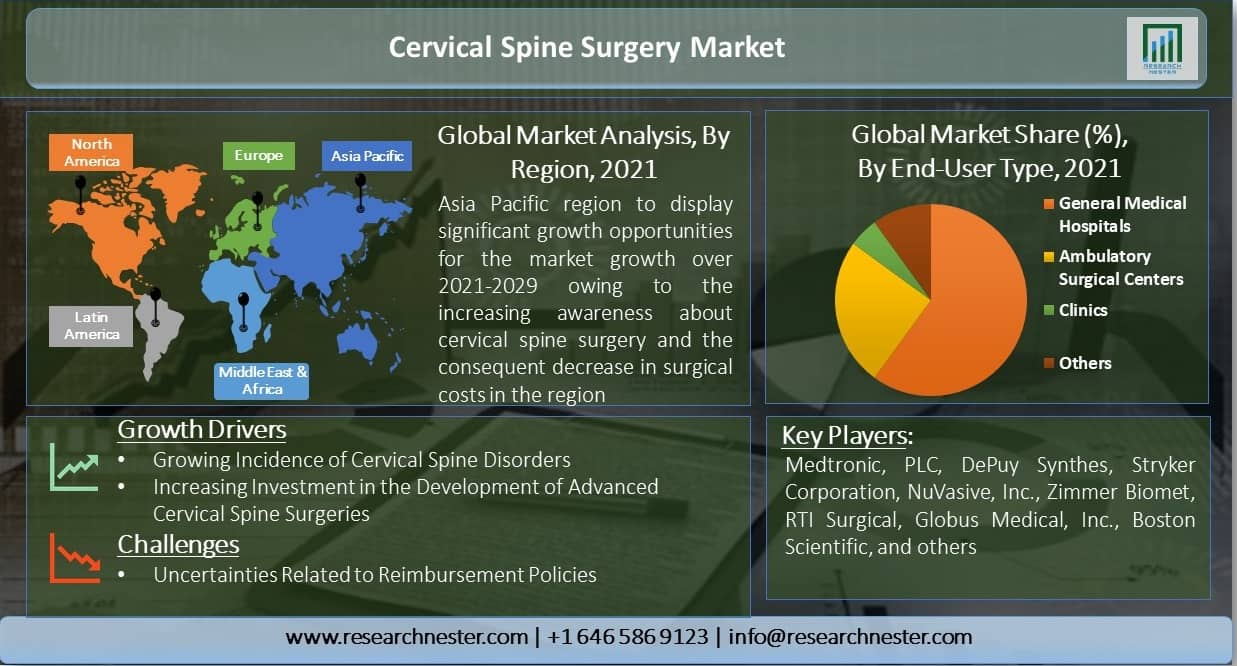 On the basis of end-user, the general medical hospitals’ segment in the global cervical spine surgery market is projected to grow with a significant CAGR over the forecast period. The growth of the segment can be attributed to the fact that general medical hospitals have relatively more developed infrastructure for surgical procedures compared to other segments, which results in a considerable portion of the population with cervical spine problems on a global level opting for such healthcare facilities.

Geographically, the market is segmented into North America, Latin America, Europe, Asia Pacific and the Middle East & Africa region. The market in the Asia Pacific is predicted to grow at the highest CAGR over the forecast period owing to the increasing awareness about cervical spine surgery and the consequent decrease in surgical costs in the region. Furthermore, in 2021, the market in North America is evaluated to occupy the largest share in terms of revenue, owing to the increasing elderly population, accompanied by the presence of leading healthcare service providers in the region. Along with this, North America also leads in terms of medical research and patient care, which is also expected to contribute to the market growth in the region. Alternatively, the market in Europe is also anticipated to occupy a significant share in the cervical spine surgery market on account of rising preference for minimal invasive surgeries in the region. As per the research study published by European Spine Journal, the presence and severity of radiographic disc degeneration in the cervical spine, increases with ageing. 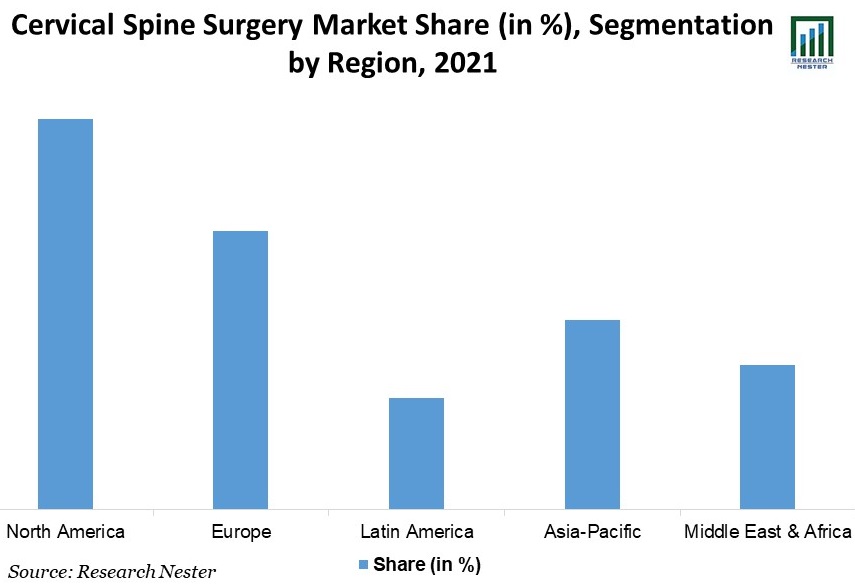 The global cervical spine surgery market is further classified on the basis of region as follows:

1) What are the major factors driving the growth of the cervical spine surgery market?

Ans: The growing incidence of cervical spine disorders and increasing investment in the development of advanced cervical spine surgeries are the key factors driving market growth.

2) What would be the CAGR of cervical spine surgery market over the forecast period?

3) What are the challenges affecting the cervical spine surgery market growth?

Ans: The uncertainties related to reimbursement policies and lack of awareness about cervical spine surgeries in lower economic regions are estimated to hamper market growth.

4) Which region will provide more business opportunities for growth of cervical spine surgery market in future?

Ans: The market in Asia Pacific region will provide ample growth opportunities owing to the increasing awareness about cervical spine surgery and the consequent decrease in surgical costs in the region.

5) Who are the major players dominating the cervical spine surgery market?

7) What are the segments in the cervical spine surgery market?

Ans: The market is segmented by surgery type, end-user and region.

8) Which segment under the end-user segment captures the largest market size in the cervical spine surgery market?

Ans: With respect to end-user, the general medical hospitals’ segment is anticipated to hold the largest market share owing to the presence of relatively more developed infrastructure for surgical procedures in this segment.