·   January 2020- Jazz Pharmaceuticals, one of the largest biopharmaceutical companies, revealed that it has submitted a New Drug Application for JZP-258 for cataplexy and excessive daytime sleepiness.

The global cataplexy drugs market is estimated to garner a large revenue by growing at a notable CAGR over the forecast period, i.e., 2022 – 2030. The growth of the market can be attributed to the growing prevalence of cataplexy disorder around the world, increasing geriatric population and rise in awareness levels about various treatment options for this condition. According to the World Health Organization, in 2018, 125 million people around the world were aged 80 years or older. By 2050, the world’s population aged 60 years and older is expected to total 2 billion, up from 900 million in 2015. Apart from these, there is a surge in the number of people suffering from a host of disorders such as hallucinations, sleep paralysis, disrupted nocturnal sleep, and obesity, which is also considered to be a crucial factor driving market growth in the upcoming years. Furthermore, increasing consumption of alcohol, tobacco and coffee, along with stressful lifestyle are also projected to fuel the expansion of market in the near future. 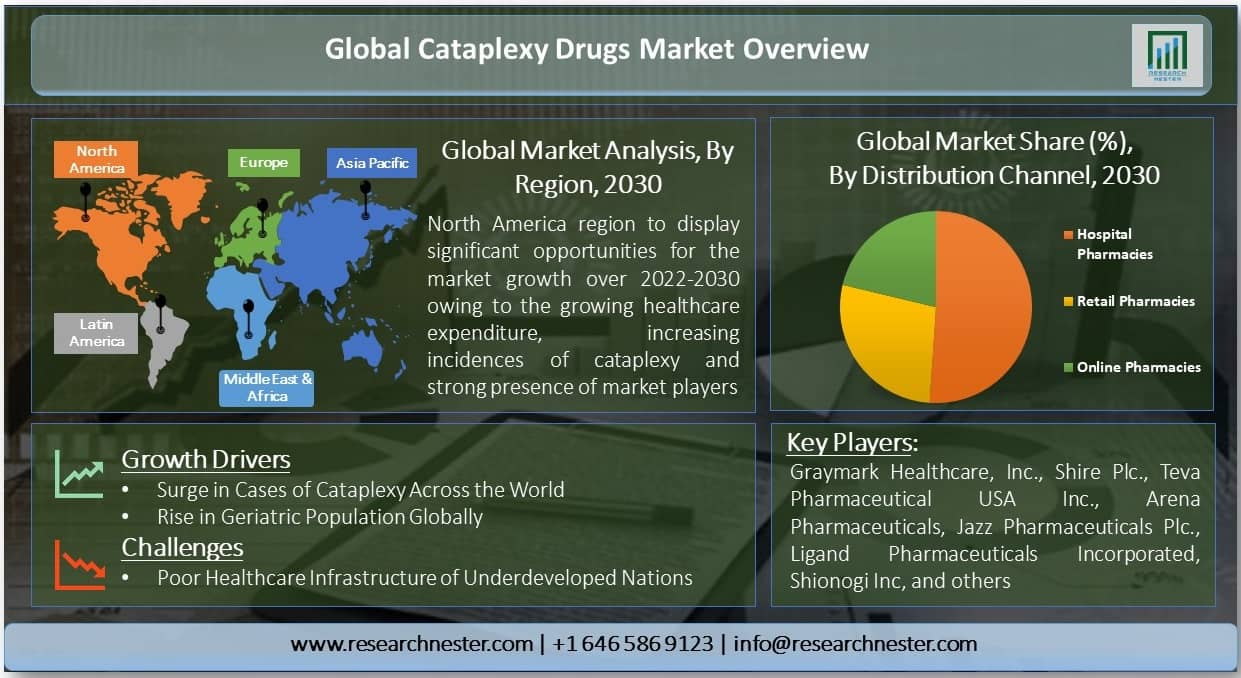 The market is segmented by drug type into central nervous system stimulants, sodium oxybate, tricyclic antidepressants, and others, out of which, the sodium oxybate segment is anticipated to witness the highest growth in the global cataplexy drugs market on account of the high effectiveness of this drug for treating cataplexy and daytime extreme sleepiness. Along with these, rising awareness about the benefits of sodium oxybate among people, is also projected to boost the growth of the market segment in the coming years. Additionally, on the basis of distribution channel, the segment for hospital pharmacies is assessed to grab the largest share during the forecast period, which can be credited to the fact that a hospital facility promotes frequent interactions of prescriber and other health professionals and improved input in making efficient drugs related decisions.

On the basis of geographical analysis, the global cataplexy drugs market is segmented into five major regions including North America, Europe, Asia Pacific, Latin America and the Middle East & Africa region. The market in North America is estimated to witness noteworthy growth and garb the largest share over the forecast period on the back of the high healthcare spending, rising number of cases of cataplexy and strong presence of prominent market players in the region. According to the National Health Expenditure Accounts (NHEA), total healthcare spending in the United States grew 4.6 percent in 2019, reaching USD 3.8 trillion. As a share of the nation's Gross Domestic Product, health spending accounted for 17.7 percent. Moreover, the market in Europe is also estimated to occupy a significant share owing to the rising number of R&D activities in the medical sector and growing investments of key industry players to develop and commercialize their drug candidates in the region.

The global cataplexy drugs market is further classified on the basis of region as follows:

Our in-depth analysis of the global cataplexy drugs market includes the following segments:

What are the major factors driving the growth of the cataplexy drugs market?

The major factors driving market growth are growing prevalence of cataplexy disorder around the world and rising geriatric population globally.

What would be the CAGR of cataplexy drugs market over the forecast period?

What are the challenges affecting the cataplexy drugs market growth?

Poor healthcare infrastructure of underdeveloped nations is estimated to hamper the market growth.

Which region will provide more business opportunities for growth of cataplexy drugs market in future?

North America will provide more business opportunities for market growth owing to the high healthcare spending, and rising number of cases of cataplexy.

Who are the major players dominating the cataplexy drugs market?

What are the segments in the cataplexy drugs market?

The market is segmented by drug type, distribution channel, and by region.

Which segment captures the largest market size in the distribution channel segment in the cataplexy drugs market?

The hospital pharmacies segment is anticipated to hold largest market size in value and is estimated to grow at a robust CAGR over the forecast period and display significant growth opportunities.