·  February 7, 2020- Hexcel Corporation and NaCa Systems joined hands for the development of a lightweight carbon fiber prepreg and wood fiber composite sports car seat back by using a rapid press molding process. The product is projected to offer a host of benefits to automobile manufacturers.

The global carbon fiber market is estimated to gather a significant revenue by recording a CAGR of ~9% over the forecast period, i.e., 2022 – 2030. The growth of the market can be attributed to the increasing demand for carbon fibers from wind energy and aerospace industries, growing usage of carbon fiber in 3D printing, and rise in consumption of green energy all across the world. According to the International Energy Agency, the demand for renewable energy use increased by 3 percent in 2020. In addition, there was a 7 percent increase in electricity generated from renewables that same year. Along with these, carbon fibers have high tensile strength, superior chemical resistance and temperature tolerance, low weight and distinguished thermal expansion. These properties of the fiber are expected to raise its demand in the imminent time, which in turn is predicted to boost the market growth. Furthermore, imposition of stringent eco-friendly regulations in developed and developing nations is projected to offer abundant growth opportunities to the market in the upcoming years. 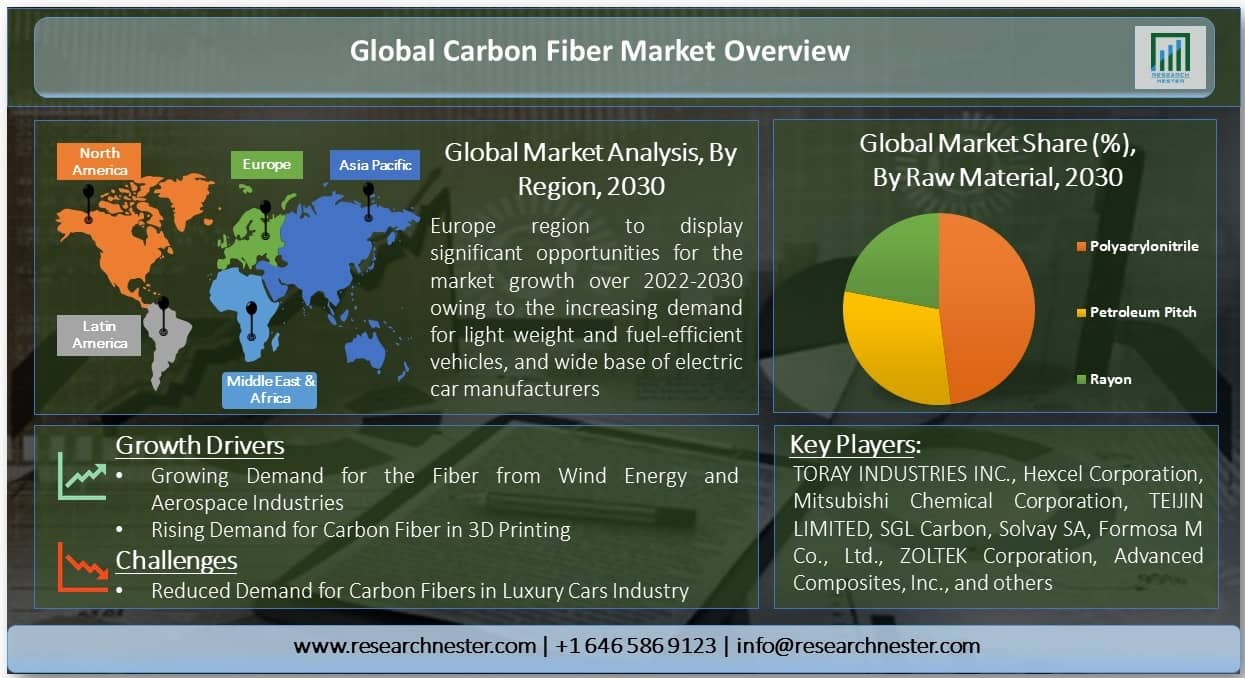 The market is segmented by end user into aerospace and defense, alternative energy, automotive, construction, sporting goods, and others, out of which, the aerospace and defense segment is anticipated to hold the largest share in the global carbon fiber market on account of the increasing demand for carbon fibers for the manufacturing satellite and commercial aircraft. In addition, high thermal connectivity of carbon fibers makes them suitable for producing space radiators, antennas, heat sinks and electronic enclosures, which is another factor assessed to drive the growth of the market segment in the future. Moreover, on the basis of raw material, the polyacrylonitrile segment is evaluated to grab the largest share ascribing to the largescale use of this type of carbon fiber in sporting goods, aerospace and defense, and automotive industries as a result of its high modulus and cost-effectiveness. CLICK TO DOWNLOAD SAMPLE REPORT

On the basis of geographical analysis, the global carbon fiber market is segmented into five major regions including North America, Europe, Asia Pacific, Latin America and the Middle East & Africa region. The market in Europe is estimated to occupy the largest share over the forecast period on the back of the growing demand for fuel-efficient and lightweight vehicles, and large base of electric car manufacturers in the region. For instance, more than 22 million units of light weight vehicles were produced in Europe in 2019, which is calculated to increase up to 24 million by the end of the year 2024. Apart from these, increasing investments of automotive manufacturers to develop cost-effective carbon composite materials and rising usage of carbon fibers in the regions aviation industry are also expected to boost market growth in the coming years. Additionally, the market in Asia Pacific is evaluated to witness the highest CAGR during the forecast period owing to the rapidly growing urbanization, escalating government spending on infrastructure projects in India and China, and presence of key market players in the region. 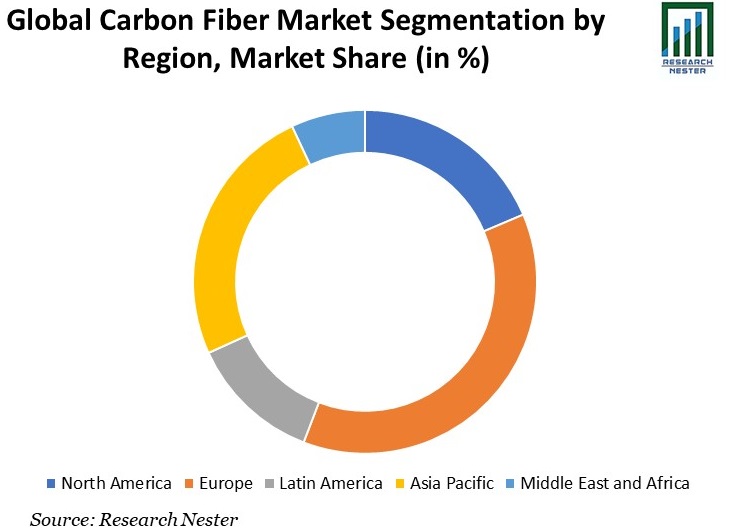 The global carbon fiber market is further classified on the basis of region as follows:

Our in-depth analysis of the global carbon fiber market includes the following segments:

What are the major factors driving the growth of the carbon fiber market?

What would be the CAGR of carbon fiber market over the forecast period?

What are the challenges affecting the carbon fiber market growth?

Decrease in demand for carbon fibers from luxury cars industry is estimated to hamper the market growth.

Which region will provide more business opportunities for growth of carbon fiber market in future?

Asia Pacific region will provide more business opportunities for market growth owing to the growing demand for fuel-efficient and lightweight vehicles, and large base of electric car manufacturers.

Who are the major players dominating the carbon fiber market?

What are the segments in the carbon fiber market?

The market is segmented by type, raw material, end user, and by region.

Which segment captures the largest market size in the end user segment in the carbon fiber market?

The aerospace and defense segment is anticipated to hold largest market size and is estimated to grow at a notable CAGR over the forecast period and display significant growth opportunities.