Cannabis or marijuana is a budding plant, belonging to the family of Cannabaceae. In several parts of the world, marijuana has been well-known for its use in psychoactive drugs and therapeutic use. For a long time, the use of cannabis was mostly restricted to medical purposes. However, in the last few years, the usage of marijuana has stretched out to consumable drinks such as cannabis-based beverages. Cannabis-based beverage companies have arrived in the marketplace to supply and cater the growing demand for cannabis-infused products. The recreational use of cannabis is far superior as compared to the medicinal usage, keeping illegal consumption into consideration.

The cannabis beverages market is projected to mark a CAGR of more than 15% between 2020 and 2028. The market is segmented by type, constituent, distribution channel, application, end-user, and region. Among product type segmentation, the non-alcoholic beverages segment holds the leading market share attributable to the increasing demand for smoke-free cannabis, awareness regarding the medical influence of marijuana on explicit health conditions, and legalization of recreational use of cannabis in certain regions. 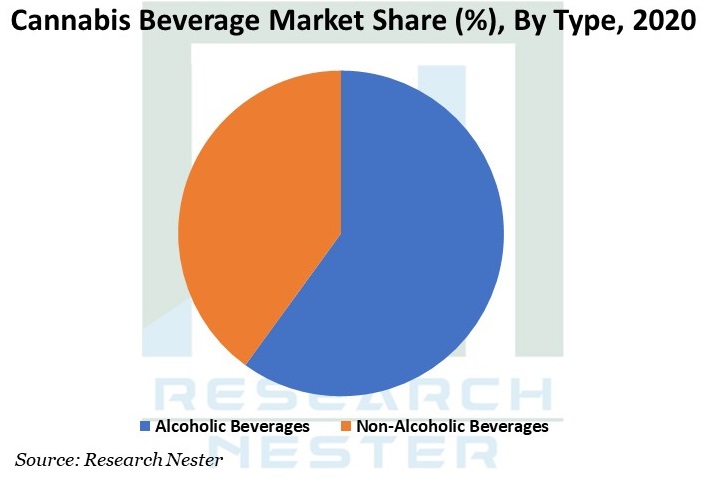 The rising popularity of wellness drinks

The legalization of cannabis for medical and recreational purposes has had a solid impact on the sales of alcoholic drinks. This results in many alcohol manufacturers investing in the rising fashion of marijuana-infused drinks. CLICK TO DOWNLOAD FREE SAMPLE

Customers are shifting from soft drinks to wellness drinks, which, in turn, led to an increase in sales of cannabis beverages. Additionally, the low sugar content in these drinks and consumers' preferences for these beverages as an alternative to cannabis smoking and consumption of marijuana-infused chocolates, cookies, brownies, and confectionaries, as they are considered to be unhealthy, are the major driving factors contributing towards the growth of the market. Off-trade sales channels, such as hotels, cafes, restaurants, clubs, and lounges are projected to boost the demand for the product among customers.

Various health benefits such as improved sleep patterns, restricted weight gain, relief from depression and anxiety, controlled blood pressure, and others, are predicted to boost the growth of the cannabis beverages globally during the forecast period.

Additionally, legalizing medical or recreational cannabis in certain regions has imparted significant positive impact on the sector. Over the past few years, public and private investments into Research and development for a safer form of consumption of cannabis are another noteworthy driving element which reinforced the market growth. There have been a noteworthy increase in the number of companies operating in this market which promotes the variety and quantity of products provided to the end-users. Such variants in the products is contributing further in order to boost the market demand.

Few health concerns accompanying the consumption of marijuana such as extreme anxiety, fear, distrust, panic, risk of depression, and blocks of memory formation might hamper the growth of the cannabis beverage market.

Our in-depth analysis of the cannabis beverage market includes the following segments:

North America has the leading market share in the global cannabis beverage market and is projected to dominate over the forecast period. The leading position is attributed to growing spending on cannabis beverages, the prevalence of legislation norms, and the presence of many private players in the region.

Uruguay and Canada have entirely legalized the use of marijuana for medicinal purposes. Liberal states in the US such as New York, New Jersey, Vermont, and California have also either legalized or are looking at ways to legalize the usage of marijuana. In total 33 states, District of Columbia, Guam, Puerto Rico, and U.S. Virgin Islands have allowable comprehensive, publicly available cannabis programs as per State Medical Marijuana Laws.

Europe is predicted to hold second position in the global cannabis beverages market, owing to the rising investment for cannabis beverages, growing awareness, and the rise in number of cannabis consumers in the region.
Additionally, the companies functioning in the region are launching products in order to sustain the growing trend of wellness drinks. Manchester-based CBD Ultra and Cloud 9 Brewing have launched the U.K.'s first CBD infused craft beer brewed with Cannabis Sativa extract.

The Cannabis Trades Association (CTA) is the oldest and biggest cannabinoid centric trade association for the UK and Europe. They work with all sectors of the hemp and cannabis industry for promoting good practice, providing practical advice, and ensuring consumers of legal cannabis and hemp products and also have the right to use top quality information.

Usage of cannabis is legalized in major parts of South and Central America, as well as Africa. Countries, such as Australia and Uruguay are also projected to witness noteworthy upliftment in product demand, in consequence of the legalization of marijuana for medical and recreational purposes.

The cannabis beverage market is further classified based on region as follows: